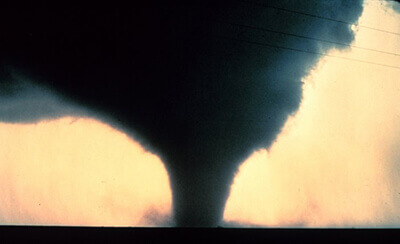 Tornado-related fatalities haven’t kept up with population growth in tornado-prone regions of the U.S. for the last hundred years, according to a new study. (NOAA photo) Download image

WEST LAFAYETTE, Ind. — The Louisiana Purchase in 1803 ushered in a movement of westward migration in the United States, and with new territory came new challenges – and weather phenomena. The rate of tornado-related fatalities increased faster than the rate of population growth until the start of the 20th century, according to a new study in the journal Weather, Climate, and Society.

Around 1916, that trend started to reverse. Ernest Agee, a professor of earth, atmospheric and planetary sciences at Purdue University, credits the decline in fatalities to better scientific understanding of tornadoes and technology to warn people of developing storm events. Although tornadoes claim fewer than 100 lives each year in the U.S. on average, there’s more work to be done to minimize tornado-related fatalities.

“We need to keep funding resources to improve observations and detection. The dual-polarization Doppler radar and high-resolution images of the newest GOES satellite have significantly enhanced our ability to detect and predict tornadoes,” Agee said. “However, even with the current technology and numerical simulation capability, precise location and tornado intensity need further refinement. A holistic approach to fatality prevention also relies on tornado-proof structures and preparedness plans from schools and businesses to homes and mobile park communities.”

Because the number and intensity of past tornadoes are largely unknown, Agee considered U.S. census data on population and a historical record of tornado fatalities from 1808 to 2017. Tornado deaths require a population and the occurrence of sufficiently strong tornadoes, making census data a good place to start.

The range of years in the study was split into two periods. Era A, which spans from 1808 to 1915, was characterized by little to no understanding of tornadoes and the start of population growth in tornado-prone regions of the country.

Era B, which spans from 1916 to 2017, ushered in a period of increased scientific understanding of extreme weather, improvements in communication and technology related to tornado prediction, public safety measures and the establishment of building codes, according to the study. The death per population index (DPI) began to decrease around this time in the 21-state tornado-prone region (which includes the Central Plains Alley, the Dixie Alley in the southeastern U.S. and much of the Midwest).

1950 marks the beginning of the modern tornado record, and that year the U.S. Weather Bureau lifted its ban on issuing tornado warnings to the public. Radar and satellites were introduced a few years later, allowing the identification of storms. The debut of the Weather Channel in 1982 paved the way for real-time communication of severe weather information to the general public.

Throughout Era B, Arkansas, Mississippi, Alabama and Oklahoma were found to be the deadliest tornado states. These states are located just south of the “centroid of tornado activity” (determined to be in Missouri by previous studies), which has drifted southeast over time, approaching the northeast corner of Arkansas near the end of the 20th century.

Tornadoes were responsible for only 10 fatalities in the U.S. in 2018, but on average, that number is closer to 70. Still, mobile homes and large sports venues are especially vulnerable in the event of a tornado, Agee said.

“Cities that have mobile home parks need to have storm shelters, and schools in tornado-prone regions should consider storm-safe pods,” he said. “In terms of warning people of incoming storms, social media has huge potential to save lives as well.”

A new weather radar was installed on top of Wang Hall in 2018, filling a gap in coverage, as Purdue is roughly 60 miles from the nearest National Weather Service radar. Data from the radar are available to the public at http://weather.eaps.purdue.edu/xtrra/xtrra.html.

The record of tornado fatalities in the U.S. for over two centuries (1808-2017) along with the decadal census records have been examined to search for historical trends. Particular attention is given to population growth and expansion into the tornado-prone regions of the country. Included are the Central Plains Alley, the Dixie Alley in the Southeastern states, and adjoining states in the Midwest that collectively encompass a 21-state rectangular region. The data record has been divided into two sub-intervals, Era A (1808-1915) and Era B (1916-2017), each consisting of three equal length periods. Era A is characterized by a growing and westward expanding population along with a basic absence of scientific knowledge, technology and communications (for prediction, detection and warning). This is followed by a renaissance of discovery and advancement in Era B that contributes to saving lives. The aforementioned periods are defined by notable events that help define the respective periods. A death per population index (DPI) is used to evaluate the 21 states in each era, which shows the rise of mean DPI values to a maximum of 1.50 at the end of Era A and a subsequent fall to 0.21 at the end of Era B. It is also shown for all three periods in Era B that the deadliest tornado states, in ranked order, are Arkansas, Mississippi, Alabama and Oklahoma. Suggestions are presented for ways to continue the decreasing trend in DPI, which would imply that the death rate increase is not as fast as the rate of population increase (or even a decreasing death rate).