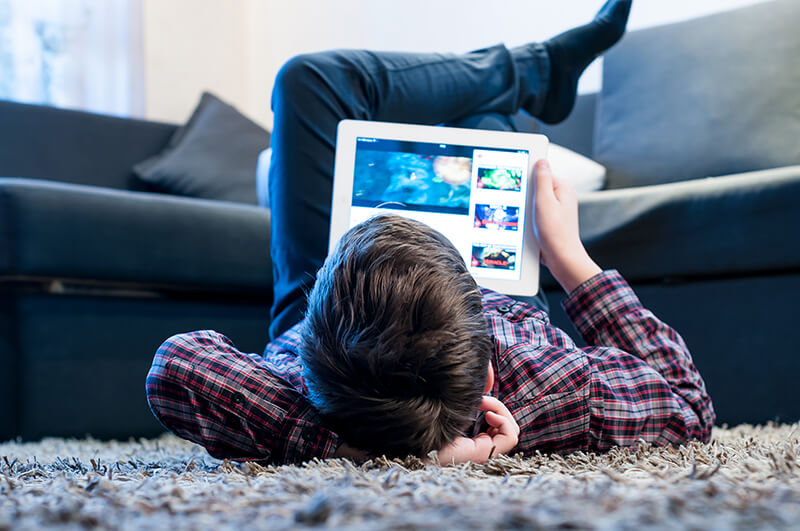 Watching TV, this individual could help the Rabbit Hole analyze the advertisements on their favorite channels. The Rabbit Hole software compiles all relevant information about a commercial, its copyright uses and audience ratings into a single database creating an “individual footprint” for each commercial. (iStockPhoto.com) Download image

Gustavo Valencia in Purdue’s School of Electrical and Computer Engineering is creating a software system called the Rabbit Hole that can track audience ratings, commercials’ copyrights, competitors’ investments and more for media agencies to analyze and improve their commercials’ impact.

“The Rabbit Hole determines how effective a given commercial is in generating interest and revenue for a specific product,” Valencia said. “For example, we could help a soda company’s marketing team figure out if their commercials are reaching their target audiences and are inspiring consumer soda buying.”

Television still leads all other media by over 50 percent in advertising-generated profits, according to a study by Ebiquity and Gain Theory.

“An advertiser’s goal is to broadcast their commercial and send a message,” Valencia said. “The media agencies producing these advertisements want to know if their work is directly translating to advertiser profits. We created the Rabbit Hole to solve this problem.”

Valencia is working on the Rabbit Hole in partnership with his brother’s company, Lathink, a Colombia-based advertisement producer. Lathink addresses the first obstacle in advertisement pre-production by streamlining and centralizing all the necessary materials needed to brainstorm, create and publicize a commercial.

The Rabbit Hole tackles the second challenge in advertisement post-production by monitoring specific channels’ audience ratings, tracking the commercial’s different variations and copyrights. The system can track this data for a commercial across different channels or countries, and can even compare competitors’ marketing strength.

“With all the relevant information about a commercial, the Rabbit Hole creates an individual footprint describing what audiences received the commercial, if it inspire them to buy the offered product and other data like these,” Valencia said.

The system asks families to capture a short video or audio clip of their TV on their smartphone or tablet application and answer a few brand remembrance and socio-demographic questions. Then, the families receive prizes, such as a gift card, coupon or extended TV content, for their participation, and the system analyzes the recordings’ advertisement content, adding the information to a central database.

“We will offer participants exclusive promotional content based on the information they send about their viewing habits and location,” Valencia said. “If a user watches an ad about a fast-food restaurant, the Rabbit Hole could send them specific information about upcoming promotions or sales also noting the closest restaurant for redemption.”

The Rabbit Hole’s database holds all relevant information about an advertising agency’s commercials and their uses, such as audience demographics and channels’ ratings. The database can also develop an accurate “individual footprint,” as Valencia calls it, for each commercial and its public offer content.

“The time is right for media agencies in Colombia that are looking for another content analysis option,” Valencia said. “My brother asked me, can you develop a modern and trustworthy analysis system that will answer our clients’ questions about their commercials? Since then, we have done that and more.”

The Rabbit Hole’s service will be offered first in Colombia for TV commercials, through the company Lathink. However, Valencia said the project could eventually expand to analyze advertisements in other countries, such as Brazil, Mexico or the United States, or on other platforms, such as radio or internet.

The Rabbit Hole project aligns with Purdue's "Giant Leaps" celebrating the university’s global advancements made in health, space, artificial intelligence and sustainability highlights as part of Purdue’s 150th anniversary. Those are the four themes of the yearlong celebration’s Ideas Festival, designed to showcase Purdue as an intellectual center solving real-world issues.

The technology is licensed through the Purdue Office of Technology Commercialization, a comprehensive technology transfer program.