WEST LAFAYETTE, Ind. – Tests to determine if you have cancer can be frightening, uncomfortable and time-consuming. Now, Purdue University researchers have developed and are commercializing a new method that could make early detection of cancer and other diseases easier, faster and less agonizing for patients. 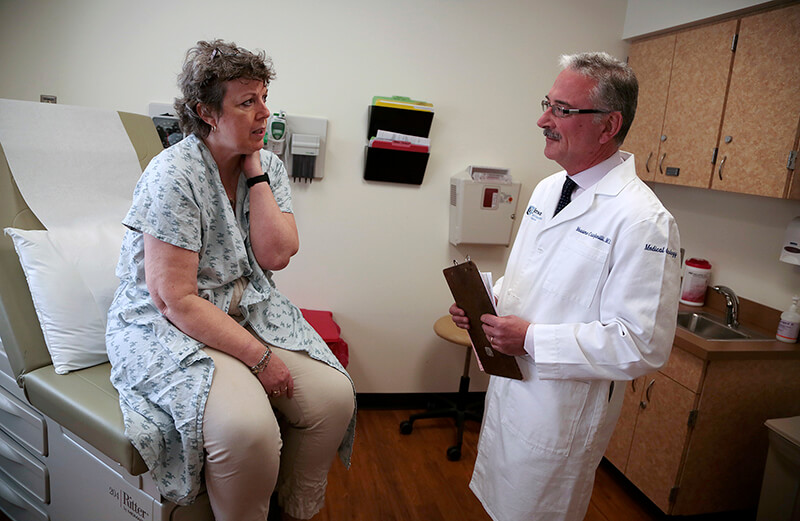 Patient Carole Linderman speaks to Dr. Massimo Cristofanilli before her blood is drawn for a liquid biopsy at Jefferson University Hospital in Philadelphia in 2015. A new type of blood test, a liquid biopsy, is transforming cancer treatment, sparing many patients the surgical and needle biopsies long needs to guide their care. The tests capture cancer cells or DNA that tumors shed into the blood, instead of analyzing tissue from the tumor itself. Tymora Analytical Operations advanced a Purdue patented innovation to use liquid biopsies for early detection of cancer and other diseases. (AP Photo/Jacqueline Larma) Download image

Tymora Analytical Operations advanced a Purdue patented innovation to use liquid biopsies for early detection of cancer and other diseases such as Alzheimer’s disease. Earlier detection of cancer, which strikes 1.7 million people in the United States each year and kills 609,640, is important in improving outcomes. Likewise, individuals diagnosed with Alzheimer’s disease, which the most common cause of dementia in the U.S., could benefit from earlier detection and treatment.

Liquid biopsies are a better option for many because they are less invasive, says W. Andy Tao, a professor of biochemistry, who is a member of the Purdue University Center for Cancer Research and the chief scientific officer for Tymora; and Anton Iliuk, Tymora’s chief technology officer. Tao was the lead researcher at Purdue in the development of the technology.

Other cancer research - focused on exosomes, which are found in blood, urine and saliva - has typically looked at the components that make up the DNA and RNA of patients. Tymora stands out since its research focuses on looking at the active proteins for detection.

“There is a need for a completely new approach to look at these diseases and analyzing them,” Iliuk said. “We believe using liquid biopsies in looking for specific active proteins can provide a missing piece of the puzzle in diagnosing and treating critical diseases.” 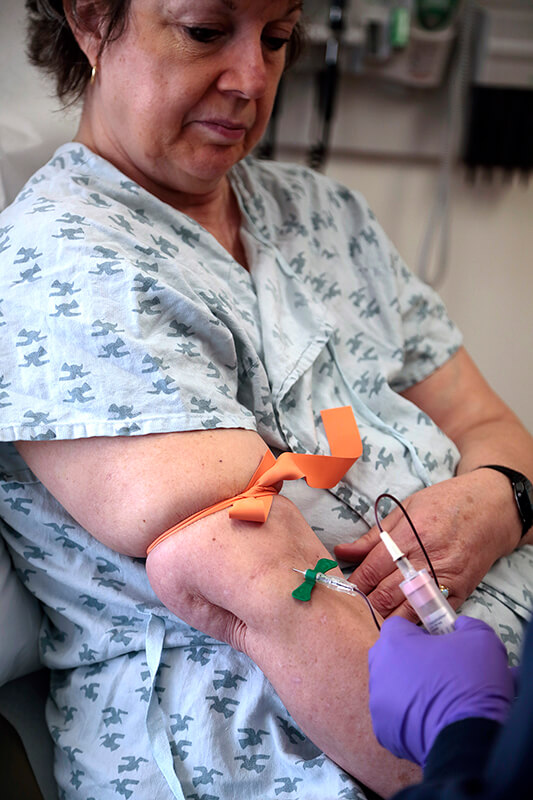 Patient Carole Linderman has her blood drawn for a liquid biopsy during an appointment at Jefferson University Hospital in Philadelphia in 2015. The promise of liquid biopsies is that they can be done periodically to monitor care. . (AP Photo/Jacqueline Larma) Download image

The researchers developed a technique with liquid biopsies, using urine, blood or saliva, and biomarkers for early cancer detection.

Despite the numerous research projects emerging in cancer detection, tissue biopsy remains the most prevalent method. According to Iliuk, almost 90 percent of patients still have to go through tissue biopsy.

For some patients, a tissue biopsy, or taking a sample of the tissue, is not an option because of the critical location of the tumor, leaving many without a concrete diagnosis. Tissue biopsies also can present the patients with side effects that could range from pain to, in some cases, death.

By better capturing exosomes, the researchers may better analyze the different active or modified proteins.

“This will ultimately provide medical professionals with a safer alternative to tissue biopsies,” Iliuk said. “Cancer produces different nanovesicles, also known as exosomes, than other cells. We are looking for more efficient ways to capture them in order to detect diseases earlier, specifically cancer.” 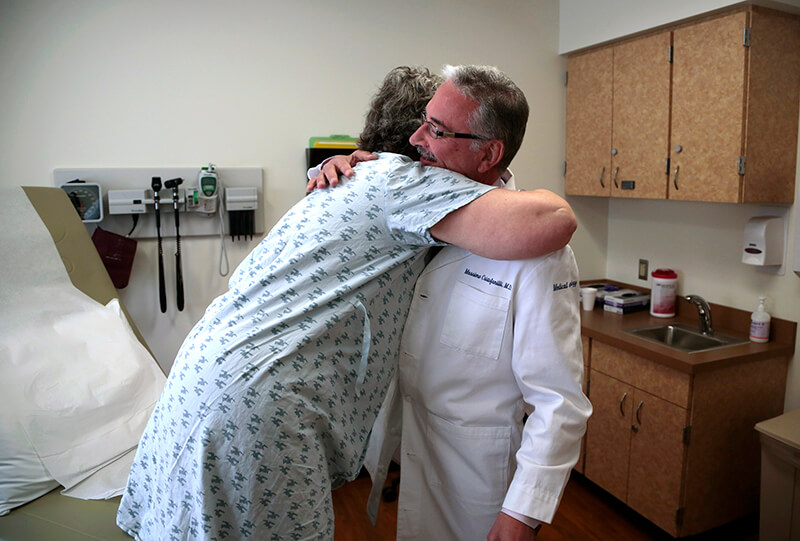 Patient Carole Linderman hugs Dr. Massimo Cristofanilli before her blood is drawn for a liquid biopsy during an appointment at Jefferson University Hosptial in Philadelphia in 2015. “Had this test not been available, we may not have known I had cancer on my spine until symptoms showed up,” which may have been too late for good treatment, she said. (AP Photo/Jacqueline Larma) Download image

The technology aligns with Purdue's "Giant Leaps" celebration, celebrating the university’s global advancements made in health, longevity and quality of life as part of Purdue’s 150th anniversary. This is one of the four themes of the yearlong celebration’s Ideas Festival, designed to showcase Purdue as an intellectual center solving real-world issues.

Although the research is currently mostly focused on bladder cancer detection through urine, Iliuk is optimistic that in the future this technology has the potential to be able detect any cancer or disease by continuing to identify the unique biomarkers attached to them.

Their new technology can also help health-care professionals provide patients with more efficient drugs for their illness. By using the similar process, they are able to identify which drugs would be effective for different patients.

Tymora is looking for partners who are interested in collaborating to further understand how their technology can assist in disease detection.