Purdue startup that plans to use ‘rockoons’ to launch small satellites into space wins $1,500 in Midwest business pitch competition 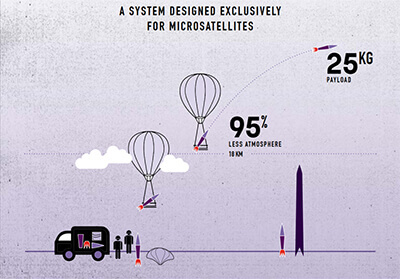 Leo Aerospace recently won $1,500 at the Final Four Business Pitch. The company plans to use “rockoons” (high altitude balloons) that lift rockets about 11 miles (18 kilometers) above Earth, where there is 95 percent less atmosphere to cause drag. That makes the rockoon less expensive to launch than a traditional rocket. The system works only for microsatellites. (Image provided) Download image

WEST LAFAYETTE, Ind. – A Purdue University-affiliated startup that plans to use “rockoons” to open access to space for microsatellite companies won third place in a Midwest business competition.

The judges at the Final Four Business Pitch awarded Leo Aerospace LLC, which plans to use "rockoons," or high-altitude balloons, that launch rockets into suborbital and orbital flights, $1,500 at the competition held July 31 at the 1871-Chicago Center for Technology and Entrepreneurship. The competition for the best university startups included students from Purdue, DePaul University, Michigan State University and the University of Illinois System.

Five startups that have been clients of the Purdue Foundry, an entrepreneurship and commercialization accelerator, took part in the competition: Leo Aerospace, FroYo XPress,    MediTrak, Predictive Wear and Spirrow Therapeutics.

“The Final Four Business Pitch competition was great exposure for all five of our companies to make connections with industry and thought leaders in Chicago and among the other universities,” said Riley Gibb, director of collaborations at the Foundry. “Our teams stood up very well among the other 15 teams and represented Purdue University exceptionally well.”

All five startups participated in the Burton D. Morgan Business Model Competition, four of them this past February.

“It was fantastic seeing the teams that competed in our business model competition less than six months ago be able to compete head to head with the best from other universities,”  said Arnold Chen, managing director of the Burton D. Morgan Center for Entrepreneurship. 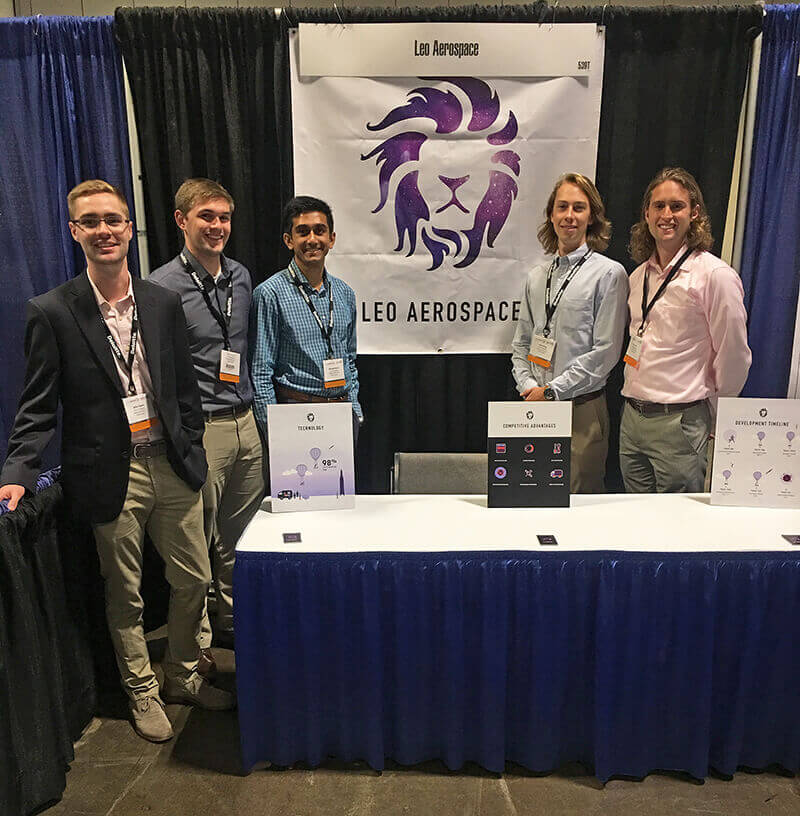 Leo Aerospace LLC was started by five then-Purdue University students as a club and then turned into a business. The founders are, from left, Mike Hepfer, head of product development; Drew Sherman, head of vehicle development; Abishek Murali, head of mission engineering; Dane Rudy; chief executive officer; and Bryce Prior, head of operations and strategy. (Image provided) Download image

Officials of Leo Aerospace, which took its name from Low Earth Orbit, say the company will revolutionize the space industry by giving priority service to microsatellite developers that now are secondary payloads for large rocket companies. Currently, developers have to wait to see if there is room left on large rockets carrying government payloads and often have to wait six months or more to find space on a rocket, a delay that can be quite costly. Those microsatellite developers also have limited options on which orbit their satellites are delivered to and when they are launched.

“We’re targeting the microsatellites by saying, ‘You don’t have to ride-share with anyone. We can guarantee you will be our only payload and we will be focused on you,’” said Drew Sherman, Leo Aerospace’s head of vehicle development. “’We will work with you exclusively to get you into orbit. You won’t have to worry about other payloads or getting dropped off in the wrong spot.’”

Abishek Murali, head of mission engineering, said a selling point for Leo Aerospace will be its flexibility and ability to meet customers’ needs. The company can tailor its launch vehicles and its operational capabilities to the exact needs of its clients.

“Our goal is to give people access to space. The only way to do that right now is to help people get their satellite into orbit. That's where we want to leave our mark,” he said.

The cost of sending a satellite into space can be up to $60,000 a kilogram. Leo Aerospace is confident it can lower that cost to launch microsatellites, which can weigh 1 to 50 kilograms. The rockoon, a hybrid of a rocket and high-altitude balloon, is less expensive to deploy than a traditional rocket since there is less drag because the rocket isn’t launched until the balloon is 11 miles above Earth, where there is 95 percent less atmosphere to cause drag.

“By doing that you can scale your rocket down much more efficiently,” said Sherman, who is pursuing a master’s degree at Purdue in engineering management with an emphasis on propulsion.

The rockoon was first used by the U.S. Air Force in the 1950s. Leo Aerospace can precisely launch the rocket by controlling the pitch and angle using core integration technology, for which it has filed patents.

Leo Aerospace plans to initially launch the rockoons from existing spaceports licensed by the Federal Aviation Administration. The spaceports stretch from the Kennedy Space Center in Florida to Kodiak Island in Alaska.

Leo Aerospace plans to reuse the balloons for future launches, but the rockets will be used only once, said Murali, who is pursuing a graduate degree at Purdue in engineering management with an emphasis on dynamics and control systems.

Leo Aerospace won $15,000 in March through the Burton D. Morgan Business Model Competition. The company plans to seek Series A funding in the next two years.

A video of Leo Aerospace team members at work can be seen at https://www.youtube.com/watch?v=zVI6-k99sb4.

The company was started by five then-Purdue students as a club that they then decided to turn into a business, receiving guidance from the Purdue Foundry, an entrepreneurship and commercialization accelerator in Discovery Park's Burton D. Morgan Center for Entrepreneurship at Purdue. The rocket scientists developed their business plan and learned what they needed to do to move forward.

“We want to be part of the space market,” Murali said. “People are interested in space and creating technologies that not only can operate in space but also help people back on Earth.  What we're trying to do is help them get there.”