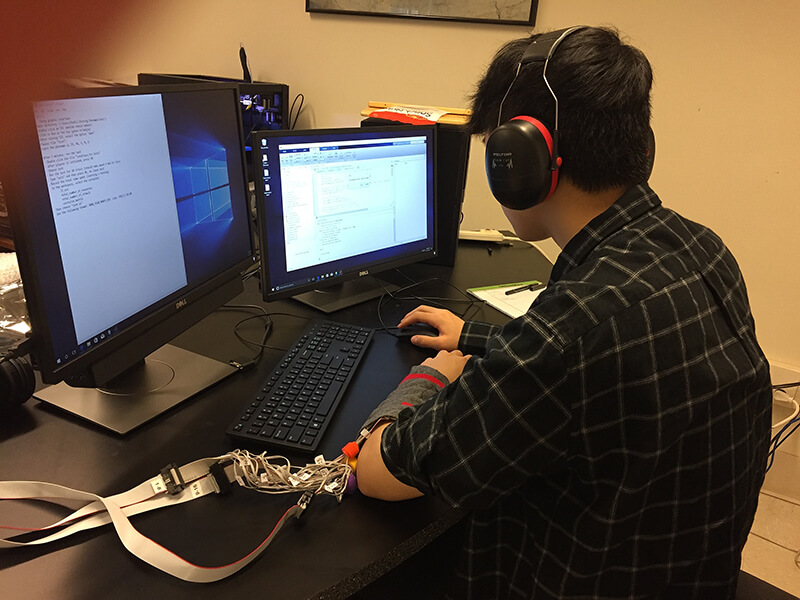 Kevin Tan, a participant in the study, learns English sounds through haptic communication technology developed by Purdue researchers. The device plays specific sensations on the user’s forearm, as he notes the corresponding English phoneme, or the smallest unit of sound. (Image provided) Download image

WEST LAFAYETTE, Ind. – Purdue University researchers have developed a method of sending messages in English by using vibrations on a person’s skin.

Hong Z. Tan, Purdue professor of electrical and computer engineering, said she developed the haptic technology after being challenged by Facebook.

“They wanted to know if it was possible to transmit messages and speech through the skin. We thought it might be possible, and we could give it a try,” she said.

Tan and her research group invented the device, which plays a specific vibration that is assigned to a given English phoneme, or the smallest unit of sound, on the user’s forearm.

The sensations coordinate to the phonemes’ formation in the mouth. Sounds at the front of the mouth, such as a “p” or “b,” produce vibrations on the wrist while sounds at the back, such as “g” or “k,” produce vibrations near the elbow. Tan also encoded the device to generate distinct sensations for each speech trait: consonants or vowels, voiced or unvoiced sounds, and long or short vowels.

“In testing, we found that people never confused a consonant with a vowel because the sensations are distinct,” Tan said. “We start with a small group of phonemes, then we gradually train people up to 500 words. Everybody’s performance varies, but those who did really well acquired one English word per minute.”

The research was part of a yearlong study done with researchers from the Massachusetts Institute of Technology and Facebook Inc.

The easy-to-learn technology could have numerous applications as an alternative communication method. Users need only a few hours to learn the vibrations’ associated to different sounds, words or meanings.

In the current prototype, Tan encoded English language’s phonemes and words to prove the communicative ability of the technology. However, she said she believes the technology could eventually transmit other languages or even environmental stimulus from individual coded maps.

“From the beginning, I really wanted this technology to be a general communication project and to prove that information can be transmitted through touch,” Tan said. “People with sensory deficits need to be able to hear a car honking or the faucet running, so we can create a sensation specifically for that. Or, for example, if people are running, we can set simple messages to let them monitor their progress.”

Any skin-based communication technology from this project will be patented through the Purdue Research Foundation’s Office of Technology Commercialization, an economic development and technology transfer program.