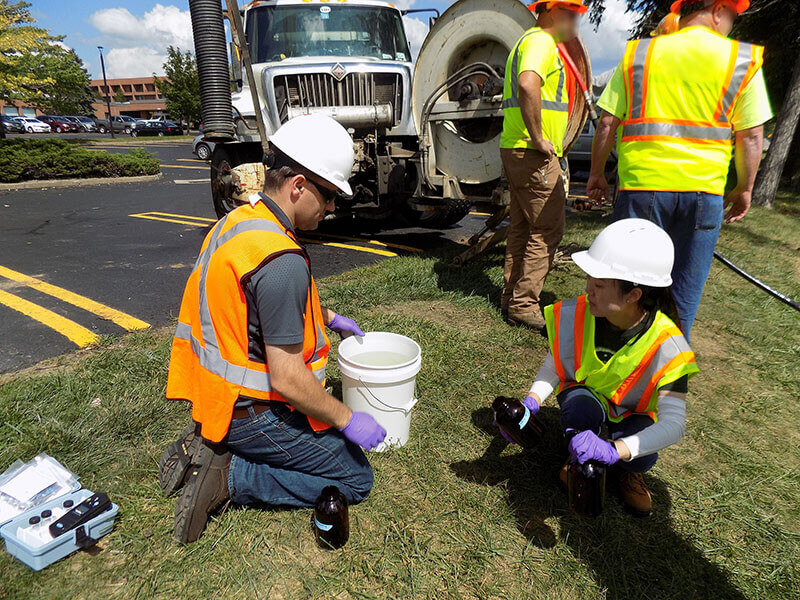 Purdue University assistant professor Andrew Whelton (left) says that although a process of repairing storm water culverts has been used for approximately 30 years, still not much is known about the chemicals released into the water during the repairs. (Purdue University photo)

Of the 32 states that responded to the researchers’ request for information, only four states required water testing after the construction procedure, and the test methods used were often not the same. Nine states had no formal requirements to oversee or monitor the procedure’s environmental impacts.

Andrew Whelton, associate professor of civil engineering and environmental and ecological engineering, says many states and municipalities are beginning to re-examine how CIPP is used and lessen the potential harm to nearby water and air.

“State transportation agencies want to repair their infrastructure without having to worry about fish kills, drinking water contamination, or chemical incident cleanup,” he says. “There have been some significant incidents.”

The process, if not well controlled, can release a worrisome mix of hazardous chemicals into the air and water, although what exactly is discharged, and how that varies site to site, is just beginning to be understood. A common water pipe repair process that uses resin to build a new liner in existing pipe is coming under increased scrutiny because of concerns about environmental and health effects, say researchers at Purdue University. (Purdue University photo) Download image

"In 2014,  waste produced at an Alabama culvert repair site was found to be acutely contaminated and dissolved a freshwater organism,” Whelton says. "While the technology has been around for 30 years, there are very few laboratory and field studies on possible environmental effects."

Previous research found that the chemical plume created during the steam-based CIPP installation process released chemical vapors, not just steam. It also contained known air pollutants, suspected endocrine-disrupting chemicals, and known and suspected carcinogens. The California Department of Public Health issued a statewide notice about potential hazards after its own investigation and the prior study.

As part of the review, graduate student Kyungyeon Ra stated that at one Colorado site, “People reported an odor in their drinking water.”

Upon investigation, the community discovered high styrene levels in their drinking water, which were traced back to an upstream storm water culvert repair gone wrong, she said.

As part of her research, Kyungyeon found that although styrene — suspected to be a carcinogen — was the chemical most often reported in the 13 incidents studied, acetone, benzene, trimethylbenzenes, among others, were also sometimes found.

Chad Jafvert, a professor of civil engineering and environmental and ecological engineering, says the purpose of the research is to better understand CIPP risks and incident causes.

“This research is being performed to identify any environmental exposures from CIPP and find ways to improve the practice to make this technology safer for the environment and for people,” Jafvert said.

John Howarter, assistant professor of civil engineering and environmental and ecological engineering, echoed the need for more data and open communication regarding the risks of infrastructure repair. "This report summarized data from many independent state agencies; being able to see the big picture will help reduce incident risks," he said.

Based on the research team’s findings, they recommend that those who perform, oversee, and monitor CIPP repairs enact several precautions until more research is conducted. Recommendations include:

• Contractors should use impermeable plastic sheets immediately upstream and downstream of the pipe to prevent materials from entering the environment.

• Water flow should be diverted from the pipe until a complete resin cure has been established. This can vary depending on the material used, as well as the thickness of the material, the curing method, the condition of the pipe, and the ambient temperature.

• The new CIPP should be rinsed with water and the waste collected.

• Nearby waters should be tested before and after the repair for a variety of chemicals, not just styrene.

The study follows prior work by several transportation agencies and Purdue University researchers to better understand how to limit chemical emissions and environmental impacts.

Cured-in-place pipe (CIPP) technology has been used to rehabilitate sanitary sewer, storm sewer, and drinking water pipes. However, utilities, regulators, and health officials have raised environmental, occupational, and public health concerns regarding chemical emissions into air and water. To better understand emissions into water, available literature was reviewed. Water contamination has been documented in 10 states and Canada because of the release of uncured resin, solvents, manufacturing byproducts, and wastes during and after construction. Odor, fish kill, and drinking water contamination incidents have been reported. The few field- and bench-scale studies available show that a variety of volatile organic compounds and semivolatile organic compounds have been released into water and contamination was detected for several months. CIPP waste was acutely toxic to aquatic organisms. Chemical release is likely influenced by formulation, installation, and environmental conditions. CIPP installation and inspection recommendations were suggested. Studies are needed to develop evidence-based construction and monitoring practices to minimize risks.