Antifreeze is poisonous to pets and humans, so why keep it around? 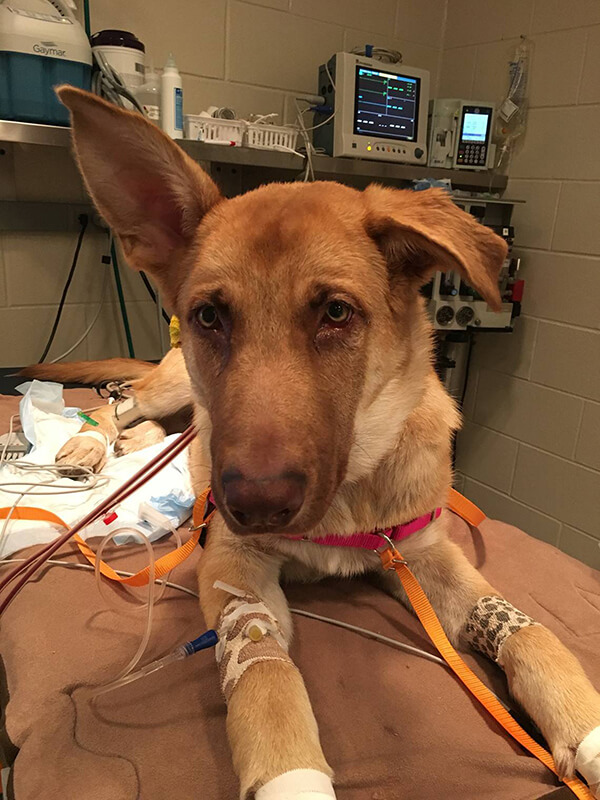 Gunner, a young German Shepherd mix, got into ethylenglycol one night but his owners recognized the clinical signs early enough and brought him to Purdue, where he underwent a single dialysis treatment the same night to clean his blood of the toxin. Photo by Purdue University. Download image

WEST LAFAYETTE, Ind. — As it gets colder, more people will take out the antifreeze to keep their radiator from freezing, but the brightly colored liquid can cause more harm than good for pets and children alike.

Ethylene glycol, or antifreeze, is a brightly colored, sweet tasting liquid found in most garages in the U.S. It also is deadly to pets and humans if ingested, says Dr. Sarah Steinbach, assistant professor of small animal internal medicine in the Purdue University College of Veterinary Medicine.

“As it gets colder and colder, we will see more and more cases of ethylene glycol poisoning, unfortunately,” she says. “Pets who have ingested the liquid may present as if they were intoxicated because ethylene glycol is an alcohol.”

Steinbach says that pets can be either hyperactive or lethargic, nauseous and wobbly after ingesting the toxic chemical. If owners notice these signs or symptoms, the pet should be rushed to the nearest veterinarian.

“Ethylene glycol itself is not toxic, but when it is metabolized in the body, it becomes severely toxic to the kidneys,” she says. “It causes some of the most severe kidney damage that we see.”

Antifreeze poisoning is commonly seen in curious dogs that get into the liquid by accident, but it also is toxic to cats. Steinbach says that even just a little ethylene glycol licked off a cat’s fur could be enough to cause the cat harm.

“They might get into the garage and go under the car where the antifreeze could be dripping,” she says. “When they clean themselves, they may ingest it and that is enough.”

If the pet is seen soon enough, they can be saved. Toxic levels usually peak within three hours after ingestion. Manifestation of kidney failure may only be evident after roughly a day in cats, and 2-3 days in dogs. Early intervention is key in saving these animals, Steinbach says.

The most efficient way of treating ethylene glycol intoxication in dogs and cats is to remove the toxin directly from the animals' body with a procedure call hemodialysis.

“We recently saw Gunner, a young German Shepherd mix. Curious as he was, he got into ethylenglycol one night. Luckily his owners recognized the clinical signs early enough and brought him to Purdue,” she says.

He underwent a single dialysis treatment the same night to clean his blood of the toxin. The next afternoon he was able to go home.

“Some poison hotlines, and also some veterinarians, may not think of dialysis as an option or don’t know that it is available, but we do have it available here at Purdue,” Steinbach says.

“The Purdue University Veterinary Teaching Hospital has a 24/7 emergency service. Our emergency room veterinarians will discuss the best interim options with a referring veterinarian until the pet can be presented here for treatment,” Steinbach says.

Her best recommendation for avoiding antifreeze poisoning is to simply not have it around.

“Don’t keep it around unless you absolutely have to” Steinbach says. “It does the same thing to humans that it does to dogs. It is sweet. It is a funny color. Kids can be drawn to it and ingest it before you know what happened. There are other antifreeze options that do not contain ethylene glycol. If you need to use it or have it around, make sure it is appropriately stored where no pets or children have access to it.”

If you want to know more about hemodialysis in pets, please visit the website of the Purdue University Veterinary Hemodialysis Service www.vet.purdue.edu/hemodialysis.