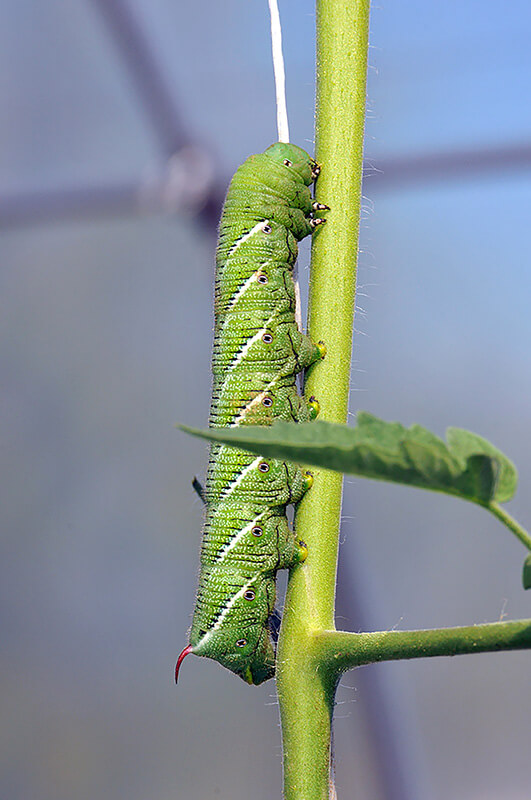 WEST LAFAYETTE, Ind. – Growers of tomatoes, cucumbers and other vegetables can extend their growing season and increase yield by placing high tunnels over their cold-sensitive crops, but those tunnels don’t provide the pest protection that has long been assumed.

High tunnels, also known as hoop houses, consist of stretched plastic over large metal frames which trap solar radiation warming the environment within. In temperate environments, they protect plants from the cold, allowing earlier plantings and later harvests of fruits, vegetables and flowers. Ricky Foster, a Purdue professor of entomology, said it has long been thought that the enclosed nature of high tunnels kept insects from getting into the structure and causing much damage to plants inside, so he decided to test the theory.

“Our data clearly show that is not true,” said Foster, whose results were published in the journal Pest Management Science.

Foster and collaborators tested plants from three different plant families and the pests that are most often associated with those crops - tomatoes and hornworms; broccoli and the cabbage looper, imported cabbageworm and diamondback moth; and cucumber and the cucumber beetle. Over two years, the researchers found increased presence of the pests in high tunnels when compared with adjacent open field plots.

The situation with tomatoes was especially surprising, Foster said. 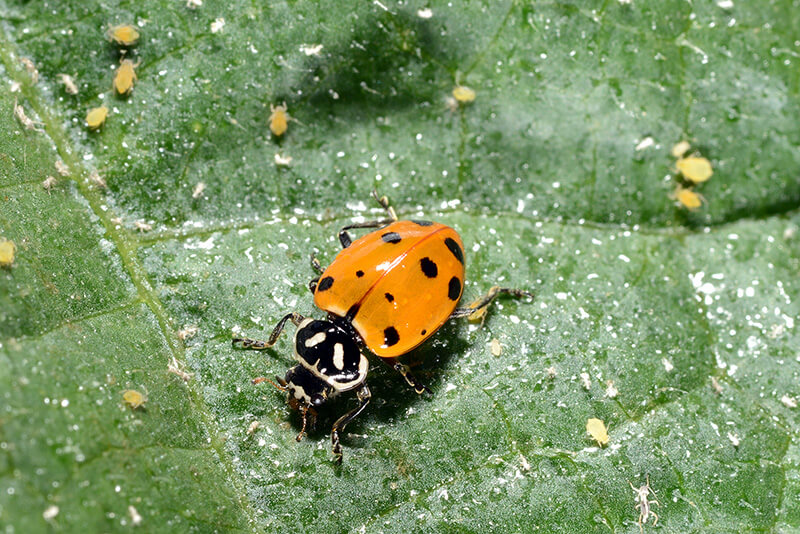 Predators like the lady beetle are important components of vegetable production systems. Purdue researcher Laura Ingwell is working to find the right size insect exclusion screen to keep pests out but allow predators in. (Photo by John Obermeyer) Download image

“In field situations, hornworms are kind of an anomaly. They’re there, but not in great numbers. We found that in high tunnels, they just exploded,” Foster said. “There was just nothing green left on the plants. There were just stems hanging on them.”

While the study didn’t determine how insects are getting to plants, Foster thinks there is a simple explanation.

During warm days, the sides of high tunnels must be rolled up to keep temperatures from reaching 120 degrees or more. That gives insects access to plants. When those insects leave plants they’ve fed on, they are known to usually fly straight up. In a high tunnel system, those insects hit the top of the tunnel and are trapped. Foster believes trapped insects, in addition to daily newcomers, increase the insect pressure in the tunnels.

“We have to ventilate the tunnels by rolling up the sides, and that basically opens it up for any type of insect that wants to come in,” Foster said.

Laura Ingwell, a postdoctoral researcher at Purdue, is working to solve the problem. She has evaluated the use of insect exclusion screens to cover the ventilation openings in high tunnels. The trick is to exclude pests without interfering with necessary ventilation and movement of natural enemies into the tunnels. To achieve this goal, Ingwell has evaluated three different screens with varying pore size.

Ingwell is also testing the benefits of adding flowers to the rows of produce under high tunnels. She has seen increases in beneficial natural enemies when zinnia and gomphrena, which growers could sell, were incorporated into tomato and cucumber production systems.

“We saw a higher diversity and abundance of predators and less pest outbreaks on the focal produce crops,” Ingwell said. “The flowers offer alternative food for a lot of the beneficial insects. They’ll feed on the pest insects, but they also need pollen and nectar for their diets.”

Ingwell will continue to research testing screen sizes and other methods for reducing pest pressures in high tunnels.

The USDA-National Institute of Food and Agriculture​ funded Foster and Ingwell’s research.

High Tunnels: Protection for rather than from insect pests?

BACKGROUND: High tunnels are a season extension tool creating a hybrid of field and greenhouse growing conditions. High tunnels have recently increased in the U.S. and thus research on their management is lacking. One purported advantage of these structures is protection from common field pests, but evidence to support this claim is lacking. We compared insect pest populations in high tunnels with field production over two years on three crops: tomato, broccoli and cucumber.