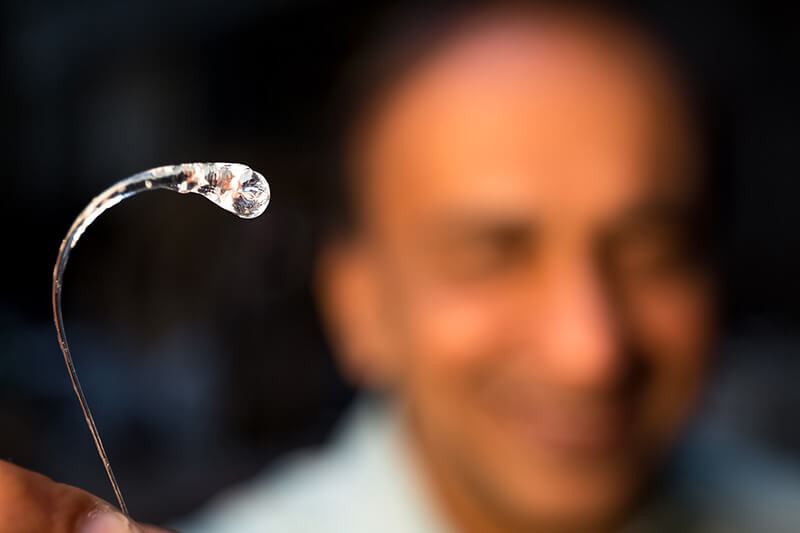 WEST LAFAYETTE, Ind. – Small glass structures resembling tadpoles that can withstand the blows of a hammer and yet burst into powdery dust by simply snipping their threadlike tails have been a source of fascination and mystery since they were discovered in the 17th century.

Now an international research team has pinpointed the source of the bizarre shatter-resistant behavior behind Prince Rupert’s drops. The work was a collaboration of researchers from Purdue University, the University of Cambridge in the UK and Tallinn University of Technology in Estonia.

“Since the seventeenth century, famous scientists and natural philosophers have been trying to understand the exceptional properties of these drops,” said Srinivasan Chandrasekar, a Purdue professor of industrial engineering and director of the university’s Center for Materials Processing and Tribology. “Rupert’s drops have been a curiosity for about 400 years.”

Germany’s Prince Rupert brought five of the enigmatic drops to England and presented them to King Charles II, who became interested in their extraordinary properties.

“On one hand, the head can withstand hammering, and on the other hand, the tail can be broken with just the slightest finger pressure, and within a few microseconds the entire thing shatters into fine powder with an accompanying sharp popping noise,” Chandrasekar said.

In new findings, the researchers used a technique called integrated photoelasticity, pioneered by Tallinn University scientist Hillar Aben, who is lead author of a paper published in the journal Applied Physics Letters (doi: http://dx.doi.org/10.1063/1.4971339). A YouTube video is available at https://youtu.be/lt-zvsGvtqg.

The measurements reveal the complex stress distribution in the drop as rainbow-colored bands when viewed through polarizing filters. Mathematical techniques, similar to those used in reconstructing 3-D information from medical CT scans, are then used to precisely recover the stresses based on the band patterns.

The new research is an extension of work performed more than 20 years ago by Chandrasekar and Cambridge physicist Munawar Chaudhri, who is the corresponding author on the Applied Physics Letters paper. In their 1994 work, they showed, using high-speed photographic analysis of drop disintegration at nearly 1 million frames per second, individual cracks accelerating from the drop’s tail toward the head at more than 4,000 mph. This explained their explosive disintegration when the tail was snipped off, an intriguing property of the drops.

While the 1994 research paper focused on the tail, the new research concentrates on the head’s amazing shatter-resistant behavior.

Findings showed the high strength of the head comes from compressive stresses calculated at around 50 tons per square inch, making them as strong as some grades of steel.

The drops, also known as Batavian tears, are made of glass having a “high thermal expansion coefficient,” which is needed to create the compressive residual stresses that provide the shatter-resistance. They are produced by dropping red hot blobs of molten soda-lime or flint glass into cold water, quickly cooling in a process called quenching. It is similar to processes used to make shatter-resistant glasses like those in today’s cellphone screens. 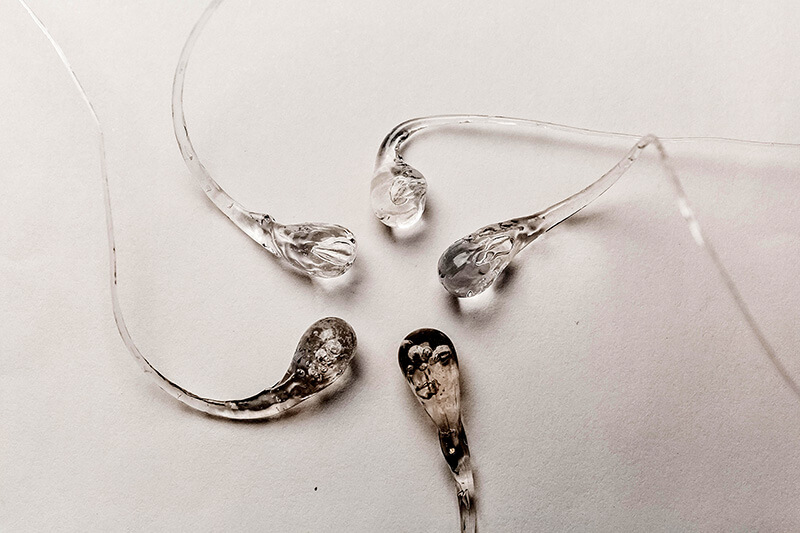 Prince Rupert’s drops, glass structures resembling tadpoles, can withstand the blows of a hammer and yet burst into powdery dust at the slightest touch of their threadlike tails. Now researchers understand why. (Purdue University image/ Trevor Mahlmann) Download image

“The first patents to strengthen glass were in the 19th century, so there was a time lag of more than 200 years,” Chandrasekar said.

On cooling down and solidifying, the drops form in a tadpole shape with bulbous head and long threadlike tail, which combined, are about four inches long. The surface of the drops cools faster than the interior, producing a combination of compressive stresses on the surface, and compensating tensile – or pulling - stresses in the interior of the drops.

“The tensile stress is what usually causes materials to fracture analogous to tearing a sheet of paper in half,” said Purdue postdoctoral associate Koushik Viswanathan, a co-author of the paper. “But if you could change the tensile stress to a compressive stress, then it becomes difficult for cracks to grow, and this is what happens in the head portion of the Prince Rupert’s drops,” he said.

As recently as 2013, published findings have proposed incorrect solutions to the riddle of the drop’s shatter-resistant strength.

The research paper was authored by Aben and fellow Tallinn University of Technology researchers Johan Anton and Marella Ois; Purdue’s Viswanathan and Chandrasekar; and Cambridge’s Chaudhri.

The work was supported by Estonian Research Council, the National Science Foundation and the U.S. Army Research Office.

Note to Journalists: A copy of the research paper is available from Emil Venere, Purdue News Service, at 765-494-4709, venere@purdue.edu. A YouTube video is available at https://youtu.be/lt-zvsGvtqg and other multimedia are available on Google Drive at https://goo.gl/aFHq68. The materials were prepared by Erin Easterling, digital producer for the Purdue College of Engineering, 765-496-3388, easterling@purdue.edu.

On the extraordinary strength of Prince Rupert’s drops

Prince Rupert’s drops (PRDs), also known as Batavian tears, have been in existence since the early 17th century. They are made of a silicate glass of a high thermal expansion coefficient and have the shape of a tadpole. Typically, the diameter of the head of a PRD is in the range of 5–15 mm and that of the tail is 0.5 to 3.0 mm. PRDs have exceptional strength properties: the head of a PRD can withstand impact with a small hammer, or compression between tungsten carbide platens to high loads of 15 000 N, but the tail can be broken with just finger pressure leading to catastrophic disintegration of the PRD. We show here that the high strength of a PRD comes from large surface compressive stresses in the range of 400–700MPa, determined using techniques of integrated photoelasticity. The surface compressive stresses can suppress Hertzian cone cracking during impact with a small hammer or compression between platens. Finally, it is argued that when the compressive force on a PRD is very high, plasticity in the PRD occurs, which leads to its eventual destruction with increasing load.