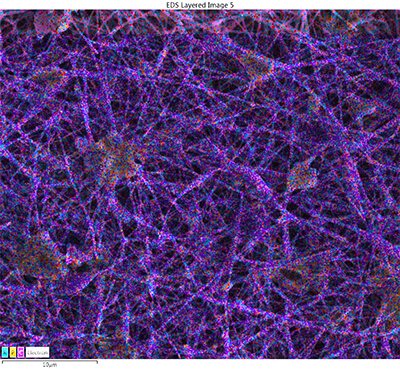 WEST LAFAYETTE, Ind. - Researchers are making progress in developing rechargeable batteries based on potassium, a potential alternative to lithium that’s less expensive and far more plentiful, and also have shown how to derive carbon for battery electrodes from old tires.

“With the growth of rechargeable batteries for electronic devices, electric vehicles and power grid applications, there has been growing concern about the sustainability and cost of lithium,” said Vilas G. Pol, an associate professor in the Davidson School of Chemical Engineering at Purdue University. “In the last decade, there has been rapid progress in the investigation of metal-ion batteries beyond lithium, such as sodium and potassium.”

Because of its greater abundance and lower cost, potassium shows promise for large-scale electricity storage on the power grid.

“The intermittent energy generated from solar and wind requires new energy storage systems for the grid,” Pol said. “However, the limited global availability of lithium resources and high cost of extraction hinder the application of lithium-ion batteries for such large-scale energy storage. This demands alternative energy storage devices that are based on earth-abundant elements.”

Potassium is about eight times more abundant than lithium and one-tenth the cost, he said.

Three research papers on the potassium-ion battery work were published this month, in collaborations with the U.S. Department of Energy’s Oak Ridge National Laboratory and National Cheng Kung University in Taiwan.

“We initiated this program almost a year ago, and there are not many groups in the world working on potassium-ion batteries,” Pol said.

The three papers were published in ACS Applied Materials and Interfaces, Chemical Communications and the Journal of the Electrochemical Society.

In one paper, the researchers describe a new design using carbon nanofibers as the anode. Batteries have two electrodes, called an anode and a cathode. The anodes in most of today's lithium-ion batteries are made of graphite. Lithium ions are contained in a liquid called an electrolyte, and these ions are stored in the anode during recharging.

New findings showed that batteries with anodes made of carbon nanofibers are promising. The paper is available at DOI: 10.1021/acsami.7b02476.

“The carbon nanofibers demonstrate great potential as an anode material for potassium-ion batteries,” Pol said. “We studied batteries for up to 1,900 charge-discharge cycles, which is pretty remarkable.”

The carbon nanofibers were created with a process called electrospinning, where high voltage is used to pull a charged polymeric solution between two electrodes, and the polymer fibers are then turned into carbon fibers.

The batteries showed “reasonable capacity” after being charged for only six minutes, having a capacity of 110 milliamp hours per gram, one-third of the capacity achieved after 10 hours of conventional lithium ion battery charging, he said.

“Usually, you would get very limited capacity after only six minutes because that’s not enough time to charge a conventional battery,” Pol said. “However, carbon nanofibers allow the battery to be charged much faster because the ions only have to travel a very short distance. The typical cellphone battery contains particles that are 15-20 micrometers in diameter, which is a much greater distance then this fiber-like architecture, and that’s why it takes two to three hours to charge your phone.”

The design eliminates the need for a “binder,” or a polymer gel to hold graphite powder in place. A nanofiber network instead holds the potassium particles, an approach that could decrease the battery’s weight.

The nanofibers were “oxygen functionalized,” meaning oxygen molecules are attached to their surface, reducing further corrosion from the acidic electrolyte. They also were functionalized with nitrogen molecules to increase electrical conductivity.

In a second paper, plate-like structures of ceramic, electrically conductive materials called MXenes were used to create a new type of potassium-ion battery.

During the charging process, ions are said to intercalate, meaning they are forced by electric current to move between layers of the carbon anode, building up a charge. Because potassium has a larger atomic diameter than lithium, it is more difficult for it to intercalate.

However, MXenes may allow researchers to sidestep this obstacle. The researchers are the first to report findings on the performance of plate-like electrode structures made of an MXene called titanium carbonitride.

“Usually ceramics are not electrochemically active, but MXenes are because you have a brick-like structure, and the ions can be inserted between these bricks during charging,” Pol said. “We have shown that potassium does charge and discharge effectively if you tune the material’s morphology and structure.”

Using potassium also could bring less expensive batteries by replacing copper with aluminum as a “current collector” for anodes. Lithium-ion batteries require copper for the purpose, whereas aluminum can be used instead in the potassium-ion batteries.

In a third paper, carbon was derived from waste tires to create carbon anodes for a potassium-ion battery. The tires were reduced to a form of carbon called hard carbon through a chemical-treatment process followed by a procedure called pyrolysis. The paper is available at DOI: 10.1149/2.1391706jes.

“The recycling of waste-tire rubber is of critical importance since the discarded tires pose serious environmental and health hazards to our society,” Pol said. “Here, we report a new application for hard-carbon materials derived from waste tires as anodes in potassium-ion batteries.”

“This study demonstrates how material engineering of carbon can address some of the issues resulting from bulkier potassium-ion intercalation, and may bring possible strategies to improve performance of these batteries in the future,” he said.

Purdue chemical engineering graduate student Ryan A. Adams led much of the research.   His research is co-directed by Vilas Pol and Arvind Varma, R. Games Slayter Distinguished Professor of Chemical Engineering.  A full listing of the papers’ co-authors is available in the abstracts.

The research was supported by Purdue’s Davidson School of Chemical Engineering, Oak Ridge National Laboratory’s Technology Innovation Program and Laboratory-Directed Research and Development Program, the DOE Office of Science, Office of Basic Energy Sciences and the DOE Office of Energy Efficiency and Renewable Energy. The Purdue researchers have filed a general patent on potassium-ion batteries through the Purdue Research Foundation’s Office of Technology Commercialization.

Note to Journalists: The research papers are available using the links in the news release or from Emil Venere, 765-494-4709, venere@purdue.edu

Carbon nanofibers produced by electrospinning of polyacrylonitrile polymer and subsequent carbonization were tested as freestanding potassium-ion anodes. The effect of oxygen functionalization on K-ion carbon anode performance was tested for the first time via plasma oxidation of prepared carbon nanofibers. The produced materials exhibited exceptional cycling stability through the amorphous carbon structuring and 1-dimensional architecture accommodating significant material expansion upon K+ intercalation, resulting in a stable capacity of 170 mAh g-1 after 1900 cycles at 1C rate for N-rich carbon nanofibers. Excellent rate performance of 110 mAh g-1 at 10C rate, as compared to 230 mAh g-1 at C/10 rate, resulted from the pseudo-capacitance K ion surface storage mechanism and the increased K+ solid diffusion coefficient in carbon nanofibers as compared to graphite. Plasma oxidation treatment augmented surface pseudo-capacitive storage of K+ by oxygen functionalities, but increased material charge transfer resistance as compared to N-rich carbon fibers. Ex-situ characterization revealed that the 1-dimensional structure was maintained throughout cycling, despite the increase in graphitic interlattice spacing from 0.37 nm to 0.46 nm. The carbon nanofibers demonstrate great potential as an anode material for Potassium-ion batteries with superior cycling stability and rate capability over previously reported carbon materials.

Herein, we report for the first time on the performance of two-dimensional transition metal carbonitrides, as novel promising electrode materials in K-ion batteries. Titanium carbonitride, Ti3CNTz, was investigated in detail using electrochemical galvanostatic cycling at various current densities. When cycled at 20 mA/g current density, Ti3CNTz exhibited a first cycle potassiation capacity of 710 mAh/g which dropped to 75 mAh/g after 100 cycles. At 10 mA/g, a reversible stable capacity of 90 mAh/g was achieved, while at 500 mA/g, a capacity of 31 mAh/g was obtained. XRD was used to study the potassiation mechanism and structural changes of Ti3CNTz. Ti3C2Tz and Nb2CTz also showed an ability to reversibly store K, but with lower performance as compared to Ti3CNTz.

The recycling of waste-tire rubber is of critical importance since the discarded tires pose serious environmental and health hazards to our society. Here, we report a new application for hard-carbon materials derived from waste-tires as anodes in potassium-ion batteries. The sustainable tire-derived carbons show good reversible potassium insertion at relatively high rates. Long-term stability tests exhibit capacities of 155 and 141 mAh g−1 for carbon pyrolyzed at 1100◦C and 1600◦C, respectively, after 200 cycles at current rate of C/2. This study provides an alternative solution for inexpensive and environmental benign potassium-ion battery anode materials. © The Author(s) 2017. Published by ECS.