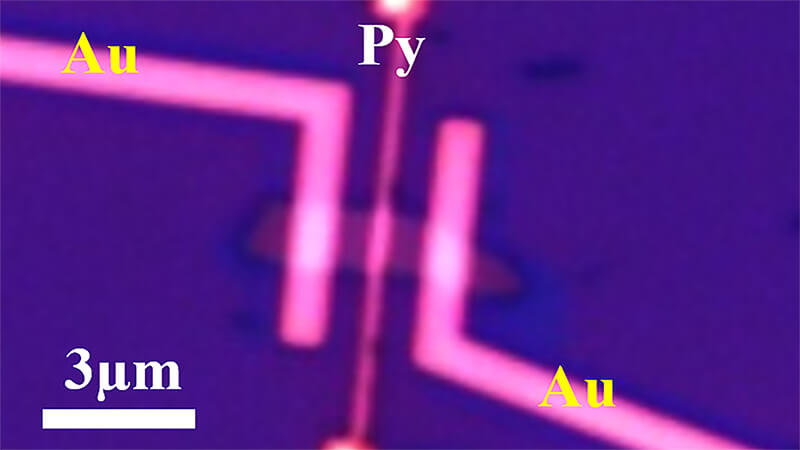 WEST LAFAYETTE, Ind. – Researchers have shown how to create a rechargeable “spin battery” made out of materials called topological insulators, a step toward building new spintronic devices and quantum computers.

Unlike ordinary materials that are either insulators or conductors, topological insulators are both at the same time - they are insulators inside but conduct electricity on the surface. The materials might be used for spintronic devices and quantum computers more powerful than today's technologies.

Electrons can be thought of as having two spin states: up or down, and a phenomenon known as superposition allows electrons to be in both states at the same time. Such a property could be harnessed to perform calculations using the laws of quantum mechanics, making for computers much faster than conventional computers at certain tasks.

The conducting electrons on the surface of topological insulators have a key property known as “spin momentum locking,” in which the direction of the motion of electrons determines the direction of its spin. This spin could be used to encode or carry information by using the down or up directions to represent 0 or 1 for spin-based information processing and computing, or spintronics.

“Because of the spin-momentum locking, you can make the spin of electrons line up or ‘locked’ in one direction if you pass a current through the topological insulator material, and this is a very interesting effect,” said Yong P. Chen, a Purdue University professor of physics and astronomy and electrical and computer engineering and director of the Purdue Quantum Center.

The new findings are detailed in a research paper appearing on April 14 in the journal Science Advances. The experiment was led by postdoctoral research associate Jifa Tian. 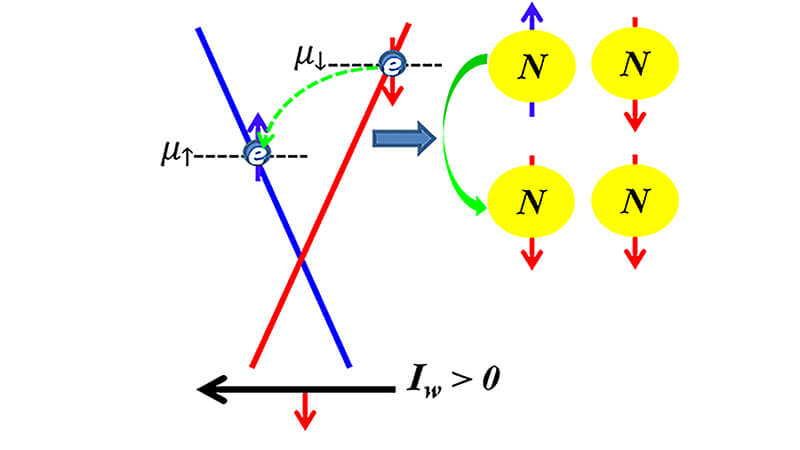 This “writing current” could be likened to recording the ones and zeroes in a computer’s memory.

“However, a better analog is that of a battery,” Chen said. “The writing current is like a charging current. It’s slow, just like charging your iPhone for an hour or two, and then it can output power for several days. That’s the similar idea. We charge up this spin battery using this writing current in half an hour or one hour and then the spins stay polarized for two days, like a rechargeable battery.”

The finding was a surprise.

“This was not predicted nor something we were looking for when we started the experiment,” he said. “It was an accidental discovery, thanks to Jifa’s patience and persistence, running and repeating the measurements many times, and effectively charging up the spin battery to output a measurable persistent spin polarization signal.”

The researchers are unsure what causes the effect. However, one theory is that the spin- polarized electrons might be transferring their polarization to the atomic nuclei in the material. This hypothesis as a possible explanation to the experiment was proposed by Supriyo Datta, Purdue’s Thomas Duncan Distinguished Professor of Electrical and Computer Engineering and the leader of the recently launched Purdue “spintronics preeminent team initiative.”

“In one meeting, Professor Datta made the critical suggestion that the persistent spin signal Jifa observed looked like a battery,” Chen said. “There were some analogous experiments done earlier on a nuclear spin powered battery, although they typically required much more challenging conditions such as high magnetic fields. Our observation so far is consistent with the effect also arising from the nuclear spins, even though we don’t have direct evidence.”

Nuclear spin has implications for development of quantum memory and quantum computing.

“And now we have an electrical way to achieve this, meaning it is potentially useful for quantum circuits because you can just pass current and you polarize nuclear spin,” Chen said. “Traditionally that has been very difficult to achieve. Our spin battery based on topological insulators works even at zero magnetic field, and moderately low temperatures such as tens of kelvins, which is very unusual.”

Seokmin Hong, a former Purdue doctoral student working with Datta who is now a software engineer at Intel Corp., said, “While an ordinary charged battery outputs a voltage that can be used to drive a charge current, a ‘spin battery’ outputs a ‘spin voltage,’ or more precisely a chemical potential difference between the spin up and spin down electrons, that can be used to drive a non-equilibrium spin current.”

The researchers used small flakes of a material called bismuth tellurium selenide. It is in the same class of materials as bismuth telluride, which is behind solid-state cooling technologies such as commercial thermoelectric refrigerators. However, unlike the commercial grade material that is a “doped” bulk semiconductor, the material used in the experiment was carefully produced to have ultra-high-purity and little doping in the bulk so the conduction is dominated by the spin-polarized electrons on the surface. It was synthesized by research scientist Ireneusz Miotkowski in the semiconductor bulk crystal lab managed by Chen in Purdue’s Department of Physics and Astronomy. The devices were fabricated by Tian in the Birck Nanotechnology Center in Purdue’s Discovery Park.

The paper was authored by Tian; Hong; and Miotkowski, Datta, and Chen.

Future research will include work to probe what causes the effect by directly probing the nuclear spin, and also to explore how this spin battery can be used in potential practical applications.

The research was funded by the U.S. Defense Advanced Research Projects Agency, the Birck Nanotechnology Center, and the Midwestern Institute for Nanoelectronics Discovery of Nanoelectronics Research Initiative, and National Science Foundation.

Topological insulators (TIs), with their helically spin-momentum-locked topological surface states (TSSs), are considered promising for spintronics applications. Several recent experiments in TIs have demonstrated a current induced electronic spin polarization that may be used for all-electrical spin generation and injection. Here, we report spin potentiometric measurements in TIs that have revealed a long-lived persistent electron spin polarization even at zero current. Unaffected by a small bias current and persisting for several days at low temperature, the spin polarization can be induced and reversed by a large “writing” current applied for an extended time. While the exact mechanism responsible for the observed long-lived persistent spin polarization remains to be better understood, we speculate on possible roles played by nuclear spins hyperfine coupled to TSS electrons and dynamically polarized by the spin-helical “writing current”. Such an electrically controlled persistent spin polarization with unprecedented long lifetime could enable a rechargeable spin battery and rewritable spin memory for potential applications in spintronics and quantum information.