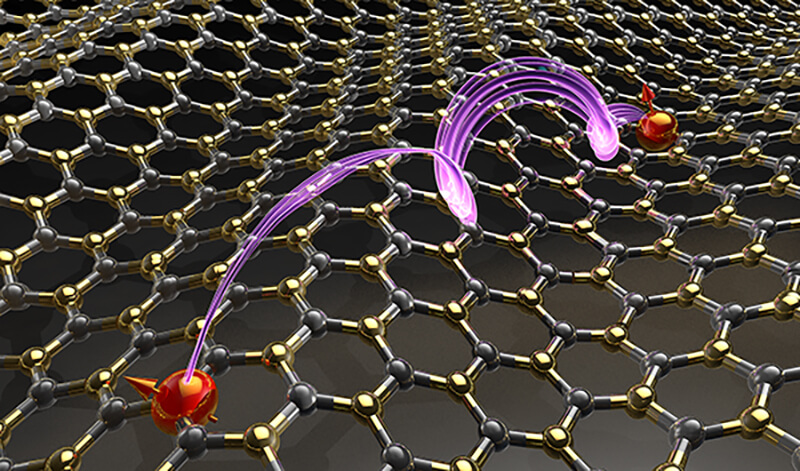 A new approach to control forces and interactions between atoms and molecules, such as those employed by geckos to climb vertical surfaces, could bring advances in new materials for developing quantum light sources. This graphic depicts “quantum emitters,” in red. (Purdue University image/Zubin Jacob)

WEST LAFAYETTE, Ind. - A new approach to control forces and interactions between atoms and molecules, such as those employed by geckos to climb vertical surfaces, could bring advances in new materials for developing quantum light sources.

“Closely spaced atoms and molecules in our environment are constantly interacting, attracting and repelling each other,” said Zubin Jacob, an assistant professor of electrical and computer engineering at Purdue University. “Such interactions ultimately enable a myriad of phenomena, such as the sticky pads on gecko feet, as well as photosynthesis.”

Typically, these interactions occur when atoms and molecules are between 1 to 10 nanometers apart, or roughly 1/10,000th the width of a human hair.

“These include Van der Waals forces that take place between atoms and molecules only when they are very close together. The fact that they always require extremely short separation distances makes them difficult to control. This poses a major obstacle to exploit them for practical applications,” he said.

For brief periods of time atoms are said to possess “fluctuating dipoles” because their positive and negative charges are momentarily separated. The dipoles from numerous atoms and molecules sometimes interact with each other, and these dipole-dipole interactions are the basis for Van der Waals and other forces between the closely-spaced atoms and molecules.

The researchers have demonstrated that these dipole-dipole interactions are fundamentally altered inside so-called two-dimensional materials, such as hexagonal boron nitride and black phosphorous, materials with a thickness consisting of only a few atomic layers. They also have shown that it’s possible to achieve the dipole-dipole interactions even when the atoms and molecules are relatively distant, with a separation approaching one micron, or 100 times farther apart then would normally be required. This greater distance represents the potential for the practical application of the phenomenon for optical sources.

Findings are detailed in a paper published earlier this year in the journal Nature Communications. The paper was authored by doctoral student Cristian L. Cortes and Jacob.

“Our main goal was trying to understand whether it’s possible to control and manipulate these sorts of interactions,” Cortes said. “What we found was that by carefully engineering material properties, it is possible to significantly alter the strength and spatial range of these interactions. We found that so-called hyperbolic materials actually allow very long-range interactions unlike any other conventional material.”

Dipole-dipole interactions also cause many fluorescent atoms and molecules to emit light in a synchronized manner. Ordinarily, fluorescent molecules emit light in random and spontaneous flashes. However, materials might be engineered to mediate interactions so that the emission becomes synchronized, flashing in unison, and increasing light output dramatically in a phenomenon called super-radiance.

“When they are interacting through these materials they can get locked in with each other like two pendulums synchronized perfectly,” Jacob said.

The materials are said to be “strongly interacting” due to the long-range dipole-dipole effect.

The “long-range” interactions could make possible new types of light sources that exploit super-radiance. Another challenging goal is to build quantum simulators using a network of interacting emitters to mimic “Coulomb interactions” or “spin interactions” between electrons in a material.

Although the Nature Communications paper focuses on theory, the researchers also suggested several experimental methods to validate the theory. They are performing an experiment using hyperbolic 2-D materials at the Birck Nanotechnology Center in Purdue’s Discovery Park.

Note to Journalists: An electronic copy of the research paper is available by contacting press@nature.com or Emil Venere, 765-494-4709, venere@purdue.edu.

Dipole–dipole interactions, which govern phenomena such as cooperative Lamb shifts, superradiant decay rates, Van der Waals forces and resonance energy transfer rates, are conventionally limited to the Coulombic near-ﬁeld. Here we reveal a class of real-photon and virtual-photon long-range quantum electrodynamic interactions that have a singularity in media with hyperbolic dispersion. The singularity in the dipole–dipole coupling, referred to as a super-Coulombic interaction, is a result of an effective interaction distance that goes to zero in the ideal limit irrespective of the physical distance. We investigate the entire landscape of atom–atom interactions in hyperbolic media conﬁrming the giant long-range enhancement. We also propose multiple experimental platforms to verify our predicted effect with phonon–polaritonic hexagonal boron nitride, plasmonic super-lattices and hyperbolic meta-surfaces as well. Our work paves the way for the control of cold atoms above hyperbolic meta-surfaces and the study of many-body physics with hyperbolic media.