Study: Listeria bacteria can hide inside tissue of romaine lettuce 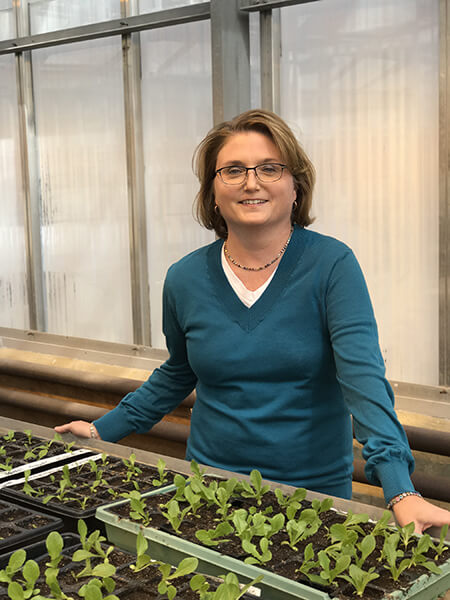 Amanda Deering, Purdue professor in the Department of Food Sciences, researches the ability of foodborne pathogens to grow and remain on or in plant tissue such as romaine lettuce. (Photo provided.) Download image

WEST LAFAYETTE, Ind. - A Purdue University study shows that the bacteria Listeria monocytogenes can live inside the tissue of romaine lettuce, suggesting that conventional post-harvest sanitization practices might not be sufficient to kill the potentially lethal pathogen.

Research led by Amanda Deering, clinical assistant professor in the Department of Food Science, showed that the bacteria could live within lettuce in every stage of the plant growth process, residing inside the plant tissue. L. monocytogenes can gain entry into the plant through cracked seed coats, small tears in root tissue during germination and damaged plant tissue. The researchers found that exposing lettuce to the bacteria could lead to infection of plant tissue in as little as 30 minutes.

“Knowing this can happen, we need to keep it on our radar as we continue to follow good agricultural practices,” Deering said.

When ingested, the bacteria can be deadly to those with vulnerable immune systems, including pregnant women, the elderly, infants, or those with HIV. L. monocytogenes can also cross the placental barrier in pregnant women, which can trigger a miscarriage.

“For immune-compromised consumers, it’s important to remember, that canned or cooked produce is better,” Deering said.

Symptoms of listeriosis may take as long as two months to appear, and by that time, most people don’t connect the illness to something they ate, Deering said.

After the 2016 recall of contaminated packaged salads, Deering, Haley Oliver, associate professor of food science, and Archana Shenoy, a graduate research assistant, began to investigate the persistence and internalization of L. monocytogenes in romaine lettuce, the fastest growing crop in the U.S. in terms of production, export and consumption.

Their research showed L. monocytogenes in romaine lettuce can persist up to 60 days or until the time of harvest. The bacteria could be found throughout the plant tissue, indicating yet another way foodborne pathogens can reach consumers, especially in ready-to-eat foods.

At the Purdue Center for Food Safety Engineering, researchers are working on detection technologies as they shift their focus to what can happen to the seed and seedlings before planting. They aim to find pre-harvest control strategies to prevent produce contamination, particularly as sanitizers can only treat produce externally.

“Continued education, training and research to minimize exposure of human foodborne pathogens in our soil, water, seeds, plants and produce have become my priority in research,” said Deering.

The paper is available here.

The study was conducted with support from research funds from the U.S. Department of Agriculture, Agricultural Research Service, under Project No.1935-42000-072.

Listeria monocytogenes has been implicated in a number of outbreaks involving fresh produce, including an outbreak in

2016 resulting from contaminated packaged salads. The persistence and internalization potential of L. monocytogenes in romaine

lettuce was evaluated, and the persistence of two L. monocytogenes strains was assessed on three romaine lettuce cultivars. Seeds

soft-top agar for up to 21 days. Average CFU per gram of L. monocytogenes on seeds and plants was calculated from five

in soft-top agar, while those grown in commercial potting mix (initial soil aerobic plate count of 4.0 3 104 CFU/g) had a final

plate count of 4.03101 CFU/g); this did not occur in sterile media. Although L. monocytogenes strain differences and presence

of a clay coating on seeds did not affect persistence, differences were observed in L. monocytogenes growth and survival among

cells were located in all major tissue types (pith followed by cortex, xylem, phloem, and epidermis). The presence of L.

monocytogenes in the plant vasculature suggests potential for transport throughout the plant into edible tissue.