Monster Martian volcano unlike anything on Earth, scientists say 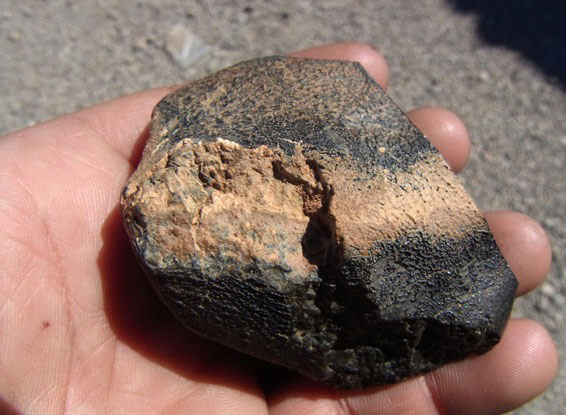 Martian meteorite "Northwest Africa 7635," discovered in Algeria in 2012, has allowed an international team of scientists to gain new insights into the geologic history of Mars. (Photo courtesy of Mohammed Hmani) Download image

WEST LAFAYETTE, Ind. — An unusual meteorite found in Algeria in 2012 has given scientists information about volcanic activity on Mars, and it's not like anything we've ever seen on Earth.

Analysis of the 6.9-ounce meteorite, labeled Northwest Africa (NWA) 7635 by an international team of scientists, has helped determine that sometime in its 4.5 billion-year history, Mars had a single volcano that erupted continuously for more than 2 billion years.

"We've never seen anything like that on Earth," says Marc Caffee, professor of physics and astronomy at Purdue University and a member of the research team.

The research was published this week in the journal Science Advances.

So far, more than 100 meteorites in collections around the world have been identified as Martian meteorites.

"Even though we've never had astronauts walk on Mars, we still have pieces of the Martian surface to study, thanks to these meteorites," Caffee says.

Most Martian meteorites are found either in Antarctica or North Africa.

"Between Antarctica and other deserts we add more than 1,000 meteorites per year, but only a few of those are interesting, including those originating from Mars and the moon," Caffee says. "The standard ones are sent to the Smithsonian, but the unusual ones are sent to NASA and the community of scientists is informed in case they want to request samples."

Mars' lower gravitational attraction, combined with its thinner atmosphere, makes it easier for fragments released during impacts to be propelled off the planet’s surface.

From there it's not a direct path to the deserts of Earth, however. The rock fragments orbit in space for hundreds of thousands - or millions - of years, until, for a few fragments, a close pass to a planet or something else in space perturbs their orbit. Over the next thousands of years, that perturbed orbit puts the fragment on a collision course with our planet.

Once the meteorites arrive on Earth they begin to degrade over tens of thousands of years, ultimately becoming unrecognizable as extraterrestrial rock unless they are found and recognized as the interplanetary space travelers that they are.

Of the 100 meteorites ever found, Caffee has analyzed approximately 30 in the Purdue Rare Isotope Measurement (PRIME) Laboratory. He's found that the meteorites tend to fall into age groups, indicating that each group was likely ejected from the surface of Mars by distinct events.

NWA 7635 is one of a group of 11 meteorites that Caffee's lab has determined were exposed to cosmic rays for 1.1 million years.

"What we interpret from that is that all 11 were knocked off Mars at the same time," Caffee says. "But this one was different than the others."

Although the other 10 meteorites in the group were all approximately 500 million years old -  meaning they were formed from cooling magma half a billion years ago on the surface of Mars -  NWA 7635 was found to be 2.4 billion years old.

"What this means is that for 2 billion years there's been sort of a steady plume of magma in one location on the surface of Mars," Caffee says. "We don't have anything like that on Earth, where something is that stable for 2 billion years at a specific location."

"We don't know at this point where this particular meteorite came from, whether it was Olympus Mons or some other location," Caffee says.

Martian volcanoes can grow to such enormous proportions because, unlike Earth, Mars doesn't have plate tectonics that constantly shuffle the surface. So a volcano, like the one that birthed NWA 7635, can plume for billions of years.

"These meteorites are allowing us to conduct geologic science on the surface of Mars, and we haven't even been there yet," Caffee says.

The timing and nature of igneous activity recorded at a single Mars ejection site can be determined from the iso- tope analyses of Martian meteorites. Northwest Africa (NWA) 7635 has an Sm-Nd crystallization age of 2.403 ± 0.140 billion years, and isotope data indicate that it is derived from an incompatible trace element–depleted man- tle source similar to that which produced a geochemically distinct group of 327- to 574-million-year-old “depleted” shergottites. Cosmogenic nuclide data demonstrate that NWA 7635 was ejected from Mars at 1.1 million years ago Q5 (Ma), as were at least 10 other depleted shergottites. The shared ejection age is consistent with a common ejection site for these individual meteorites. The spatial association of 327- to 2403-AMa depleted shergottites indicates >2 billion years of magmatism from a long-lived and geochemically distinct volcanic center near the ejection site.