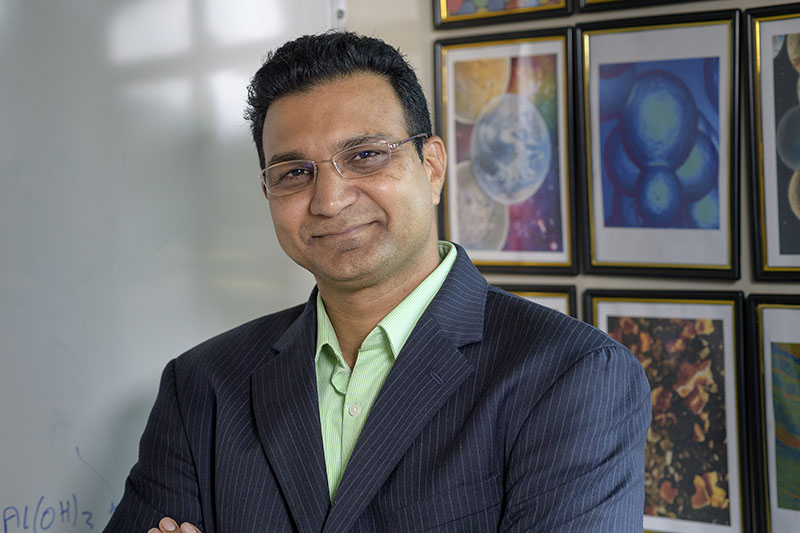 Vilas Pol, an associate professor in the School of Chemical Engineering and the School of Materials Engineering, is working to perfect a process that turns wheat flour into numerous tiny pores that capture carbon dioxide, representing a potential renewable technology to reduce the industrial emission of carbon dioxide into the atmosphere. (Purdue University image/John Underwood) Download image

WEST LAFAYETTE, Ind. – Researchers have shown how a process for the "carbonization" of wheat flour creates numerous tiny pores that capture carbon dioxide, representing a potential renewable technology to reduce the industrial emission of carbon dioxide into the atmosphere.

Purdue researchers developed a process that creates carbon compartments from wheat flour. Collaborating with researchers at Korea University in Seoul, South Korea, they studied carbon dioxide capture in these unique carbon compartments. The chemical compound potassium hydroxide was used to "activate" – or generate many small pores – in the wheat flour inside a furnace at 700 degrees Celsius.

The carbon dioxide is "adsorbed," or bound to the material's surface inside the micropores. 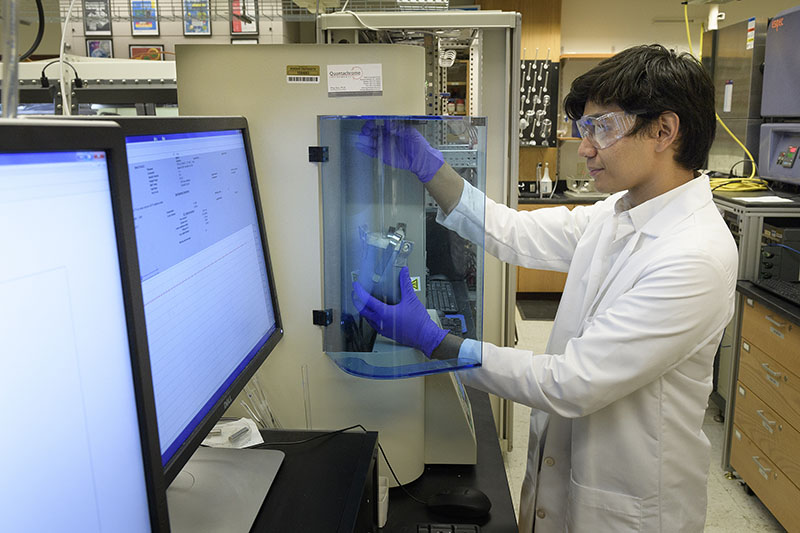 Purdue doctoral student Arthur Dysart operates a system that measures the adsorption of gas molecules on a solid carbon surface. He is working on a team developing materials that capture carbon dioxide, a strategy aimed at reducing the effects of climate change. (Purdue University image/John Underwood) Download image

The researchers varied the ratio of potassium hydroxide to carbon until finding a formulation that performed the best.

Findings showed the rate of carbon dioxide adsorption depends on the material's volume of micropores with a pore size less than .8 nanometers. The researchers also demonstrated that the material can be rapidly used over again to repeatedly capture carbon dioxide.

Future research will include work to adsorb larger quantities of carbon dioxide.

Note to Journalists: The research paper is available at http://www.nature.com/articles/srep34590 and from Emil Venere, 765-494-4709, venere@purdue.edu

Microporous carbon compartments (MCCs) were developed via controlled carbonization of wheat flour producing large cavities that allow CO2 gas molecules to access micropores and adsorb effectively. KOH activation of MCCs was conducted at 700 °C with varying mass ratios of KOH/C ranging from 1 to 5, and the effects of activation conditions on the prepared carbon materials in terms of the characteristics and behavior of CO2 adsorption, were investigated. Textural properties, such as specific surface area and total pore volume, linearly increased with the KOH/C ratio, attributed to the development of pores and enlargement of pores within carbon. The highest CO2 adsorption capacities of 5.70 mol kg−1 at 0 °C and 3.48 mol kg−1 at 25 °C were obtained for MCC activated with a KOH/C ratio of 3 (MCC-K3). In addition, CO2 adsorption uptake was significantly dependent on the volume of narrow micropores with a pore size of less than 0.8 nm rather than the volume of larger pores or surface area. MCC-K3 also exhibited excellent cyclic stability, facile regeneration, and rapid adsorption kinetics. As compared to the pseudofirst-order model, the pseudo-second-order kinetic model described the experimental adsorption data methodically.