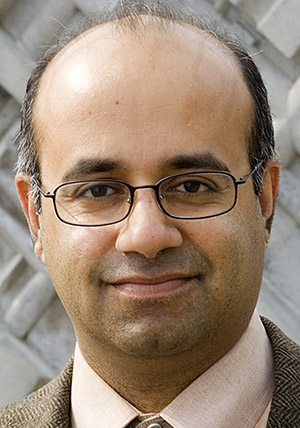 WEST LAFAYETTE, Ind. – A new system under development could allow people with no technical training to use their smartphones and tablets to easily create designs and fabricate them with a 3-D printer or a laser cutter.

Depth-sensing cameras in a phone might be used to scan objects, which can then be digitized, modified and incorporated into new creations. The system allows the use of standard smartphone gestures such as swipe, pinch and move to create the designs.

Research to develop the system, called MakerPad, is funded with a $1 million grant from the National Science Foundation, a Partnerships for Innovation: Building Innovation Capacity grant being announced this week.

The project is led by Karthik Ramani, the Donald W. Feddersen Professor of Mechanical Engineering at Purdue University.

"Currently, product design and manufacturing are the purview of enterprises and professionals such as engineers and artists," he said. "Everyone has ideas, but only a select few can bring them to reality. This is a tremendous waste of untapped human creative resources and economic potential to the society and world economy."

Collaborators in the project include the company ZeroUI Inc., which Ramani co-founded, the Imagination Station museum in Lafayette, Ind., and Purdue's Gifted Education Resource Institute.

Critical for the system to work are new cloud-powered algorithms that make possible an advanced human-computer interaction, allowing users to create and modify three-dimensional objects with a smartphone by harnessing depth-sensing cameras and other technologies. A YouTube video is available at https://www.youtube.com/watch?v=xzWj0tHpuYM

While the algorithms under development require a team of highly skilled engineers and computer scientists, they are designed to be used by people who have no technical background, said Ramani, working with co-principal investigators Ananth Iyer, the Susan Bulkeley Butler Chair of Operations Management and a professor of management; and Sanjay Rao, an associate professor of electrical and computer engineering.

"This will eventually become a service for anyone to use," said Ramani, director of Purdue's C Design Lab. "Say I want a lampshade, or I want a necklace, or I want some accessory for my car or bike. You will be able to create these with your phone and emerging augmented and virtual reality tools that enable anybody to become a maker."

Several patents related to MakerPad are pending through the Purdue Research Foundation's Office of Technology Commercialization.

The NSF this week announced 13 new (PFI:BIC) projects for smart, human-centered service systems. The news release is available at http://www.nsf.gov/news/news_summ.jsp?cntn_id=189628&org=IIP&from=news

Note to Journalists: A news release from the National Science Foundation is available at http://www.nsf.gov/news/news_summ.jsp?cntn_id=189628&org=IIP&from=news. A YouTube video is available at