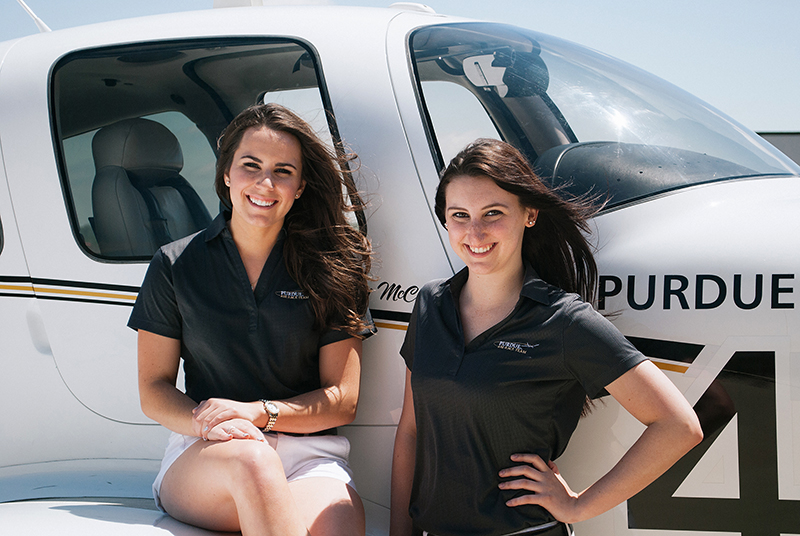 Pilot Molly Van Scoy, left, and co-pilot Mary McCarty pose next to the Purdue University Cirrus SR20 plane they will fly in the upcoming Air Race Classic, a transcontinental airplane race. The Purdue team will cover 12 states and 2,720 miles during the race, which begins in Prescott, Arizona, and ends in Daytona Beach, Florida. (Purdue University photo/Chris Konecnik) Download image

WEST LAFAYETTE, Ind. —Two Aviation and Transportation Technology students from Purdue Polytechnic Institute are taking to the skies for a 2,000-mile race across the United States.

Pilot Molly Van Scoy and co-pilot Mary McCarty are this year’s Purdue University entrants in the annual Air Race Classic. This is the 40th year for the cross-country airplane race.

It’s an exciting opportunity for the duo, who departed Purdue University Airport for the starting point in Prescott, Arizona, on Wednesday (June 15). The race begins on Tuesday (June 21).

“We always hope to place well, but this is about the experience and learning how to work with each other,” said Van Scoy, a senior in aviation management major from Shavertown, Pennsylvania.

The race also gives Van Scoy the chance to fly for the first time in the southwest United States, which brings higher terrain and temperatures into the mix for pilots.

“It makes you think a little harder,” she said.

Van Scoy was co-pilot for last year’s entry and part of the ground crew in 2014.

McCarty, a Wilmington, Ohio resident, is entering her junior year majoring in professional flight. She previously was part of the ground crew.

She said the transcontinental race is a benefit to collegiate pilots.

“It makes huge difference with all the different types of flying,” she said.

Pilots in the Air Race Classic will travel 2,719 miles this year. There are eight checkpoints before they reach the finish line on June 24 in Daytona Beach, Fla. The event is not your standard race. Each plane receives a unique handicap prior to the race. The team that beats its handicap by the largest margin wins.

At each stop, teams do a flyby over a timing line and timers on the ground and electronic trackers record their elapsed time between stops. Scorers calculate each team's times at the end of the race and determine the winners.

For this year’s race, the team is flying a Cirrus SR20 emblazoned with a black and gold P on the rear stabilizer.

Purdue has had entries in the race for 22 years. A Purdue team took third place in 2010 while another team won in 1996.

Both members of this year’s team thank family for their interest in flying and aviation. McCarty’s grandfather, who was a pilot in Vietnam, renewed his pilot’s license when she got hers. Van Scoy caught the bug for flying, as she puts it, because of her mother’s career as a pilot and her family managing an airport.

Purdue’s entry into the Air Race Class is made up of two parts, starting with the pilot and co-pilot.

The ground crew is working to give racers the best and fastest route for their journey. Crew members analyze weather including winds and front locations as well as forecasts and hazardous weather. The crew also calculates fuel burn and helps with decisions on whether to try flying the next leg of the race or wait for better weather.

About the Air Race Classic

The first race took place in 1929, originally called the Women’s Air Derby and included a field of 20 women pilots that included Amelia Earhart, who would later join the faculty at Purdue University. That race flew from Santa Monica, California, to the Cleveland Air Races in Ohio. The All Women's Transcontinental Air Race (Powder Puff Derby) was formed in 1948 and ran until 1977. The ARC ran its first race in 1977 with a 2,400-mile race from Santa Rosa, California, to Toledo, Ohio, and is the longest running air race in the USA.

Note to Journalists: B-roll video of take off preparations is available at https://drive.google.com/open?id=0BxdPFMVWz-l2WHRjdWhDVWJDaTQ

Follow Van Scoy and McCarty posting about the race