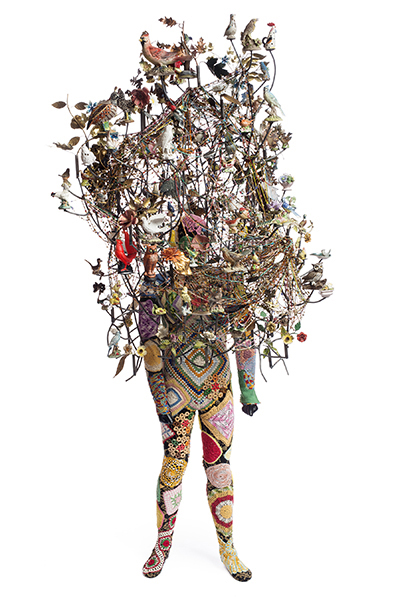 Two soundsuits by artist Nick Cave are now on permanent display in the lobby of Yue-Kong Pao Hall, home of the Patti and Rusty Rueff School of Visual and Performing Arts. The soundsuits are part of the Lonsford Collection, an ongoing series of art pieces displayed on campus. The collection is named for Florence H. Lonsford, a former Purdue graduate and artist. (Photo contributed) Download image

WEST LAFAYETTE, Ind. — Two “Soundsuits” by renowned visual artist Nick Cave are on permanent display in the lobby of Yue-Kong Pao Hall, home of the Patti and Rusty Rueff School of Visual and Performing Arts.

"Nick Cave's soundsuits are wearable sculptures constructed from repurposed materials," said Liz Erlewine, gallery coordinator for the Rueff Galleries at Purdue. "Though they are made from ordinary thrift-store finds, the larger-than-life figures are extraordinary; beautiful, powerful, and playfully strange."

A combination of fashion, sculpture, and dance, Cave created his first soundsuit in 1992 after hearing about the Rodney King beating in Los Angeles and the resulting civic unrest. Soundsuits function as a symbolic coat of armor, hiding the performer and creating anonymity, while also fostering an otherworldly moment of discovery for both performer and viewer.

Cave, chair of the Fashion Department at the School of the Art Institute of Chicago, has shown his soundsuits nationally and internationally. His work is also included in public collections including the Brooklyn Museum; the Detroit Institute of Arts; the Museum of Modern Art, New York; the Museum of Fine Arts, Boston; the Smithsonian Institution; and the Indianapolis Museum of Art.

It was recently announced that Nick Cave will be a featured artist in the next season of PBS' Peabody-award-winning series Art21 Art in the 21st Century.

The Purdue soundsuits were acquired as part of Spring Fest 2015. The 2015 celebration included performances by Purdue Contemporary Dance Company student dancers as they wore a collection of the soundsuits.

The new display cases give the pieces a permanent home on campus. The acquisitions are part of Purdue's Lonsford Collection, named in honor of a gift from the estate of Purdue alumna and artist Florence H. Lonsford.