Following a demanding audition process, the Purdue “All-American” Marching Band announced that Valerie Minnick and Geoffrey Ladue will serve as the Drum Majors for the 2022-23 season. The two will lead the Band to carry on its tradition of excellence through athletic events and thrilling performances.

Valerie is a sophomore from Brighton, MI majoring in Chemistry. She performed in the Big Ten Flags and piccolo sections of the “All-American” Marching Band and currently plays flute and piccolo in the Campus Band. Valerie is also a member of the department’s Library Team, plays in the Boiler Box Band and is MC for Kappa Kappa Psi – the National Honorary Band service fraternity.

Geoffrey is a sophomore from Wildwood, MO majoring in Industrial Engineering with a minor in Statistics. He plays trombone in the “All-American” Marching Band and the Purdue Wind Ensemble, and has performed as a pianist with the Wind Ensemble as well. He serves as a Student Life Ambassador for Purdue Bands & Orchestras, Student Leader in the “All-American” Marching Band, and is also an active brother of Kappa Kappa Psi.

As the AAMB celebrates this appointment, the Band also wishes their outgoing Drum Majors, Lorin Nugent and Jonathan Heidegger, all the best as they begin very successful careers. Stay tuned at www.purdue.edu/bands for further updates on the Fall 2022 season for the Purdue “All-American” Marching Band. 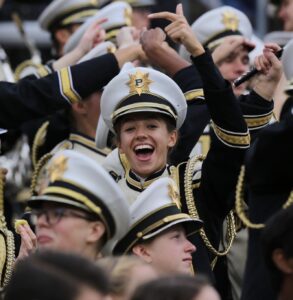 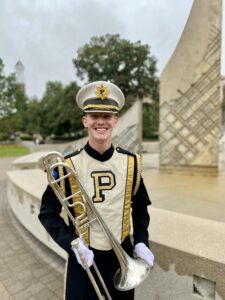