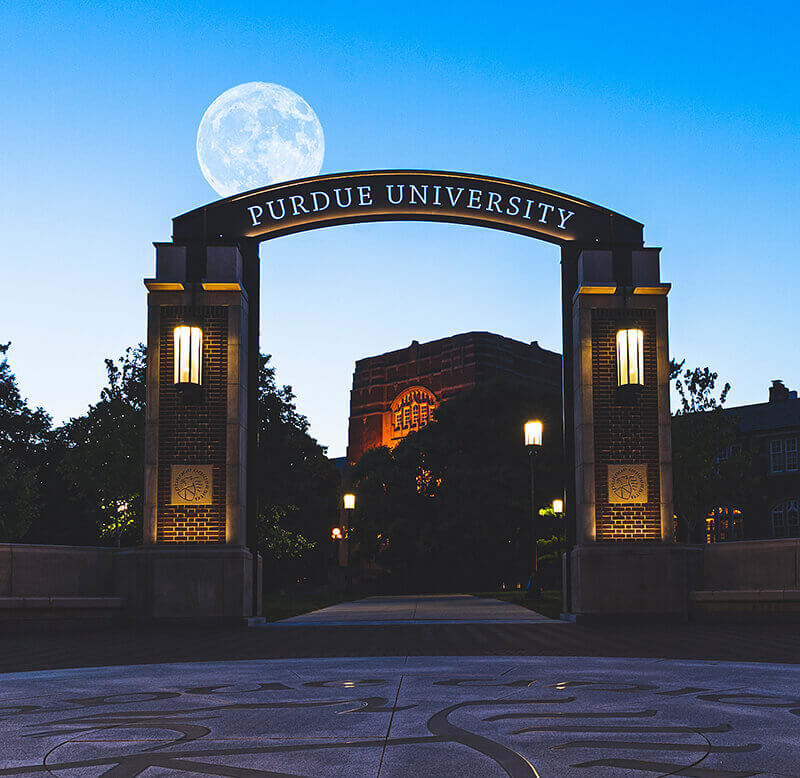 The recent harvest moon shines over the Cradle of Astronauts. Purdue has announced activities leading up to Homecoming 2019 as the university celebrates the conclusion of its 150th anniversary. The Take Giant Leaps campaign will conclude on Oct. 12 with an astronaut reunion celebrating 13 of the university’s alumni who have taken their own giant leaps. (Purdue University photo/Rebecca Wilcox)


WEST LAFAYETTE, Ind. — Purdue’s 150th anniversary and its Giant Leaps campaign will conclude Saturday (Oct. 12) with an astronaut reunion celebrating 13 of the university’s alumni who have gone into space.

More information about the astronaut reunion and who is attending is available online.

The campaign launched during Homecoming 2018. Since then, more than 60 Giant Leaps Series and Ideas Festival events have taken place, drawing a total attendance of more than 45,000 people as well as an additional 475,000 people who watched select events via livestream. A video of speaker highlights is available here. The Giant Leaps Series and Ideas Festival events are focused on asking the big questions and working toward solutions for four themes: space exploration, artificial intelligence, health and longevity and sustainable planet and economy, often highlighted by Purdue research. A photo gallery is available here.

* The football game will have many 150th anniversary and Giant Leaps celebrations including a space-themed halftime performance by the “All-American” Marching Band. It can be watched via Facebook Live. The Boilermaker football team will wear a custom moon-inspired helmet and astronaut-themed patch in honor of the 50th anniversary of NASA’s Apollo 11 lunar mission.

* Read about Purdue’s promise to Indiana and the world.

* Purdue 150th anniversary and Cradle of Astronauts themed merchandise is available at the Purdue Team Store in the Purdue Memorial Union and at Ross-Ade Stadium leading up to Homecoming. The merchandise also will be available online at Purdueteamstore.com.

* The NASA Journey to Tomorrow Traveling Exhibit will be on campus Friday (Oct. 11) and Saturday (Oct. 12). Here is a video preview, and more information is in the calendar below.

*  One of the fastest U.S. street-legal cars, a Viperia Berus, will participate in Thursday’s (Oct. 10) Homecoming parade (parade information below) and be on display at the edge of Homecoming Tent Row at Stadium Avenue and University Street from 9:30-11:30 a.m. on Saturday (Oct. 12). This Keating Supercar, which will sport Purdue decals, is a coupe that can reach speeds of more than 230 mph. The Berus, capable of going from 0 to 60 mph in 2.4 seconds, is the fifth generation of Keating supercar. The Berus, powered by the legendary Chevy LS series V8, is the first Keating Supercar to be sold in the United States. Keating Supercars LLC will make cars at Purdue as part of a collaboration that will include the Purdue Motorsports program.

Homecoming activities will take place Wednesday to Saturday (Oct. 9-12), culminating with Purdue’s football game against the University of Maryland. Here is a list of activities:

Condoleezza Rice — Giant Leaps Series: Rice, the former U.S. secretary of state, will speak as part of Purdue’s Giant Leaps Series as part of the 150th anniversary celebration. She was the 66th U.S. secretary of state, serving under President George W. Bush. The event is at 6:30 p.m. in Elliott Hall of Music. Anyone who claimed a ticket must pick it up in advance with a valid photo ID. More information available online. The event is sold out, but overflow seating to watch via livestream is available in Stewart Center’s Loeb Playhouse. More information available online.

Alan Stern — “What If We Return to Pluto?”: Stern is a planetary scientist, space program executive, aerospace consultant and author. He has written three books, “The U.S. Space Program After Challenger,” “Pluto and Charon: Ice Worlds on the Ragged Edge of the Solar System,” and “Chasing New Horizons.” The event is at 6:30 p.m. in Stewart Center’s Loeb Playhouse. The event is free but a ticket is required. Related news release.

Homecoming parade: The public’s first glimpse of the astronauts will be during the Oct. 10 Homecoming parade as some ride the Boilermaker Special. They will join the parade grand marshal Steele Johnson, a Purdue alumnus, Olympic silver medalist, and NCAA champion in men’s diving.

The Homecoming parade will take place at 8 p.m. The parade route will begin at Memorial Mall at the intersection of State Street and Oval Drive, will continue onto MacArthur Drive to Third Street, and will end on Martin Jischke Drive just before Stadium Avenue. More information about the astronaut’s public meet and greet, as well as football game appearance, are noted below.

Immediately following the Homecoming Parade there will be a pep rally on the lawn at Krach Leadership Center, and Purdue football coach Jeff Brohm is scheduled to appear at 9:15 p.m.

EDITOR'S NOTE: The following event has been postponed due to weather concerns.
State Street dedication and Discovery Park District launch:The dedication and launch, which is open to the public, will take place from 3-5 p.m. in Squirrel Park at the corner of State Street and Airport Road. This event will feature activities to promote Purdue’s new State Street and Discovery Park District. The event also will highlight research and development being conducted in Discovery Park. Provenance, a new multi-family and single-family neighborhood development, and Crave Food Hall, a 15,000-square-foot food court in the three-building Aspire apartment complex, and the Convergence Center for Innovation and Collaboration, will be showcased.

Sweden-based Saab Global Defense and Security Co. is opening a $37 million facility in the Purdue University-affiliated Discovery Park District in West Lafayette. Saab will conduct its contribution to the production of the U.S. Air Force’s T-X pilot training program and other aerospace projects at the site.

Giant Leaps free concert – Big Gigantic with MadeinTYO: The free concert will be at 7:30 p.m. Oct. 11 on Purdue’s Slayter Hill. Elliott Hall of Music will serve as the rain location. The Big Gigantic duo established themselves as pioneers of live electronic music with the band's inception in 2008. Big Gigantic mixes musically mature melodies with addictive beats and samples that are familiar to a Kanye West or LCD Soundsystem single, and crosses all styles of music, from jazz to hip-hop, and from funk to dubstep. MadeInTYO is pronounced Made In Tokyo. More information is available online.

NASA’s Journey to Tomorrow Traveling Exhibit: The Journey to Tomorrow exhibit trailer is a 53-foot exhibit offering an interactive learning environment that highlights NASA’s air and space research and technology. Here is a video that highlights the exhibit. The exhibit will be open 9 a.m. to 5 p.m. on Friday (Oct. 11) and 9 a.m. to noon on Saturday (Oct. 12) on the south side of Lambert Fieldhouse. Visitors will have the opportunity to interact with touchscreen monitors and learn about how NASA improves aviation, lands rovers on Mars and keeps astronauts healthy. The Journey to Tomorrow also includes hands-on displays featuring a glovebox and dynamic planet simulator; models of NASA X-Planes; the Orion multipurpose crew vehicle; and NASA’s new rocket, the Space Launch System. It also features an authentic moon rock brought to Earth by crew from the Apollo 17 lunar landing mission.

Astronaut Reunion: The public is welcome to attend a meet and greet with the astronauts from 9:30-10:30 a.m. at Homecoming Tent Row, located near Neil Armstrong Hall of Engineering. Pre-signed headshots of the astronauts will be distributed. The astronauts also will be recognized on the field during halftime.

Boilermaker Crossing fan fest: Join the pre-game fan fest from 9-11:30 a.m. in the Sally and Bob Weist Plaza between Mackey Arena and Holloway Gymnasium. Inflatables, a beer garden, giveaways, a live radio show and other family-friendly activities will all be available. The event is free and open to fans of all ages.

Homecoming celebration: From 9:30-11:30 a.m. on Stadium Mall, there will be various Homecoming activities, including family-friendly events and booths from each of the colleges. The Boiler Beer Garden returns this year for fans to stop and grab a drink on their way to Ross-Ade Stadium. Purdue astronauts will be in attendance from 9:30-10:30 a.m. near the Neil Armstrong statue.

Thrill on the Hill: The Purdue “All-American” Marching Band will perform a concert at 10:30 a.m. Saturday (Oct. 12) on Slayter Hill.

Purdue football vs. Maryland: The Purdue Boilermakers take on the Maryland Terrapins at noon at Ross-Ade Stadium. There will be a Saab flyover, an astronaut and Ever True campaign themed-halftime show, and the announcement of Homecoming royalty at the game. The game is sponsored by Purdue’s College of Pharmacy.