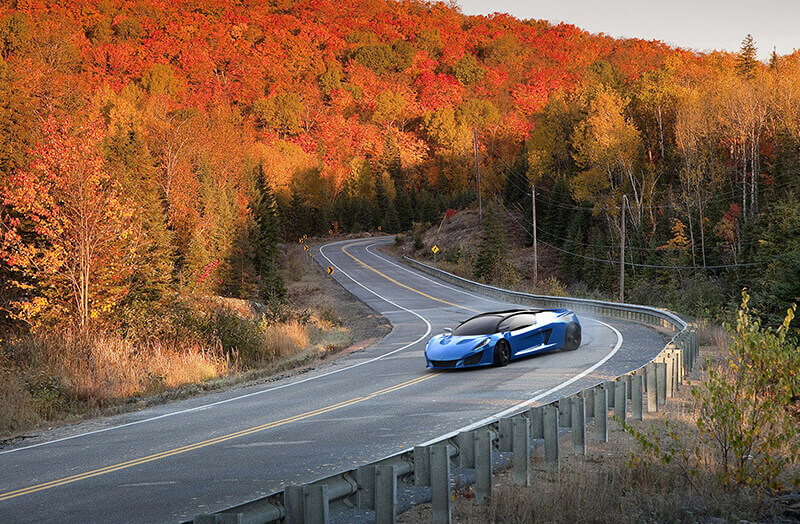 Keating Supercars LLC plans to build the Viperia Berus, which will be the fastest street-legal car in America, at Purdue’s Discovery Park District. The car can reach speeds of more than 230 mph. Purdue students will play a major role in their production. (Image provided)

WEST LAFAYETTE, Ind. –  Move over IndyCar racers, you could soon be passed by the fastest U.S. street-legal cars, which Keating Supercars LLC will make at Purdue’s Discovery Park District as part of a collaboration that will include Purdue’s Motorsports STEM program and a similar automotive STEM program emerging in Great Britain.

Tony Keating, CEO of Keating Supercars, announced Tuesday (April 24) that his company will build the Viperia Berus, a coupe that can reach speeds of more than 230 mph, which are the speeds IndyCar racers hit during qualifying. Purdue students will play a major role in their production.

Keating plans to open a showroom in the Purdue Discovery Park District on the west side of the Purdue University campus with a ribbon-cutting ceremony planned for the last week of May. Cars are expected to be available for sale in November and a local manufacturing location is being established.

“I take pride in this collaborative effort with Purdue University and I’m excited to be able to take advantage of the vibrant Discovery Park District,” Keating said. “As an organization, Keating Supercars have the courage and the capability to design and build cars for the American sportscar market, where high performance is a must.”

Keating Supercars plans to ramp up production to about 100 cars a year at Purdue that will sell for between $180,000 and $250,000. For each car sold, Keating Supercars will donate $30,000 to support automotive STEM-based education.

“We are delighted that Keating Supercars have chosen Purdue and the Discovery Park District to be its U.S. launch pad,” said Dan Hasler, the chief entrepreneurial officers for the Purdue Research Foundation.

As part of the project, Purdue will work with the University of Bolton  in Britain to establish a STEM program similar to a multi-college effort led by James M. Caruthers, the Gerald and Sarah Skidmore Professor in Chemical Engineering at Purdue. That program uses IndyCar racing to engage middle and high school students in STEM disciplines.

“We’ll use students’ love for cars and racing to engage young people in STEM education that prepares them for careers in the manufacturing industries,” Caruthers said.

Keating said the educational component of the collaboration will add much to students’ academic experiences.

“Our experience and tacit knowledge in working with the University of Bolton and helping develop the National Centre for Motorsport Engineering illustrates how we value education, especially how STEM provides well-paying and sustainable jobs,” Keating said.

Keating started building supercars in 2006. Since then he has engineered a new supercar every two years. The Berus, capable of going from 0 to 60 mph in 2.4 seconds, is the fifth generation of Keating supercar.  The Berus, powered by the legendary Chevy LS series V8, is the first Keating Supercar to be sold in the United States.

Keating plans to sell the cars made at Purdue in the United States and Asia, while cars for sale in Europe will be built in Bolton. A link to video of Keating Supercars is available at https://youtu.be/aLqVe7NDCFM.