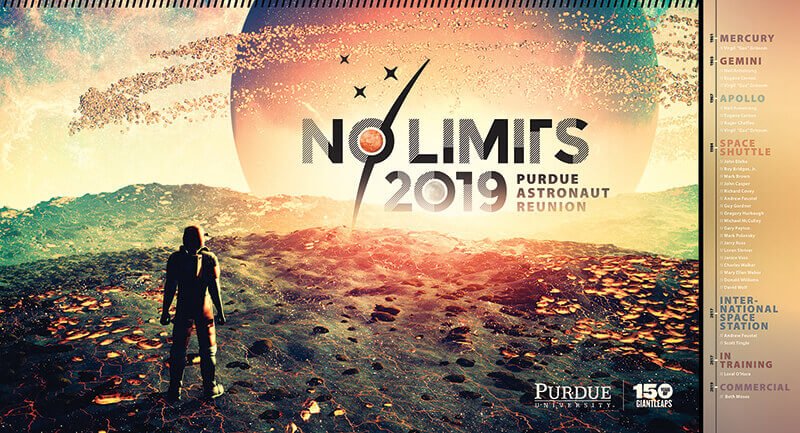 This commemorative poster – while supplies last – will be available during the meet and greet with the astronauts 9:30-10:30 a.m. on Oct. 12 at Homecoming Tent Row, located near the Neil Armstrong Hall of Engineering. Pre-signed headshots of the astronauts also will be distributed.

Note: There will now be 13 astronauts as Gregory J. Harbaugh is no longer able to attend.

The 150th anniversary highlights Purdue’s history of giant leaps – including the giant one made by Purdue alumnus Neil Armstrong on the moon – while focusing on what giant leaps Purdue can take to address the world’s problems. 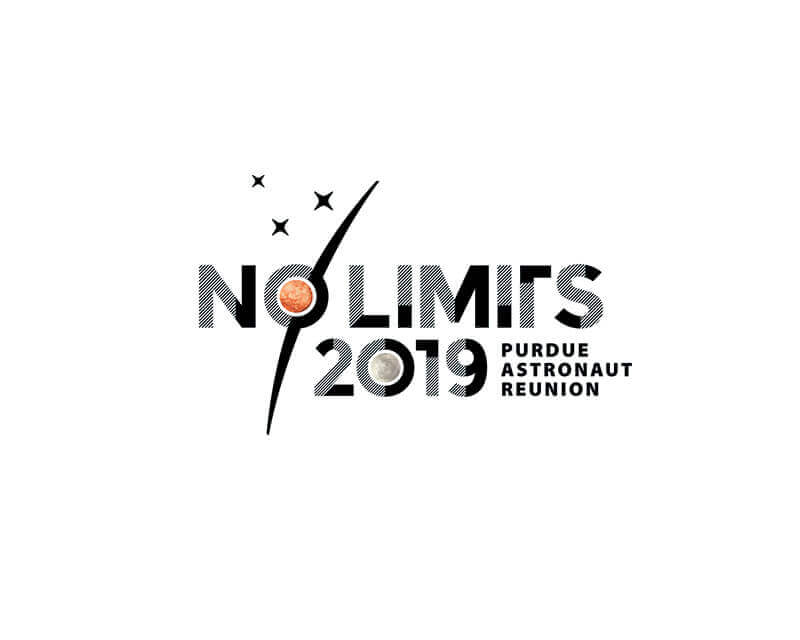 Purdue upholds the Cradle of Astronauts tradition, graduating 25 astronauts, including the first and most recent people to walk on the moon. Download image

Purdue upholds the Cradle of Astronauts tradition, graduating 25 astronauts, including the first and most recent people to walk on the moon. Twelve astronauts who have flown with NASA and one commercial astronaut are expected at the reunion on Oct. 10-12 where they will speak to Purdue classes, visit local schools and tour campus.

The public is welcome to attend a meet and greet with the astronauts 9:30-10:30 a.m. on Oct. 12 at Homecoming Tent Row, located near the Neil Armstrong Hall of Engineering. Pre-signed headshots of the astronauts will be distributed, as well as commemorative posters and buttons, while supplies last.

The astronauts also will be recognized on the field during halftime of the Boilermakers’ game against the University of Maryland.

Space fans can also visit NASA’s Journey to Tomorrow Traveling Exhibit on Oct. 11 from 9 a.m. to 5 p.m. and Oct. 12 from 9 a.m. to noon on the south side of Lambert Fieldhouse. The Journey to Tomorrow exhibit trailer is a 53-foot exhibition offering an interactive learning environment that highlights NASA’s air and space research and technology. Visitors will have the opportunity to interact with touchscreen monitors and to learn about how NASA improves aviation, lands rovers on Mars and keeps astronauts healthy. The Journey to Tomorrow also includes hands-on displays featuring a glovebox and dynamic planet simulator; models of NASA X-Planes, the Orion multipurpose crew vehicle, and NASA’s new rocket, the Space Launch System; and features an authentic moon rock brought to Earth by crew from the Apollo 17 lunar landing mission.

Bios of astronauts in attendance for reunion:

* Roy D. Bridges Jr. graduated from the U.S. Air Force Academy with a bachelor’s degree in engineering science in 1965 and earned a Master of Science in Astronautics from Purdue in 1966. He was selected for astronaut training in 1980 and piloted the Spacelab-2 mission, STS-51F, in 1985. Bridges is a retired U.S. Air Force major general.

* Mark N. Brown received a Bachelor of Science in Aeronautical and Astronautical Engineering from Purdue in 1973 and a master’s in astronautical engineering from the Air Force Institute of Technology in 1980. Brown became an astronaut in 1985 and served as mission specialist on STS-28 and STS-48 in 1989 and 1991, respectively. He is a retired colonel of the U.S. Air Force.

* Andrew J. Feustel earned an associate degree from Oakland Community College in Michigan in 1986, a bachelor’s degree in solid earth sciences from Purdue in 1989, a master’s in geophysics in 1991 from Purdue and a doctorate in geological sciences from Queen’s University in Kingston, Ontario, in 1995. Feustel was selected as an astronaut in 2000, serving on STS-125 in 2009 and STS-134 in 2011, and was commander on the International Space Station for Expedition 55/56 in 2018. He has spent 226 days in space during his three flights and is the third all-time astronaut for time spent on spacewalks with a total of 61 hours and 48 minutes over nine spacewalks.

* Michael J. McCulley received his bachelor’s and master’s degrees in metallurgical engineering from Purdue in 1970. In 1985, he completed astronaut training and was assigned to pilot the STS-34 in 1989. McCulley is a retired Navy captain, has flown over 50 aircraft types, logged over 5,000 flying hours and has 400 carrier landings from six aircraft carriers.

* Beth S. Moses earned her bachelor’s and master’s degrees in aeronautics and astronautics from Purdue in 1992 and 1994, respectively. In February, Moses became the first female commercial astronaut on Virgin Galactic’s spaceplane, the VSS Unity VF-01. During her test flight, she became the first person ever to unbuckle and float during a suborbital spaceflight.

* Loral O’Hara earned a Bachelor of Science degree in Aerospace Engineering at the University of Kansas in 2005 and a master’s in aeronautics and astronautics from Purdue in 2009. O’Hara was selected into NASA’s 2017 astronaut candidate class while working at the Woods Hole Oceanographic Institution researching subsea systems development. She is set to complete her two-year training in 2019 and will be assigned technical duties in the Astronaut Office until she receives a flight assignment.

* Gary E. Payton graduated from the U.S. Air Force Academy in 1971 with a bachelor’s degree in astronautical engineering. In 1972, he earned a master’s in astronautical and aeronautical engineering from Purdue. Payton flew on STS-51C in 1985, traveling over 1.2 million miles in 48 Earth orbits. Payton graduated from and instructed for the pilot training program at Craig Air Force Base and was a major in the U.S. Air Force.

* Mark L. Polansky received both a bachelor’s in aeronautical and astronautical engineering and master’s in aeronautics and astronautics from Purdue in 1978. He served as pilot for the STS-98 in 2001 and mission commander for STS-116 in 2006 and STS-127 in 2009. His three missions all serviced the International Space Station and ,in total, he logged more than 993 hours in space.

* Loren J. Shriver earned a bachelor’s degree in aeronautical engineering for the U.S. Air Force Academy in 1967 and a master’s in astronautical engineering from Purdue in 1968. He was selected as an astronaut by NASA in 1978 and participated in three missions, STS-51C in 1985 as a pilot, STS-31 in 1990 as commander and STS-46 in 1992 as commander. Shriver is a retired Air Force colonel, logging more than 6,200 hours in jet aircraft and holds commercial pilot and private glider ratings.

* Scott D. Tingle is a 1987 graduate of Southeastern Massachusetts University with a bachelor’s degree in mechanical engineering. He earned a master’s degree in mechanical engineering in 1988 from Purdue. Tingle was selected into NASA’s 20th astronaut class in 2009 and was flight engineer and United States operational segment lead for Expedition 54/55 from December 2017 to June 2018, totaling 168 days in space. He is a naval captain, accumulating more than 4,500 flight hours on 51 types of aircraft and 54 combat missions.

* Charles D. Walker received a Bachelor of Science degree in Aeronautical and Astronautical Engineering in 1971 at Purdue. Walker was the first industrial payload specialist confirmed by NASA in 1983 and helped train NASA astronaut crews on STS-4, STS-6, STS-7 and STS-8 shuttle flights during 1982 and 1983 on his patented continuous-flow electrophoresis devices. Walker was a crew member on space shuttle missions 41-D in 1984, 51-D in 1985 and 61-B in 1985 to review the CFES equipment, traveling 8.2 million miles over the course of the missions.

* Mary Ellen Weber graduated with a bachelor’s degree in chemical engineering from Purdue in 1984, a doctorate in physical chemistry from the University of California, Berkeley in 1988 and a Master of Business Administration degree from Southern Methodist University in 2002. She was selected into the 14th group of astronauts in 1992, tasked with working in technology commercialization. Weber is a veteran of two spaceflights, STS-70 in 1995 and STS-101 in 2000, logging more than 450 hours in space.