Ben-Gurion University of the Negev (BGU) researchers announced on Monday that they have developed the first experimental robot drone that flies like a typical quadcopter, drives on tough terrain and squeezes into tight spaces using the same motors. In a related development, Purdue University researchers said on Monday that they have engineered flying robots that behave like hummingbirds, trained by machine learning algorithms based on various techniques the bird uses naturally every day. This means that after learning from a simulation, the robot “knows" how to move around on its own like a hummingbird would, such as discerning when to perform an escape maneuver.

Children who enjoy sweetened soft drinks consume more total calories and sugar compared with their water- and milk-drinking peers, according to a new study, “Consumption of Low-calorie Sweetened Beverages is Associated with Higher Total Energy and Sugar Intake Among Children, NHANES 2011-2016,” published Thursday (May 2) in the journal Pediatric Obesity. Susan E. Swithers, a professor in Purdue University’s Department of Psychological Sciences, is a co-author of the study, which sought to understand the effects of consuming beverages that contain artificial sweeteners on children’s eating and drinking patterns.

Chhole, Saambar ‘Unaffordable’ Once, Not Anymore: What Changed?

Storage is an issue. IIPR says radiation with low doses of gamma rays can prevent the infestation of bruchids (called ghun in Hindi). Dr Pooran Gaur of ICRISAT says that triple layer bags developed by Purdue University do the same, by depriving insects of oxygen. These bags are inexpensive, and don’t need insecticides. Odisha has distributed 60,000 of them to groundnut farmers this year. ICRISAT recommends them also for pulses.

Chhole, Saambar ‘Unaffordable’ Once, Not Anymore: What Changed?

A video on social media shows a high-ranking U.S. legislator declaring his support for an overwhelming tax increase. You react accordingly because the video looks like him and sounds like him, so certainly it has be him. “It’s possible that people are going to use fake videos to make fake news and insert these into a political election,” said Delp, the Charles William Harrison Distinguished Professor of Electrical and Computer Engineering. “There’s been some evidence of that in other elections throughout the world already.

Orbital debris from spacecraft, the defunct satellites and fragments of spent rockets left suspended in Earth’s atmosphere, are slowly making their way back to Earth. Objects usually return after a few years, but debris trapped in higher orbits can remain for more than a century. Purdue University’s David Spencer, associate professor of aeronautics and astronautics, aims to develop a system that in the future would deorbit spacecraft launched by companies like SpaceX, OneWeb, and Boeing, as the spacecraft complete their missions. A space junk animation is available here.

Interestingly, when it comes to naming, many new institutes and universities are borrowing from the past. Nalanda was an ancient seat of learning, and is a modern university now. Takshashila and Ashoka, too, invoke a celebrated past. Now, Plaksha (Sanskrit for the ficus tree; many a gurukulas are imagined to have flourished under its shade) joins the league. While the campus will be ready only by 2021, Plaksha has announced its first course, the Technology Leaders Fellowship Program (TLFP), curated by Arvind Raman, senior associate dean of Faculty, Purdue University, and an academic advisor to Plaksha. A residential programme, TLFP will start in August 2019 at the upcoming Plaksha Innovation Center in Gurgaon. 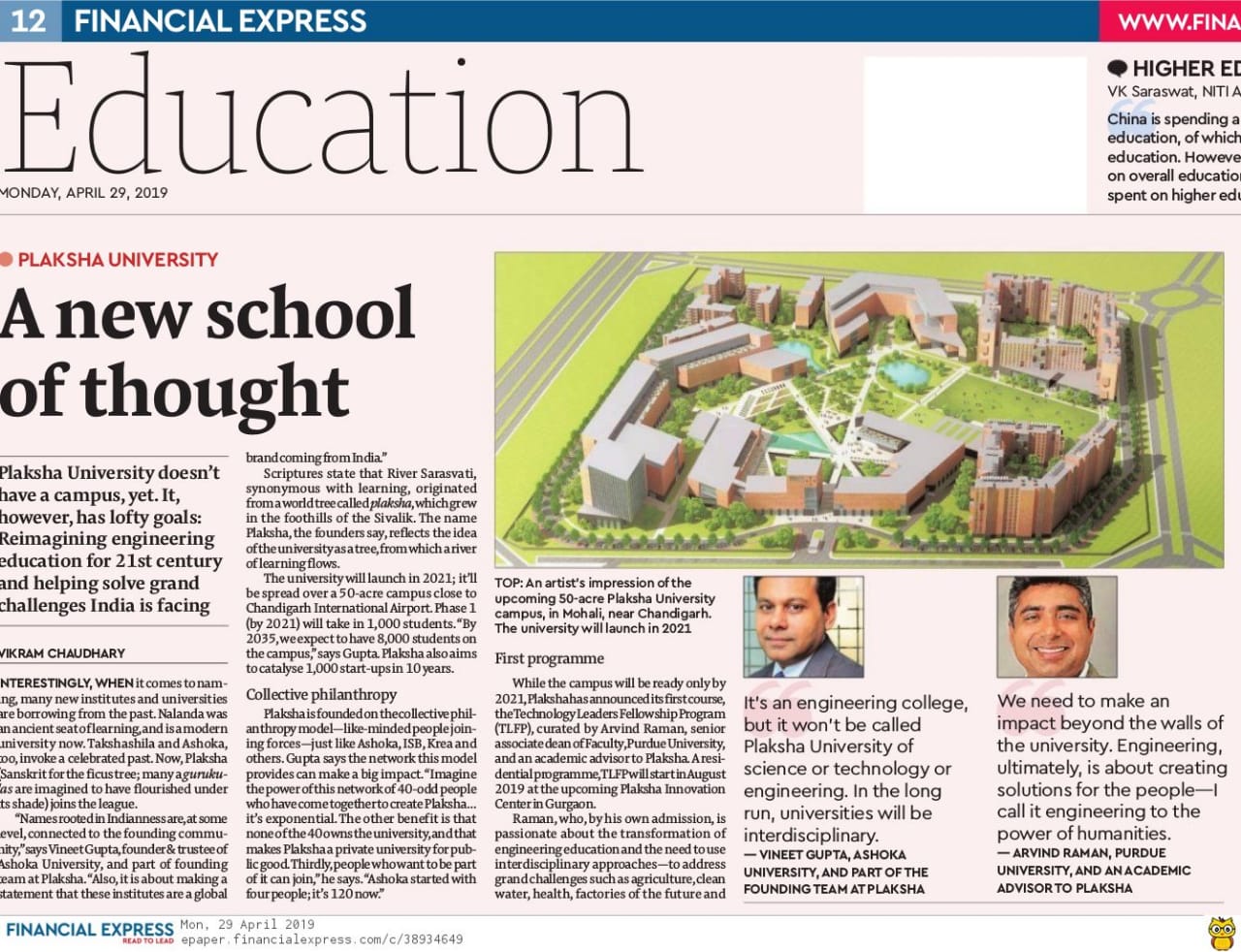 ...Plaksha, Raman adds, has three goals: “One is reimagining engineering education for the 21st century, and how to integrate social sciences with engineering. Two, how can engineering solve grand challenges India is facing—such as cleaning River Ganga or making agriculture sustainable in Punjab—and to solve these problems, we need interdisciplinary approaches. For example, we are talking about AI and ML, but we need to think how these new-age technologies will solve societal challenges. Three, making an impact beyond the walls of the university; innovation cannot be standalone.”

New hybrid energy method could fuel the future of rockets, spacecraft for exploration

A new propellant formulation method to use graphene foams – material used in electronics, optics and energy devices – to power spacecraft is being developed in Purdue University's Maurice J. Zucrow Laboratories, which is the largest academic propulsion lab in the world. The research is showing success at increasing burn rate of solid propellants that are used to fuel rockets and spacecraft.

New hybrid energy method could fuel the future of rockets, spacecraft for exploration

The conventional method of using advanced metals in manufacturing is costly, since they tend to be difficult to sculpture. A Purdue University team created a method for applying a designer surface-active agent to the surface of a metal to make it easier to cut and shape the material into parts and pieces. It’s a growing industry – the global metal fabrication market value is expected to reach $24 billion by 2024.