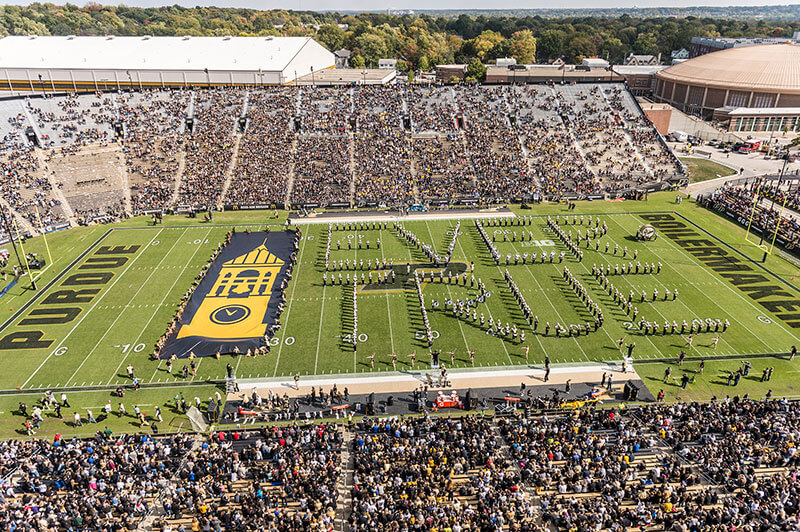 Giving to Purdue hit an all-time-high $351.9 million from a record 85,465 donors during the fiscal year that ended June 30. On Oct. 15, during the university’s Homecoming celebration, the "All-American" Marching Band performed "The Power of the Dream," which serves as the theme song for "Ever True: The Campaign for Purdue University." (Purdue Research Foundation photo/Gerry Robiños) Download image

WEST LAFAYETTE, Ind. — A record 85,465 Purdue alumni, faculty, staff, retirees, students, parents and friends donated to the university during the fiscal year that ended June 30, spurring 2016-17 to an all-time-high $351.9 million raised for the year. It marks the first time in Purdue’s history that donors have contributed more than $300 million a year for three years in a row.

The total includes a record $75.4 million for student support and boosts "Ever True: The Campaign for Purdue University" to $1.514 billion toward its $2.019 billion goal. The seven-year "Ever True" campaign’s silent phase began July 1, 2012. The campaign was publicly announced Oct. 9, 2015, and it concludes June 30, 2019, during the university’s 150th anniversary year.

"Thanks to our generous donors, Purdue continues to strengthen its reputation in teaching and research while remaining affordable and accessible to brilliant young minds," said Purdue President Mitch Daniels. "We’re forever grateful to all who helped, and especially to those thousands of donors who participated for the first time."

Records that Purdue donors set this year include:

* Number of individual donors: 85,465, an increase of 3.5 percent from last year’s record of 82,598. This number includes 16,065 first-time donors to Purdue. Gifts from corporations and foundations also contributed to the total raised.

* Largest single-day fundraising campaign in higher education: $28.2 million from Purdue Day of Giving, which included record participation by Purdue faculty and staff, as well as alumni, students, parents, retirees and friends from all 50 states and 56 countries around the world.

It’s all part of another strong year of giving for the university, which saw the launch of a parent- and family-focused fundraising effort, an international engagement campaign and, most recently, a campus campaign inviting faculty, staff, retirees and students to support Purdue through private giving.

"When I pause to consider Purdue’s essential contribution to my success and life, the role that Purdue played in the lives of my children and in the lives of the students I mentored, why shouldn’t I want to give to Purdue?" said Frank Brown, a Purdue retiree and donor to the newly launched campus campaign. Brown, who received the Distinguished Science Alumni Award from Purdue, served the university as director of the pharmaceutical sciences program and as adjunct professor after a 31-year career at Eli Lilly and Co.

To date, 171,941 donors have participated in "Ever True"—the largest capital campaign in Purdue’s history—and funds raised include $309 million for student support, $424 million for programs, $303 million for faculty, $185 million for facilities and $293 million for other, unrestricted initiatives.