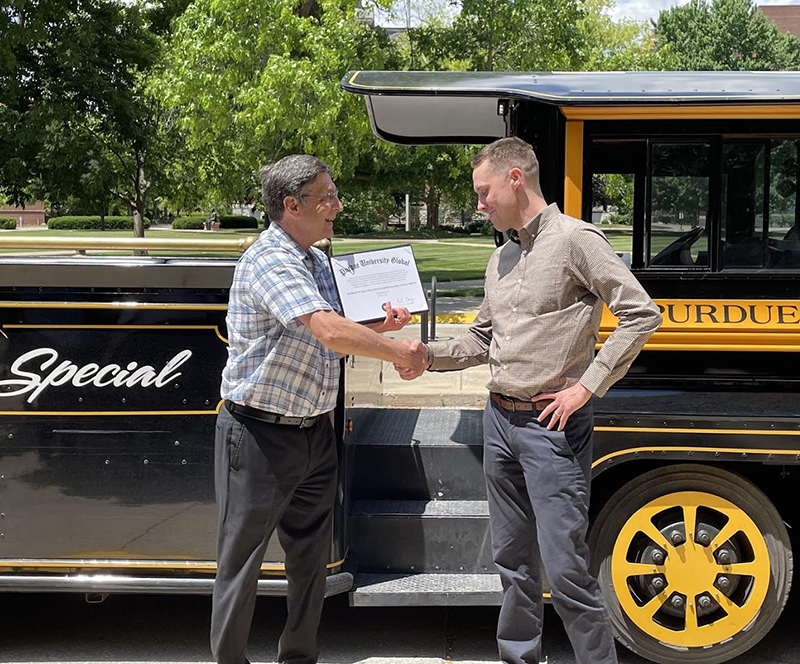 Purdue Global has established its first endowed scholarship, in honor of Morgan Burke, who played a key role in the launch and development of the university.

Burke, who served as vice president and director of intercollegiate athletics at Purdue University from 1993 to 2016, subsequently was a university vice president for special projects, most notably working on Purdue Global initiatives.

The Morgan Burke Endowed Purdue Global Scholarship will be used for Purdue Global near-graduates who need financial assistance to complete their degree. Burke believed strongly in the importance of providing opportunities for adult learners, including workers who experienced job losses and would benefit from additional education through Purdue Global.

On June 15 – the one-year anniversary of Burke’s death after a yearlong battle with amyloidosis – Purdue Global Chancellor Frank Dooley presented Burke’s younger son, Pat, with a certificate recognizing the establishment of the scholarship. The certificate read: “Morgan Burke understood the importance of hard work and the dedication to purpose required to achieve difficult goals. His faith, his positivity, his loyalty to those he loved and worked with, and his ceaseless efforts to improve the world around him made him an essential member of the Purdue Global Advisory Committee.”

The scholarship was fully funded through efforts on Purdue Day of Giving in 2020 and 2021, and the first recipient(s) will receive awards in 2022 after the funds have been fully vested for one year.