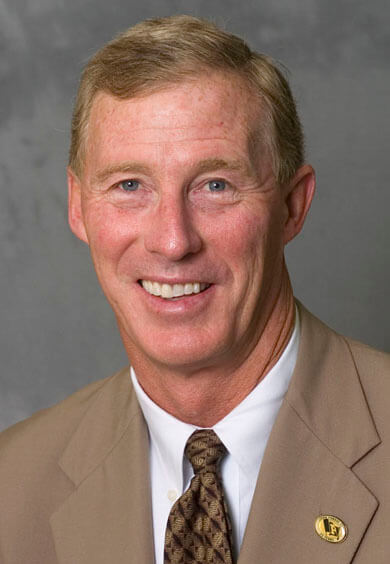 WEST LAFAYETTE, Ind. — Morgan J. Burke, who served as vice president and director of intercollegiate athletics at Purdue University from 1993 to 2016, died Monday (June 15) at his home in West Lafayette after a yearlong battle with amyloidosis. He was 68.

Since retiring as athletics director, Burke was a university vice president for special projects, most notably working on the launch and development of Purdue University Global.

“Morgan left an indelible mark on Purdue Athletics, and thousands of student-athletes benefited from his faithful leadership,” Purdue President Mitch Daniels said (see message to campus). “He was the ultimate competitor, and his passion for the Boilermakers was second to none. He continued to serve the university the last four years, doing everything he could to strengthen our mission. Our deepest condolences to Kate, Joyce, Morgan Jr. and Pat.”

Burke’s tenure as athletics director ranks as the longest in school history and upon his retirement was the fourth-longest tenure at Football Bowl Subdivision institutions. He made his name as one of the visionary leaders in intercollegiate athletics.

Burke worked vigorously to create an environment that fostered both academic and athletic success among Purdue’s student-athletes. No one wanted to see the Boilermakers succeed more than Burke did, and few expended more energy cheering them on to victory and graduation.

When Burke succeeded George King, he pledged to build on the foundation already in place. Working with coaches and staff, he set aggressive goals. The department’s mission outlined its goals for “Developing Champions/Developing Scholars/Developing Citizens.”

On the athletics side, Burke’s expectation was to improve the position of Purdue teams in the Big Ten and nationally. Significant strides were made on both fronts. In 2009-10, 14 teams finished in the upper half of the Big Ten, the high-water mark in Burke’s time at Purdue. On the national scene, 14 squads earned NCAA postseason opportunities in 2011-12, the most in school history.

Two teams won NCAA championships, women’s basketball in 1999 and women’s golf in 2010, and eight student-athletes captured a combined 14 individual national crowns. The football team embarked on a run of 10 bowl games in 12 years from 1997 to 2008, and the men’s basketball team achieved an unprecedented string of back-to-back-to-back Big Ten championships in 1994, 1995 and 1996. All told, Burke oversaw 20 regular-season conference championships and 13 tournament titles.

Similar excellence was expected in the classroom, and student-athletes regularly performed equally to or better than the overall student body. The cumulative grade-point average for all Purdue student-athletes was above 3.0 for 15 consecutive semesters when Burke retired.

Recognizing the need for contemporary facilities, Burke and his staff identified and addressed construction and renovation projects benefiting every program – making an investment of more than a quarter of a billion dollars – with major makeovers to Ross-Ade Stadium, Mackey Arena, Holloway Gymnasium and the Birck Boilermaker Golf Complex, as well as the building of Alexander Field, Bittinger Stadium, Folk Field, Schwartz Tennis Center and the Boilermaker Aquatic Center, which was renamed in his honor in May 2017.

A 1973 Purdue graduate in industrial management and captain of the swimming team his senior year, Burke was a member of Phi Beta Kappa scholastic honorary. He earned a master’s degree in industrial relations from Purdue in 1975 and a law degree from John Marshall Law School in Chicago in 1980. Burke pursued a successful career with Inland Steel Co. after law school, moving through 13 positions in an 18-year span. He was vice president when he departed to return to Purdue.

Beyond Purdue, Burke was past president of the Division 1A Athletic Directors Association and served on the NCAA Leadership Council and several Big Ten boards (Executive, Program/Budget and Compliance committees) and NCAA working groups (Championships and Competitions and Postseason Football committees).