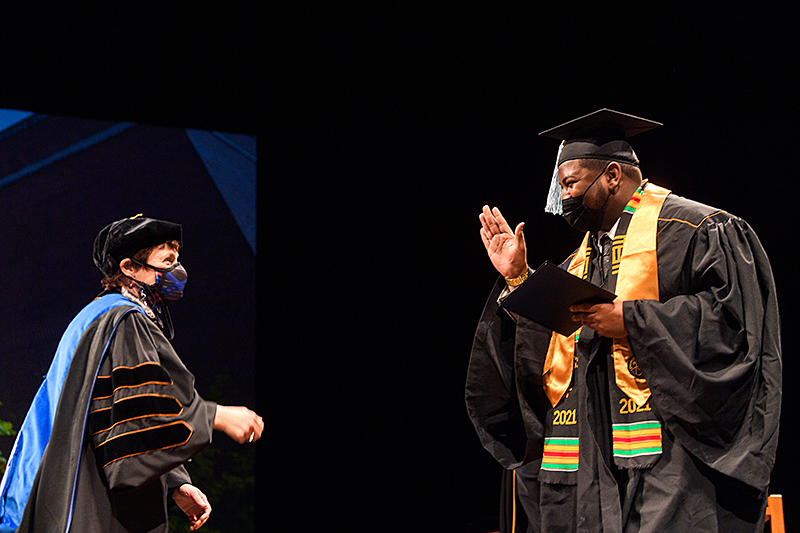 A Purdue University student celebrates onstage upon receiving his degree during the winter commencement ceremony on Saturday (Dec. 18). More than 2,600 candidates received their Purdue degrees across three ceremonies over the weekend. (Purdue University photo/Rebecca McElhoe)

WEST LAFAYETTE, Ind. - Thousands of Purdue University students set out on life-changing journeys several years ago, taking their small steps across the campus during Boiler Gold Rush orientation. And thanks to their persistent pursuit together, ever innovating in the midst of a global pandemic, they gathered Saturday (Dec. 18) and Sunday (Dec. 19) at Elliott Hall of Music to celebrate their graduation and next giant leaps into the world. 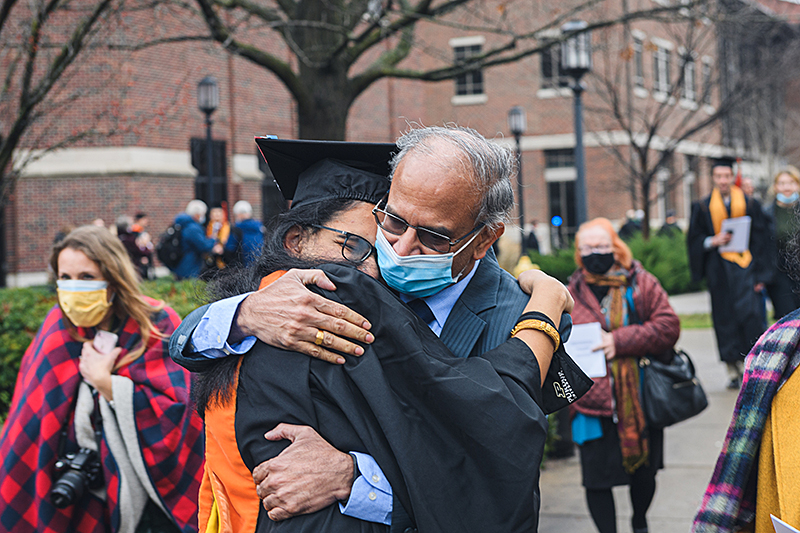 The third commencement ceremony was Sunday and featured all Ph.D. candidates.

Keith J. Krach, Purdue alumnus, former U.S. undersecretary of state and former chairman of the Purdue Board of Trustees, was keynote speaker at the Saturday ceremonies. Randy Roberts, Distinguished Professor of History and 150th Anniversary Professor at Purdue, keynoted the Ph.D. ceremony.

Krach is a businessman, Silicon Valley innovator, philanthropist and public servant. He has brought transformational leadership to multiple sectors, including robotics, engineering, commerce, education, philanthropy, economic statecraft and even the way people sign. He most recently served as undersecretary of state, leading United States economic diplomacy and having the rare distinction of being unanimously confirmed by the U.S. Senate.

Krach served as DocuSign chairman and CEO for 10 years; Ariba co-founder, chairman and CEO; chairman of Purdue’s Board of Trustees; Angie’s List board chairman; co-founder and chief operating officer at engineering software leader, Benchmark Capital’s first entrepreneur-in-residence; and international president of Sigma Chi fraternity. Among his honors, he was selected as 2000 EY National Entrepreneur of the Year; 2019 Harvard Business School Leader of the Year and youngest-ever vice president of General Motors Corp. Krach holds a bachelor’s degree and an honorary doctorate in industrial engineering from Purdue and an MBA from Harvard.

Randy Roberts was the 2015-16 Charles Boal Ewing Chair of Military History at the U.S. Military Academy. In addition to winning the Charles B. Murphy Outstanding Teaching Award at Purdue, he received the Carnegie Foundation for the Advancement of Teaching Indiana Professor of the Year and was a 2022 finalist for the Robert Foster Cherry Award for Great Teaching, given by Baylor University.  He specializes in military history, sports history and popular culture.

Roberts is also an award-winning, best-selling author. He has won several national book awards, and has been nominated for a Pulitzer Prize four times. One of his more recent books, co-authored with Johnny Smith and titled “Blood Brothers: The Fatal Friendship Between Muhammad Ali and Malcolm X,” has been made into a Netflix documentary. Roberts has served frequently as a consultant and on-camera commentator for PBS, HBO and the History channel. Two of the documentaries he was featured on won Emmy Awards.

Student responders also participated in the ceremonies. The Division I responder was Austin B. Berenda, a student in the College of Agriculture from Earl Park, Indiana. He received a Bachelor of Science in agricultural economics, with a minor in political science and a concentration in quantitative analysis with distinction. The Division II responder was Anusha KV Lakshmi Dharmavathi, a student in the College of Health and Human Sciences from Ashburn, Virginia. Dharmavathi received a Bachelor of Science from the HHS Honors program in biomedical health sciences with minors in biological sciences and dance.

The commencement exercises are livestreamed.