From chalkboards to the silver screen: Purdue professor's teaching extends beyond the classroom 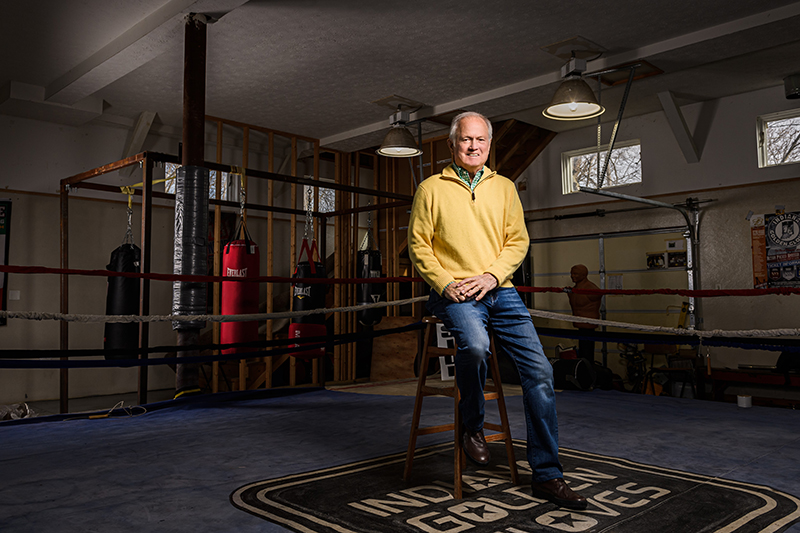 Randy Roberts, professor of history at Purdue, has been selected as a finalist for the prestigious Robert Foster Cherry Award for Great Teaching. (Purdue University photo/Rebecca McElhoe)

WEST LAFAYETTE, Ind. – Author of more than 20 nonfiction books, consultant or on-screen expert for more than 50 documentaries and professor for more than 30 years, it would be difficult to underestimate the number of people who have learned something from Randy Roberts, 150th Anniversary Professor and Distinguished Professor of History at Purdue University. This historian’s commitment to teaching has been recognized for one of the country’s most distinctive teaching awards.

Roberts has been selected as one of three finalists for Baylor University’s prestigious Robert Foster Cherry Award for Great Teaching.

Awarded in alternate years since 1991, the Cherry Award came from Baylor alumnus Robert Foster Cherry’s appreciation for the impact that teachers make in the classroom. In addition to being active and productive scholars, nominees must have proven records of exceptional teaching that has made a positive, inspiring and long-lasting impact on students.

As a Cherry Award finalist, Roberts, who teaches in Purdue’s College of Liberal Arts, will receive $15,000 and the Department of History will receive an additional $10,000. Roberts will present a Cherry Award lecture at Purdue as well as a series of guest lectures at Baylor.

The award’s funding is intended to help teachers and their departments fund generative conversations and innovations in teaching practices, and the associated lectures ensure that students at both Baylor and the recipient’s home institution have opportunities to learn from a teacher with a proven track record of excellence.

“Professor Roberts is a terrific scholar and a legendary classroom teacher at Purdue,” said David A. Reingold, the Justin S. Morrill Dean of Liberal Arts. “It’s no surprise that he would be a finalist for the Cherry Award, which honors great teachers. Professor Roberts is emblematic of the commitment to education of our faculty in the College of Liberal Arts. We wish him the best as a finalist for this award.”

In his teaching, research and outreach, Roberts focuses on the intersections of political and popular cultures as demonstrated through poignant moments in American sports, military and popular history. As a historian and educator, Roberts believes he has a responsibility to reach as many people as possible, an objective that has shaped the way he teaches in the classroom and how he makes his research accessible to wider audiences.

“I’ve always tried to reach as many people as possible. The classroom offers an important audience. Books expand that reach. Documentaries expand that reach even further. Lectures, on and off campus, do the same,” Roberts said. “I want to share my enthusiasm for what history has to offer to as many people as possible, and I’m grateful that the Cherry Award lectures will help me do so.”

Roberts has acted on his commitment to reaching people on and beyond campus. He has an impressive catalog of radio, television and film appearances, acting as consultant or host on more than 50 documentaries on a variety of networks. Notably, he has served as a consultant and on-camera expert for two Ken Burns documentaries as well as the Emmy Award-winning series “10 Days that Unexpectedly Changed America.”

While regularly teaching courses on sports and race, Roberts also has authored more than 20 nonfiction books on historically significant American figures, including John Wayne, Mickey Mantle and Joe Louis. He is a four-time nominee for the Pulitzer Prize in biography and has won several national book awards. And a recent biographical work, “Blood Brothers: The Fatal Friendship Between Muhammad Ali and Malcolm X,” is being adapted into a televised dramatic limited series.

Roberts is known for promoting discussion in his classroom, and he has been a successful mentor to both undergraduate and graduate students. Some of his students have gone on to become professors, and Roberts has co-authored three books with former student Johnny Smith.

“Randy Roberts is one of the extraordinary scholars whose passion for history inspires generations of students at Purdue and beyond,” said Frederick R. Davis, head of the Department of History and R. Mark Lubbers History of Science Chair. “As in his numerous books and publications, Professor Roberts captivates students with fascinating stories from American history, sport history and the history of World War II, to name a few in the wide range of topics he covers. His selection as a finalist for this prestigious award just adds to the long list of his achievements at Purdue.”

If he is chosen for the Cherry Award, Roberts will receive $250,000, the largest monetary award presented to an individual for teaching, and an additional $25,000 for his department. He also would head to Baylor to teach in residence for a semester.

Roberts earned his Ph.D. from Louisiana State University and has been teaching at Purdue since 1988. Named a 150th Anniversary Professor for exceptional teaching and mentorship in 2018, he held the Charles Boal Ewing Chair in Military History at the U.S. Military Academy at West Point in 2015-16.

From the College of Liberal Arts, Roberts has earned the Kenneth Kofmehl Outstanding Undergraduate Teaching Award and is a two-time winner of Liberal Arts’ Teacher of the Year Award. He is a founding member of the Teaching Academy.

The recipient of the Cherry Award will be chosen from among the three finalists in spring 2022.