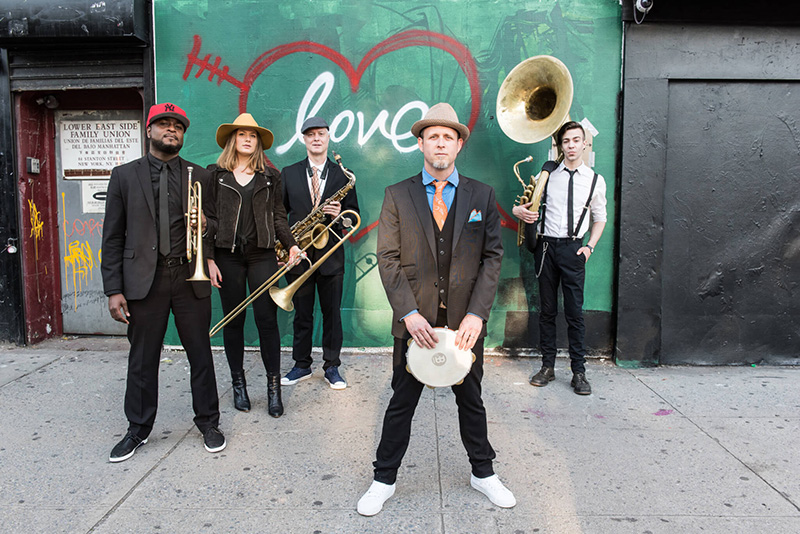 WEST LAFAYETTE, Ind. – West Lafayette’s acclaimed internationally flavored street festival returns with music, cuisine, culture, crafts, and pop-up performances from around the world. The main stage will feature traditional Iraqi maqams on the oud and santour from The Rahim AlHaj Trio, contemporary funk and forró from Nation Beat, and the fusion of fiery bomba with folkloric guaracha and salsa from Los Hacheros.

The annual West Lafayette Global Festival celebrates the diverse cultures of Purdue University and West Lafayette and marks 26 years of jubilant expression of this global village that is home.

The festivities start at 3:30 p.m. ET on Saturday (Sept. 18) on Northwestern Avenue and South Street in downtown West Lafayette. The event is free to attend and open to the public. No tickets are required for Global Fest.

The Rahim AlHaj Trio opens the main stage at 5:30 p.m., followed by Nation Beat at 7 p.m. Los Hacheros will close the festival with its performance at 9 p.m.

“The city is excited to welcome thousands of new students from around the world,” says West Lafayette Mayor John Dennis. “We can’t wait to see our longtime residents sharing a 26-year tradition of international celebration with the newest members of our community in the streets of downtown West Lafayette.”

The trio performs AlHaj’s intricate compositions that delicately combine traditional Iraqi maqams with contemporary styling and influence. His compositions evoke the experience of exile from his homeland and of new beginnings in his adopted country. His pieces establish new concepts without altering the foundation of the traditional “Iraqi School of Oud.”

Nation Beat’s live shows have taken on an almost mythological aura for their ability to lift the souls and the feet, of their growing cross-cultural audience. Band leader and drummer/percussionist Scott Kettner has long been at the forefront of merging different musical elements together from the earliest days of Nation Beat's Brazil meets North American music. With tenor saxophonist Paul Carlon, the band entered a new phase in its cross-cultural explorations where brass and percussion explode in a jazz-infused, funkified New Orleans-meets-Brazil carnival sound.

Brooklyn’s Los Hacheros are modern-day torchbearers of the Golden Age of Latin music—reviving folkloric styles like son montuno, guaracha and salsa, and often combining them with Bomba, a fiery rhythm from the mountains of Puerto Rico. The group recorded its sophomore album “Bambulaye” live to vintage analog tape, giving the music a raw, but warm and open sound similar to the Latin legends that have inspired them.

“Los Hacheros has the magic of group improvisation,” bassist William Ash says. “We play in a style that is swing oriented and emphasizes the Cuban clave like great ones of old:  “Arsenio, Reve, Ritmo…”

“We’re back with live music and dance in the streets of West Lafayette,” says Todd Wetzel, assistant vice provost for student life and executive director, Purdue Convocations/Hall of Music Productions.  “We are thrilled to sponsor the main stage events of Global Fest in partnership with the city of West Lafayette and the International Center of West Lafayette.  The three ensembles offer a taste of music from the Middle East to the Americas and will surely have festival-goers dancing in the streets late into the evening.”

3:30 p.m.  – Gates open, followed by opening remarks from the stage

In addition to the main stage events, pop-up performances will be featured throughout the festival grounds including a Lion/Dragon Parade at 4:25 p.m. and 6:50 p.m., and performances from Okinawa Yuyukai at 5:15 p.m. and 6:40 p.m. For more details and up to date information go online.

Global Fest is featured in Purdue’s Weeks of Welcome, an initiative by the Purdue vice provost for student life to highlight the thousands of events and programming taking place during the first six weeks of the fall 2021 semester. Global Fest attendees are encouraged to share content on social media with the hashtag #PurdueWoW.

Initiated in 1902, Purdue Convocations was one of the first professional performing arts presenters in the United States. Each year, Convocations offers the region 30-40 performances of widely varying genres: Broadway-style shows, theater, dance, children's theater, world music, jazz, and chamber music, along with rock, pop, country and comedy attractions. With a vision for connecting artists and audiences in artistic dialogue and for drawing in academic discourse, Purdue Convocations aims to promote frequent exposure to and familiarity with human cultural expression in a multitude of forms and media.