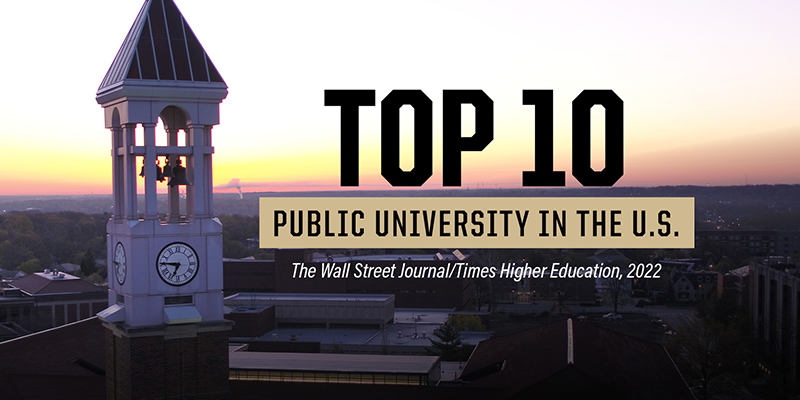 WEST LAFAYETTE, Ind. — How valuable is a Purdue University education?

And it’s a direct result of Purdue national academic reputation among prospective students and families — and among employers looking to hire the best and the brightest.

That reputation was reflected on Tuesday (Sept. 21) in yet another highly regarded national ranking. The Wall Street Journal/Times Higher Education rankings have Purdue at No. 7 in the Best Value, tops in the Big Ten. At No. 10 among public institutions and 48th among about 800 schools overall, this marks the sixth consecutive year that Purdue has been among the nation’s best schools in The WSJ/THE rankings.

Purdue also is No. 4 in Engagement, tied with seven other schools, including the University of Michigan and University of Notre Dame.

The newest ranking follows this month’s U.S. News & World Report undergraduate rankings that positioned Purdue among the top 10 Most Innovative Schools in the nation for the fourth consecutive year. Purdue also is listed in this month’s Forbes analysis of “The universities with the most graduates working at Fortune 500 companies.”

The Wall Street Journal/Times Higher Education rankings focus on four key pillars: 40% of the overall score is based on student outcomes, 30% from resources, 20% from engagement with students and 10% from the learning environment.

Specific to engagement, most of the data is gathered through the Times Higher Education student survey, analyzing student engagement, student recommendation, interaction with teachers and students, and number of accredited programs. The ranking includes clear performance indicators designed to answer the question that matters most to students and their families when making one of the most important decisions of their lives – who to trust with their education.

Purdue boasts a 13:1 student-faculty ratio and has a number of student success programs in place, along with programs to help students graduate early such as Purdue’s Degree in 3 in the College of Liberal Arts and Purdue Polytechnic Institute. In April, the university launched Purdue’s Next Moves, five new distinct strategic initiatives designed to advance the university’s competitive advantage in its continuing quest for leadership among the world’s top research and teaching institutions. The university also has announced a graduation civics literacy requirement beginning with students who enrolled this fall.

Each year, Purdue hosts the largest outdoor collegiate job fair led by a student organization in the country, historically attracting as many as 400 companies and 12,000 students to the Industrial Roundtable.

This fall, Purdue welcomed 10,191 freshmen, its largest class in history, and a record enrollment of 49,639. Student surveys highlight Purdue’s response to the pandemic and its reputation for affordability and high-quality education as key admissions drivers.

The complete WSJ/THE rankings can be found online.