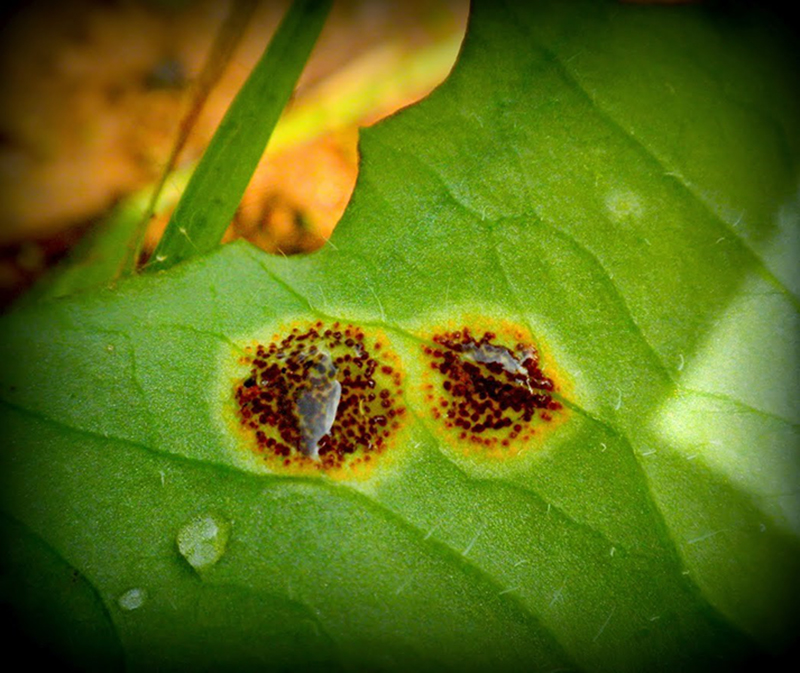 Pucciniales, a type of parasitic microfungi that causes rust disease, is shown on a leaf. Purdue professor Catherine Aime is one of the only mycologists in the nation who specializes in Pucciniales. With support from the National Science Foundation, she and her team will work to identify thousands of kinds of parasitic microfungi across the globe. (Image provided by Catherine Aime)

WEST LAFAYETTE, Ind. – The world around you is teeming with life you can’t see. Plants, soil, water, insects – even your hair and skin – are home to microfungi, and they both sustain and devastate life on our planet.

Parasitic microfungi, which live off host plants and animals, maintain balance in natural ecosystems. But in developed areas, they can quickly destroy crops and financially devastate communities.

A team led by Purdue University mycologist Catherine Aime will venture to the tropics – where the vast majority of emerging crop diseases originate – and sites across the globe to discover and identify thousands of kinds of parasitic microfungi.

“To effectively combat any disease, you need to identify it and understand how it works,” said Aime, a professor in the Department of Botany and Plant Pathology. “Parasitic microfungi are the major cause of crop disease in the world. Through this work we hope to stay one step ahead, so that when the next disease strikes, we won’t be starting from scratch.”

The team will focus on two parasitic microfungi groups: Pucciniales, which causes rust disease in plants, and Laboulbeniales, which parasitizes insects. The project is supported by $1.5 million from the National Science Foundation, and also seeks to help resolve the “Tree of Life” for these groups.

“Microfungi are among the least understood living organisms on the planet, and they can be rule breakers,” Aime said. “Rusts don’t follow the typical patterns of evolution. Where we expect to see the genomes of parasites become compacted over time, theirs have expanded and we don’t know why. This study could lead to a fundamental change in the way we understand genome architecture. The implications could extend even to organisms beyond fungi.”

Aime is a pioneer in the identification of parasitic microfungi that cannot be put into culture. Her team will arrange community bat nights, in order to capture bat flies, and roach hunts to round up samples of the Laboulbeniales microfungi.

She also will use DNA-sequencing techniques to perform identification that previously was impossible.

“Many microfungi viewed under a microscope are indistinguishable,” she said. “For instance, Pucciniales has five different spore stages, each of which looks different within a species. But the same spore stages can look the same between species. This makes identification, or even understanding a single life cycle, difficult.

“DNA sequencing,” Aime added, “allows us to clearly see distinctions and properly identify separate species and stages of development. We chose two of the least studied – but very consequential – types of microfungi, and we will be providing the first genomic resources for most of the species within them.”

The research will evaluate what geographic regions have the highest diversity of parasitic microfungi and will test the latitudinal gradient hypothesis established for plants and animals.

“This hypothesis suggests diversity is negatively linked to increasing latitude,” Aime said. “However, some recent studies suggest the opposite to be true for fungi. We think this may be due to the patchiness of fungal distribution in the tropics, like a quilt where one square doesn’t tell the story of the full, colorful piece. Our standardized sampling in tropical and temperate areas will, for the first time, allow for a robust comparison.”

Aime is one of the only academic mycologists in the nation who specializes in Pucciniales, and she said part of this project seeks to build the capacity for mycological studies in the U.S. and other countries.

“There are more than six times as many species of fungi as plants, but there aren’t very many mycologists at universities,” she said. “It is a new field, relatively speaking, because until the 1970s fungi were classified under the plant kingdom. Now we know fungi is a kingdom itself, and the organisms actually have more in common with animals than plants. There is so much to learn, and we need to scale up mycological education and professional training.”

The project will include undergraduate and graduate level education, community engagement, and the organization of workshops and fieldwork programs. Another important aspect will be the creation of a platform to house and share a rapidly growing microfungi dataset, Aime said.

“We expect to create the most exhaustive documentation of microfungi in these two orders to date,” she said. “This massive dataset will be a rich and growing resource that can inform fungal systematics, ecological and evolutionary research.”

The flipside of disease prevention is the need to understand parasitic microfungi to sustain ecosystems.

“In nature, these parasites are critical to ecosystem health,” Aime said. “They play an important role by encouraging diversity in their hosts. They prevent one species from taking over and maintain balance. If we want to preserve or restore habitats, we have to look at the whole system, including what we can’t see. These microbes are as important as the plants and animals.”