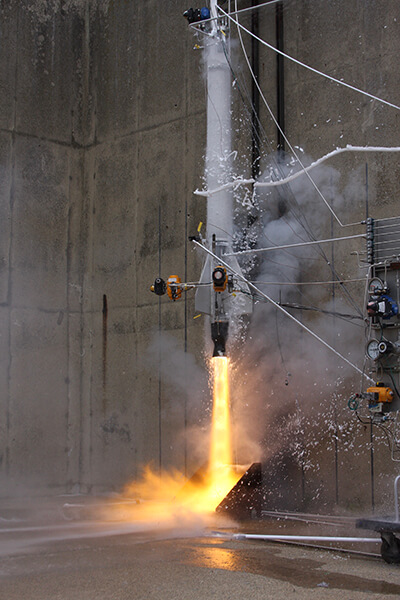 Purdue student-designed liquid oxygen/liquid methane rocket fires at the Maurice J. Zucrow Laboratories. Purdue will provide Morgan State with the engine on this rocket for its vehicle. (Purdue University photo)

WEST LAFAYETTE, Ind. — Purdue University, home to 25 astronauts and a leading aeronautics and astronautics program, will lend its expertise to Morgan State University as it launches its own liquid-fueled rocketry lab and training program, a first among Historically Black Colleges and Universities.

As part of a partnership between Purdue and Morgan State, engineering students at the HBCU can also earn a degree from Purdue. Students studying civil engineering or engineering physics will complete three years at Morgan, earning enough credits for a bachelor’s degree, before moving to West Lafayette, where they can earn a Bachelor of Science in Aeronautical and Astronautical Engineering. Morgan State’s Board of Regents approved the program in principle during its fall quarterly meeting. The two universities will work to finalize and get final approvals on the plan.

It’s called 3+2 – the three years at Morgan State followed by two years at Purdue – resulting in student earning baccalaureate degrees in distinct majors from both institutions. The partnership in aerospace education was sparked by a Morgan State team winning  a $1.6 million grant from Base 11 to build a rocketry program. The California-based Base 11 is dedicated to underrepresented minority education. particularly in science, technology, engineering and math – the STEM – fields. 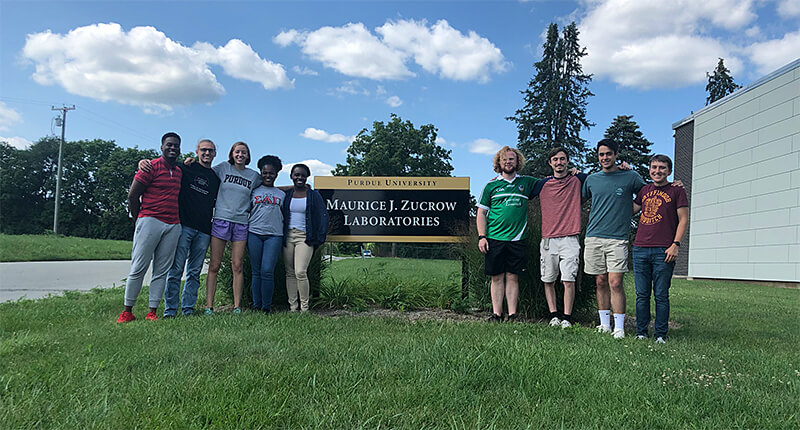 “One area that we have not done well enough in is the successful recruitment and preparation of enough students and young people of color, first-generation students and low-income students,” said Purdue President Mitch Daniels. “We’re working very hard on this. We started the Purdue Polytechnic High Schools to increase our numbers of minority and low-income students who will pursue STEM careers. We have to be much better in this area, and the program with Morgan State fits directly into this ambition.”

Purdue’s list of 25 astronauts includes the first man to walk on the moon and the last to do so in Neil Armstrong and Eugene Cernan. The university also has had four female astronauts and numerous grads who work in various facets of the NASA program. Mark Geyer, director of the Johnson Space Center, NASA’s mission control and home base for astronaut training, is a graduate of the School of Aeronautics and Astronautics.

Purdue’s School of Aeronautics and Astronautics is ranked fifth in the latest U.S. News & World Report undergraduate rankings, released in September. The university also is the No. 5 Most Innovative University in the United States.

Purdue also has established itself as a leading research institution in hypersonics. Adranos Inc., a Purdue-affiliated company that develops a high-performance, solid rocket fuel called ALITEC for long-range missile and space launch systems, has obtained $2.1 million in funds from the U.S. Department of Defense, Joint Enhanced Munitions Technology Program (JEMTP).

For Morgan State, the decision to partner with Purdue was about more than just astronauts and rocketry expertise. Morgan State President David Wilson cited the fact that the National Society of Black Engineers was founded at Purdue in 1975.

“I appreciate Dr. Wilson recalling that the wonderful Society of Black Engineers that now has chapters all over the country was born here at Purdue,” Daniels said. “We are very excited about welcoming outstanding young men and women from Morgan State to our campus, and we are looking forward to supporting the rocketry program and helping it get off the ground.”

The partnership with Morgan State fits directly into Purdue efforts to provide opportunity for minority students in the STEM fields. In Indiana, Purdue has two Purdue Polytechnic High School locations in Indianapolis and one in South Bend. Purdue created the Purdue Polytechnic High Schools to serve as an engine of upward mobility by building a pipeline of low-income and minority students to counteract the unacceptably small number emerging from the public education system, not just in Indiana, but nationwide.

This past summer, Purdue welcomed more than 1,000 new Boilermakers in getting an early start on their collegiate careers with the Summer Start and Early Start programs. Summer Start is a direct-admit program created in 2015 by Daniels to expand access to a Purdue education, especially among lower-income, first-generation and minority students who fell just short in the admissions process but are considered otherwise qualified to succeed at Purdue.