How to get through baseball season without being in the stands: Purdue student Twitter account can assist with keeping fans engaged

Note to Journalists: A photo of Jeremy Frank is available via a Google Drive folder. Journalists visiting campus should follow visitor health guidelines. 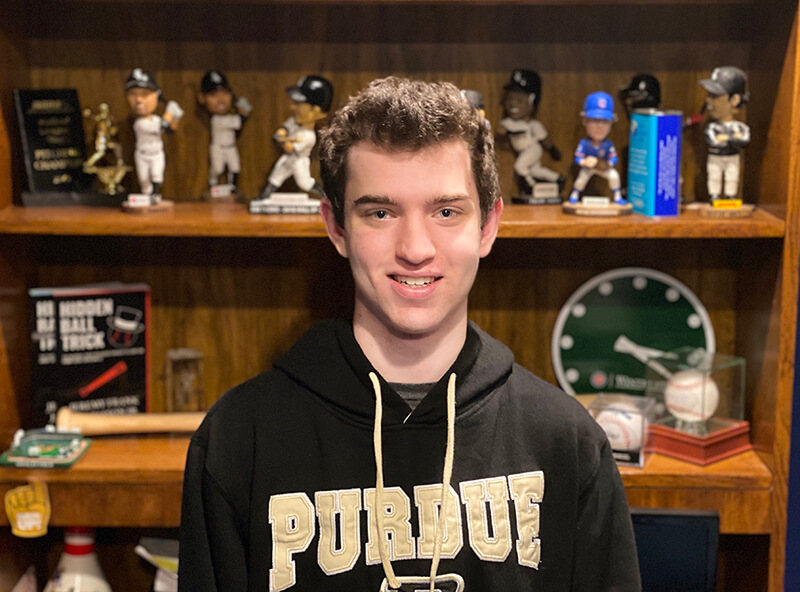 WEST LAFAYETTE, Ind. —The wait for the 2020 Major League Baseball season is over. A shortened season will begin Thursday, exciting many baseball fans including a Purdue University sophomore-to-be who runs an increasingly popular baseball Twitter page.

“I think I’ve realized how much I took baseball for granted because we’ve gone three or four additional months without it,” said Jeremy Frank, a data science major. “I’m pretty excited because this is the longest we’ve gone without baseball in quite a long time.”

Frank runs @MLBRandomStats, which features past and present baseball statistics and MLB commentary. The account has over 57,000 followers since launching in October 2015.

Frank’s popularity has continued to grow as he has gained media attention from Sports Illustrated, Fox 59, and on an episode of the “This is Purdue” podcast, as well as an appearance on a Korean Baseball Organization game telecast by ESPN (listen to the Purdue podcast).

While Frank regularly posts during the off-season, often about historic baseball statistics, he enjoys being able to post commentary and in-season statistics.

“I’m just looking forward to having new things to talk about,” Frank said. “Being in-season, it’s nice because during the off-season, the numbers don’t change. I’ve had my account for nearly five years now. Besides the things that have happened in the last five years, the first 150 years of baseball has all stayed the same.”

While a normal MLB season has 162 games and is played over six months, the 2020 season will consist of 60 games over two months.

“I try and watch as many games as I can to get a feel for what’s going on and post anything that is interesting. I think the content that I post with a shortened season will be similar to a regular season in terms of posting based on what happens in the games,” Frank said.

Besides his general excitement for the return of the MLB season, Frank is eager to see how the statistics may be affected by a shortened season.

“It’s a much shorter season so you could see some crazy statistics being posted. For example, it could be easier for someone to bat at a really high batting average because they don’t need to keep it up for as long. You could see those kind of things happening where you wouldn’t really see them in a regular season, but at the same time you’re not going to see someone who achieves 30 home runs this season. It would be pretty crazy if someone did,” Frank said.

Frank and fellow baseball enthusiast Jim Passon have co-authored two books on historic baseball statistics. The second volume, “Hidden Ball Trick: The Baseball Stats You Never Thought To Look For From 1920-1969,” was released in May.

Note to Journalists: A photo of Jeremy Frank is available via a Google Drive folder. Journalists visiting campus should follow visitor health guidelines.