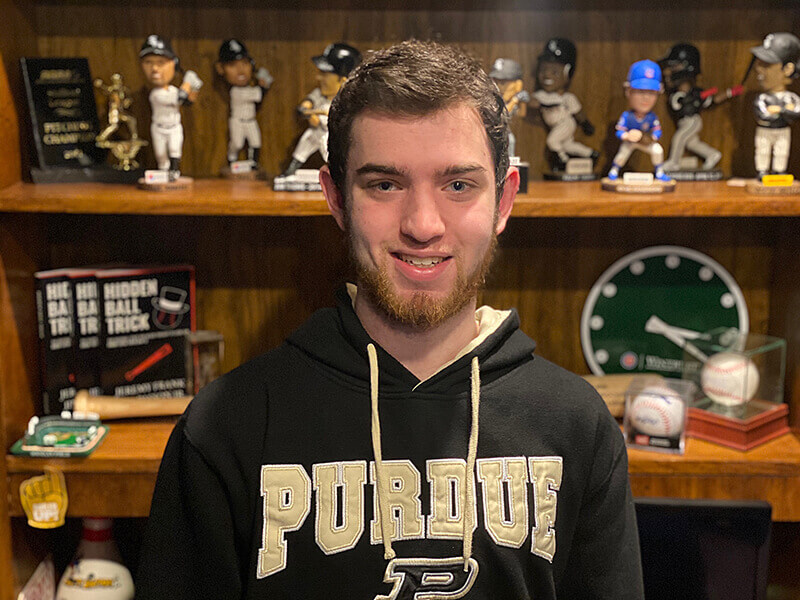 WEST LAFAYETTE, Ind. — The 2020 Major League Baseball season is on hold because of the COVID-19 pandemic, but a Purdue University freshman can help avid fans fill the void with an increasingly popular Twitter account.

Jeremy Frank, a data science major in Purdue’s College of Science, runs @MLBRandomStats, which features past and present baseball statistics and MLB commentary. The account has over 55,000 followers who want to hear what Frank has to say about stats, analysis and the history of America’s pastime. He began his Twitter account in October 2015 as a freshman at Stevenson High School, near his hometown of Buffalo Grove, Illinois.

“I was hoping to grow my name and show fans how much statistics are prevalent in baseball,” said Frank, a Chicago Cubs fan.

The popularity of Frank’s Twitter page grew from 15,000 followers in July 2018 to nearly 25,000 from one obscure tweet about Cincinnati Reds first baseman Joey Votto and the number of pop-ups, or infield fly balls, he hit. At the time of the tweet, Votto had hit only seven pop-ups in his nine seasons as a major leaguer. By comparison, the average for MLB players with the same number of plate appearances was approximately 127 pop-ups.

With more time at home due to the COVID-19 pandemic, Frank has launched his “Baseball Interview Series” on YouTube. He skypes prominent followers who either work in baseball or cover the game, such as Jason Benetti, Jon Sciambi and Foolish Baseball.

During the current MLB hiatus, Frank is tweeting out statistics about franchise records and comparing legendary players, and engaging followers with a tournament of every World Series winner using Twitter’s polling system. When the MLB season is in session, he prefers to live tweet or find statistics relevant to a particular game.

“Until the baseball season starts, I’ll tweet a lot of historical things,” Frank said. “If you are a huge baseball fan but aren’t a college student like I am, I still tweet a lot about baseball in the ’80s and ’90s and before. So, I may be tweeting about your favorite players from when you were my age as well as players that your parents and grandparents told you about.”

“The statistics aren’t just on the website for me to find and tweet,” Frank said. “I have to do a little bit of digging and analyzing, which is where data science comes into play.”

Beyond social media, Frank has co-authored a book, “Hidden Ball Trick: The Baseball Stats You Never Thought to Look For From 1876-1919 (Vol. 1),” with Jim Passon, co-host of the Romantic About Baseball podcast. Passon and Frank initially connected via Twitter, and the second volume of their book is due out in May.

“Baseball is one of the oldest American sports and they have data for it going back all the way, like 150 years,” Frank said. “There are a lot of interesting things you can dig up.”

Frank’s interest in baseball stems from his family’s appreciation for the game and his favorite movie, “Moneyball,” which sparked his curiosity in sports statistics analysis. The 2011 film opened his eyes to how much math played into baseball decision-making. The movie, the sport and a love of numbers all factored into pursuing data science.

Frank hopes to continue his passion beyond college by working in baseball, possibly for a major league team or as a sports statistician. Besides Twitter and YouTube, he also is growing connections at Purdue as vice president of the Sports Analytics club and was assisting the Purdue baseball team until the NCAA canceled spring sports.

Note to Journalists: Photos of Jeremy Frank are available on Google Drive.