Outsmarting the enemy: Treefrogs rely on illusions to find a mate without being eaten 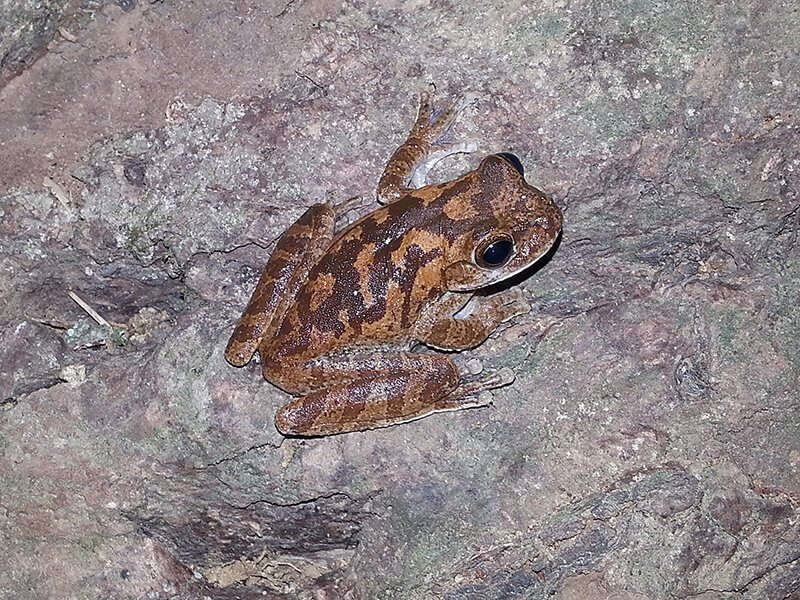 Researchers at Purdue University have discovered that male treefrogs reduce their attractiveness to predators and parasites by overlapping their mating calls with their neighbors. (Purdue University photo/Henry Legett) Download image

WEST LAFAYETTE, Ind. — Treefrogs become easy targets for predators and parasites when they send mating calls, but they’re finding a way to fool their enemies with a little help from a wingman.

Researchers at Purdue University have discovered that male treefrogs reduce their attractiveness to predators and parasites by overlapping their mating calls with their neighbors. By overlapping their calls at nearly perfect synchrony with neighboring treefrogs, an auditory illusion takes effect and those enemies are more attracted to the leading call, leaving the other frogs to find mates without risking their life. The work was recently published in American Naturalist.

“The male frogs are essentially manipulating the eavesdroppers through creating this auditory illusion,” said doctoral student Henry Legett, who led the research with Ximena Bernal, associate professor of biological sciences at Purdue University. “Humans experience this illusion too, it’s called the ‘Precedence Effect.' When we hear two short sounds in quick succession, we think the sound is only coming from the location of the first sound.”

Research at the Bernal lab focuses on the relationship between predation and communication – or what they simply refer to as eavesdropping.

“The illusion created by the male treefrogs calling in synchrony has no effect on female frogs, which was a surprising observation," Bernal says.

“These male frogs have figured out a way to trick these enemies. We thought the females might be more attracted to the leading caller, but it didn’t really affect attraction at all. It’s a win-win for the frogs because it helps reduce attacks from those enemies who were hoping to prey on the male frogs and females are not tricked by the illusion.”

The study included experiments using playbacks of recorded calls from speakers and sound traps both in laboratory and field settings at the Smithsonian Tropical Research Institute in Panama, where Bernal is a research associate and frequently visits to work with students. Researchers discovered that after the initial male treefrog sends a mating call, other frogs follow suit within milliseconds.

“It’s so fast, it’s almost like a reflex,” Legett said. “There’s no way their brains have time to process that information. They hear their neighbor and they react immediately.”

Bernal and Legett said the research has cultivated even more questions about how frogs communicate.

“You have to wonder why a male frog would call first, given that if increases his chances of being eaten,” Legett said. “It’s a very strategic game they’re playing. The frog that calls first might not get lucky that time, but maybe he knows he’ll get his chance the next time he hears one of his friends make the first call. These are the questions we’ll keep asking as we move forward.”

The work was supported by the National Science Foundation. In addition, Legett received an A. Stanley Rand Fellowship from the Smithsonian Tropical Research Institute and an A.A. Lindsey Graduate Fellowship from Purdue University to support the work.

Note to Journalists: A photo of a treefrog is available on Google Drive.

Mating signals have evolved to attract target receivers, even to the point of exploiting receivers through perceptual manipulation. Signals, however, can also expose signalers to nontarget receivers, including predators and parasites, and thus have also evolved to decrease enemy attraction. Here we show that male tree frogs (Smilisca sila) reduce their attractiveness to eavesdropping enemies (bats and midges) by overlapping their calls at near-perfect synchrony with the calls of neighboring conspecifics. By producing calls that closely follow those of other males, synchronizing S. sila take advantage of an auditory illusion where enemies are more attracted to the leading call. Female S. sila, however, are less susceptible to this illusion. Thus, synchronization among signaling males can result in acoustic crypsis from predators without affecting female attraction. Given the widespread use of conspicuous mating signals and eavesdropping enemies, perceptual exploitation of eavesdroppers is likely a common driver of signal evolution