More than meets the eye: How a veterinary ophthalmologist is addressing a disease that can affect golden retrievers 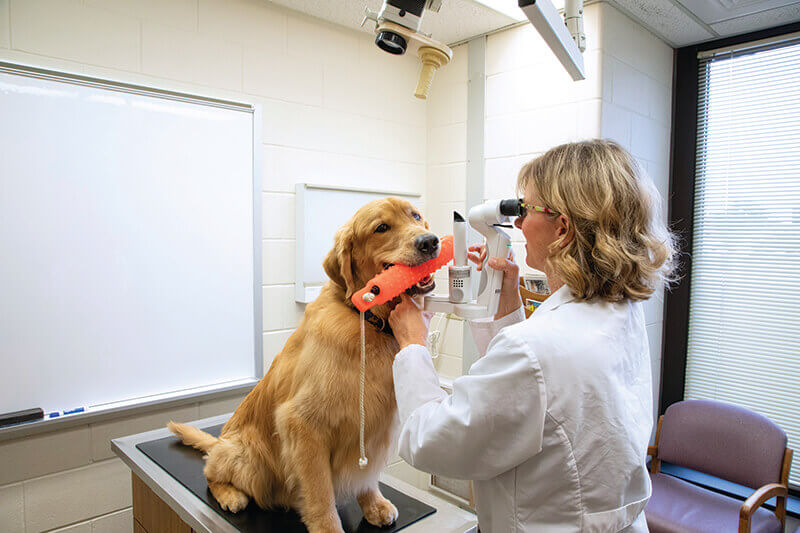 WEST LAFAYETTE, Ind. — At least 2 billion people around the world have vision problems – but how do you know if and when your pet is struggling with its own eyesight?

Dr. Wendy Townsend, associate professor of ophthalmology in Purdue University’s Department of Veterinary Clinical Sciences, has focused her career and research in veterinary medicine to diagnosing and treating eye conditions in animals.

“The most common question I get is if we fit animals with glasses,” Townsend says. “While that’s not what we do, our goal is to help animals see better and improve their quality of life if they’re having issues.”

Although her patients span across a variety of different species, her research is focused on a particular breed of dog that reigns as one of the most popular dog breeds in America: golden retrievers.

Golden retriever pigmentary uveitis is a disease almost exclusively found in purebred golden retrievers. It’s an inherited form of uveitis – which is defined as inflammation of the uveal tract. The uveal tract includes the iris or the colored part of the eye. And though the disease is inherited, the onset and diagnosis usually occurs when the dogs are older.

The disease can often result in blindness due to cataracts and glaucoma, and there are no current methods to prevent or reverse it. Mild symptoms, such as redness and drainage, usually don’t appear until the dog is around 8 years old and can progress to an advanced stage before dogs see a veterinarian, Townsend says. The disease affects about 10% of senior golden retrievers.

Townsend is leading a study that is trying to identify the gene that causes the disease. If the gene can be identified, the disease can be detected earlier, and breeders will be able to identify which of their dogs might be carriers and how they can keep the disease from being passed on to future generations. 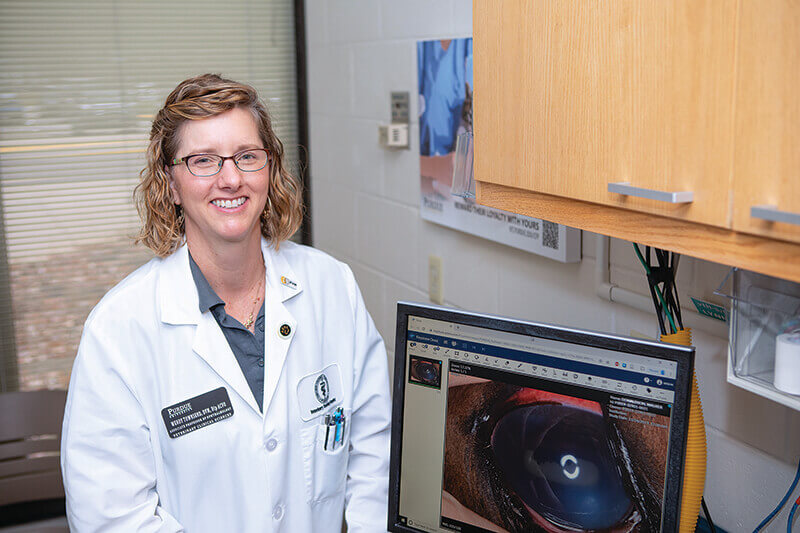 “The problem breeders are facing right now is that even if they’re being responsible and making good decisions, they don’t know their dog is affected,” Townsend says. “They can be several generations down their pedigree before they know there’s a problem.”

Townsend grew up owning golden retrievers and was completing her residency in veterinary ophthalmology when the disease was first recognized.

“It was bizarre because nobody could understand why it was happening in this specific breed,” Townsend says. “But since I loved golden retrievers and had a passion for ophthalmology, it seemed like a natural fit.”

“That becomes a concern because Labrador and golden crosses are frequently used as seeing-eye dogs,” Townsend says.  “And because the disease doesn’t show symptoms until these dogs are older, they could be struggling with their own vision and you might not even know.”

“The earlier you can catch something, the better,” Townsend says. “That goes for all vision problems with any animal.”

As a veterinary ophthalmologist, Townsend says, it’s not uncommon for her to see dogs from across the country affected by golden retriever pigmentary uveitis. In addition to those patients, she commonly sees animals with corneal ulcers (or scratches on the eye), cataracts and glaucoma. Her patients include mostly dogs, horses and cats – but she also has treated penguins, tigers and other exotic species.

Although she doesn’t fit animals with glasses, she has fitted a dog or two with contact lenses; they’re usually dogs that perform in agility and have trouble focusing or struggle with nearsightedness.

“Sometimes animals struggle with the same eye problems that people do. They’re just not as good at telling us when something is wrong,” Townsend says.

Townsend says she is always encouraging pet owners to be cognizant of their pets’ eye health for that very reason. Just because something isn’t blatantly obvious doesn’t mean their eyes are always in perfect health.

“Animals are good at compensating when something isn’t working right. So if one eye is bothering them, they’ll just rely more heavily on the other eye,” Townsend says. “And most of our pets don’t need to have super-sharp vision to lead normal everyday lives. But in some cases – like with dogs that participate in agility – being able to focus both near and far is important.”

As Townsend continues her mission to solve the mystery behind golden retriever pigmentary uveitis – in addition to seeing her patients – she hopes she can build some awareness around the field of ophthalmology.

“The eye might be small, but it’s a powerful organ that we all use and it allows me to work across a wide variety of species,” Townsend says. “I frequently have clients tell me, ‘I had no idea this was an option,’ or, ‘I didn’t know there were eye doctors for dogs.’ The impact this field can have on our patients and their quality of life can be significant.”

Note to Journalists: Photos of Dr. Townsend, including a photo of her with a golden retriever, are available for journalists to use at https://purdue.university/3eO3HEy.