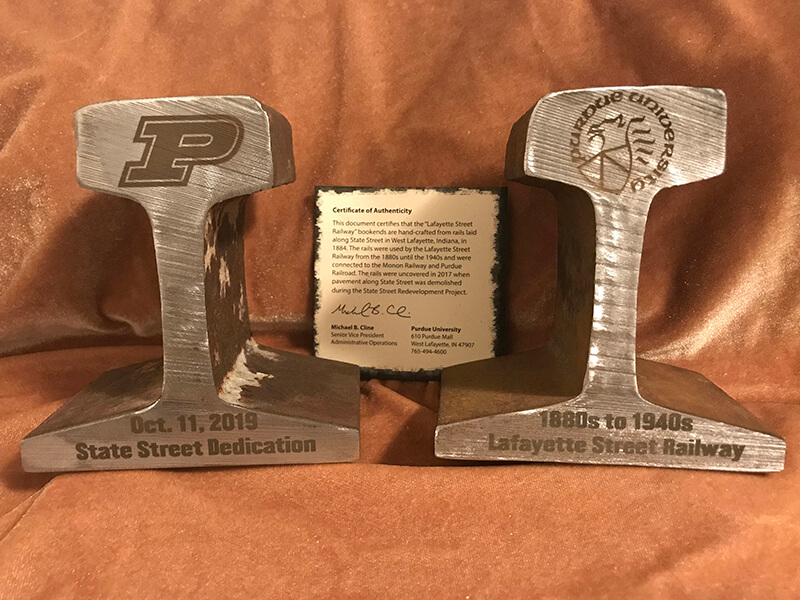 Purdue students in the Bechtel Innovation Design Center engraved cut sections of railway rails used in the Lafayette Street Railway from the 1800s to the 1940s to recognize the historic significance of the rails which were pulled from beneath State Street in 2017. (Cynthia Sequin/Purdue Research Foundation)


WEST LAFAYETTE, Ind. – Buried beneath dirt, brick, asphalt and 100 years of city growth lay train tracks that took countless people between Lafayette and West Lafayette on the Lafayette Street Railway from the 1880s to the 1940s.

In 2017, these steel tracks, believed to be more legend than fact, were discovered and recovered during the State Street Renovation Project, which kicked off the Discovery Park District, a $1 billion-plus transformation on the west side of the Purdue University campus.

Michael B. Cline, the university’s senior vice president for administrative operations,  who oversaw the State Street Redevelopment Project, had as many of the scrap rails as possible pulled from the ground and had some of the best preserved rails cut into 4-inch bookends. That was the first step in telling the historic significance of the rails.

“The students did a great job with the engraving of the rails and really captured the essence of what the rails meant to the past of the greater Lafayette area,” Cline said. 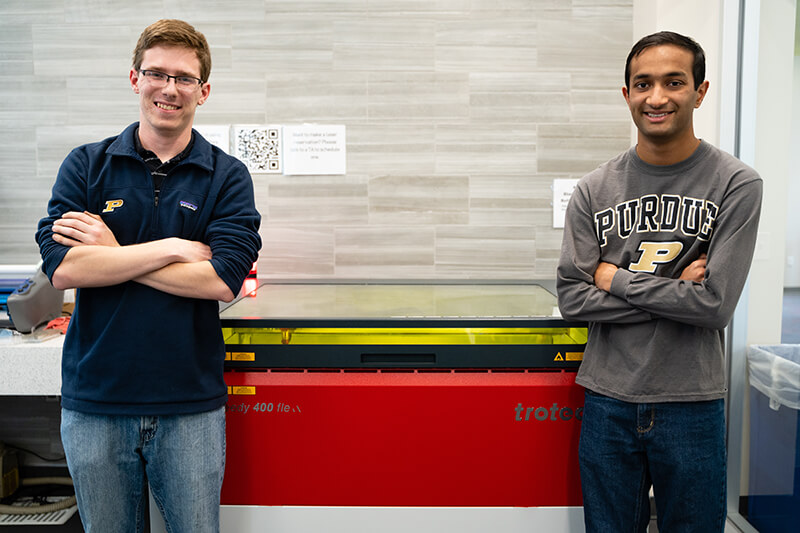 Using new laser engraving technology at the Bechtel Innovation Design Center, Purdue students Shiv Patel, a sophomore in the Weldon School of Biomedical Engineering, and Matthew Fitzgerald, a senior in the Purdue Polytechnic Institute, engraved the cut sections of the railways with the Motion P and the Griffin — both Purdue emblems — and the name of the Lafayette Street Railway system with its years of use. A certificate of authenticity fills in additional details. A video of the Lafayette Street Railway can be viewed here.

The laser engraver used precise dimensions that were uploaded into a computer by the students, who then had to secure the rail bookends on the machine so the engraver could melt the steel into the selected designs.

“Having the responsibility, experience and exposure to this technology as a college student is something unique to Purdue,” Patel said. “Working in and being part of the Bechtel center has many benefits because we get to be a part of students’ innovations and creations and also get to participate in unique projects like this for Purdue.” 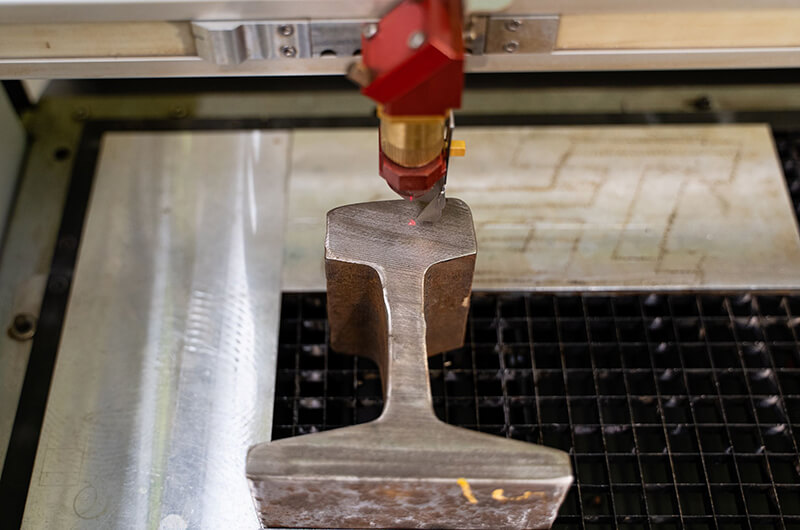 A set of the Lafayette Street Railway System bookends are on display at the Bechtel Innovation Design Center.

The center’s director, Matthew Swabey, said this project is one of many that the students do in the center.

“I’m always impressed by the talent and ingenuity that the students involved in the center exhibit,” he said. “On a daily basis, students create advanced prototypes, 3D printing, machining and laser cutting and engraving in the center.”

Any Purdue student can use the state-of-the-art technology at the Bechtel Innovation Design Center. Since opening in 2017, the center has served 3,887 different students and averages 132 new weekly signups during each semester. In addition, the number of student employees is 34. Students use the center to create advanced prototypes for personal and academic uses.