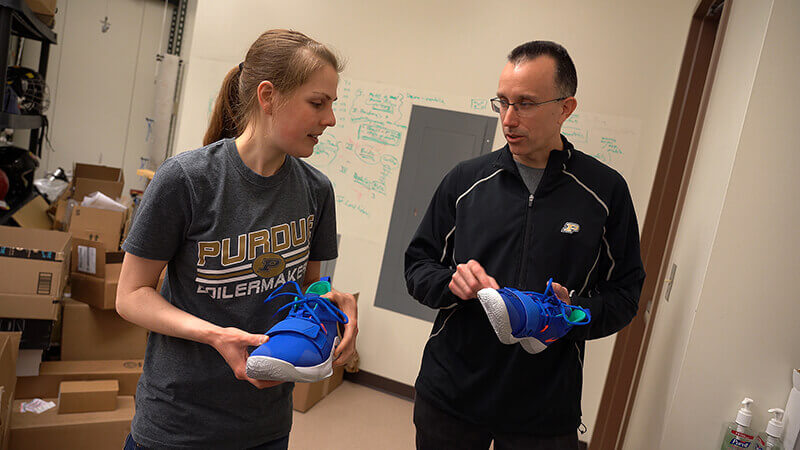 
WEST LAFAYETTE, Ind. —Purdue University will create a sports engineering and research center named in honor of a record-setting Olympian and Purdue graduate.

The Ray Ewry Sports Engineering Center was announced Saturday (Oct. 12) during the university’s Homecoming football game. This announcement was made during the grand finale of the university’s 150th anniversary and its Giant Leaps campaign, which focused on asking the big questions and working toward solutions.

The College of Engineering will advance research and learning benefits to athletes and students through the sports engineering center, named for the Boilermaker track and field athlete who won 10 gold medals in four Olympic Games from 1900 and 1908.

“Boilermakers are inspired by Ray Ewry, who, in trying to take small steps, made the winningest giant leaps in history,” said Mung Chiang, the John A. Edwardson Dean of the College of Engineering. “We are excited about this unique collaboration between Athletics and Engineering at Purdue.”

During Saturday’s game, which was attended by Christophe Dubi, the Olympic Games executive director, Purdue also announced a collaboration with the International Olympic Committee (IOC) starting in 2020. Purdue and the IOC will work on the development of a bimonthly sports information report, which will highlight and distribute details about the latest technologies impacting sport globally, with topics including fan engagement, integrity and health.

This will be a resource for engineering and athletic insight on current issues raised by the IOC, sports governing bodies, athletes and the wider industry. Further collaboration between IOC and Purdue also is in discussion.

“Purdue University and the state of Indiana have a long tradition of upholding excellence in sport,” said Jan-Anders Mansson, director of the center and a Purdue Distinguished Professor of Chemical and Materials Engineering. “A collaboration between Purdue and the IOC demonstrates both institutions’ willingness to promote the highest value of sports for the athletes and will help a healthy future for the next generation of elite athletes.”

“We are pleased to be collaborating with Purdue University,” Dubi said. “As the IOC continues to evolve and develop the Olympic Games, Purdue’s expertise in science and technology will be a valuable support to our work.”

The Ray Ewry Sports Engineering Center, led by Purdue’s Department of Intercollegiate Athletics and the College of Engineering, will develop cutting-edge technology to reduce athletes’ injuries, improve performance, advance rehabilitation techniques, enhance the fan experience and promote fairness and integrity with support of the latest in digital execution systems.

The center is intended to reflect the passion that Ewry, a mechanical engineering undergraduate and graduate student, had for engineering and athletics. Despite suffering from polio and being confined to a wheelchair at 7 years old, Ewry earned 10 Olympic golds competing in the standing long and high jumps, and standing triple jump. His record for gold medals lasted more than a century.

“Purdue Athletics is pleased to collaborate with the College of Engineering in the establishment of the Ray Ewry Sports Engineering Center,” he said. “The center will provide additional focus and energy in support of the significant work already being done by our engineering faculty in the areas of athletic performance, athlete safety and the optimization of data science and technology.”

Purdue was well represented by both U.S. and international athletes in the 2016 Summer Olympics in Rio. The field featured a school-record eight Olympians who once were Purdue athletes, including the university’s first-ever female gold medalist and the first-ever female three-time Olympic qualifier.

Ewry’s grandson, Thomas Carson, was present for Saturday’s announcement and glad to be on the Purdue campus.

“My whole family is over-the-moon excited that Ray is being honored once again by his alma mater,” he said.