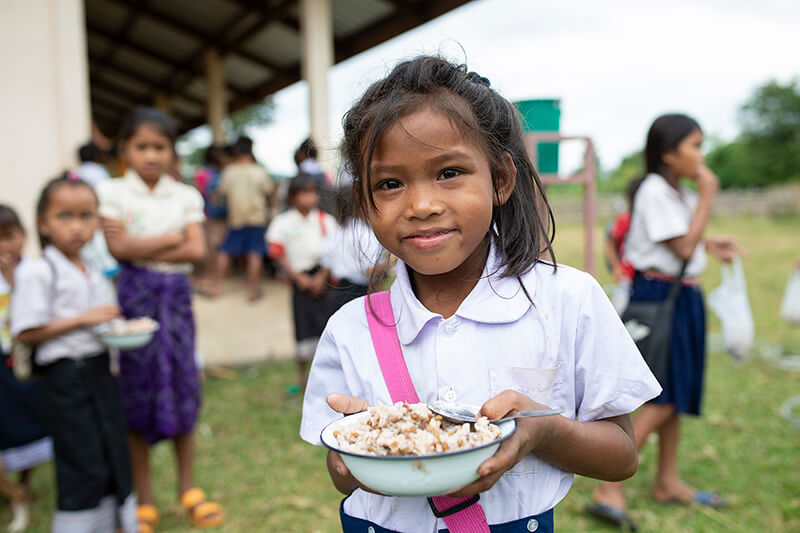 Children eat lunch at a school in Laos. Schools in rural areas have struggled with enrollment and consistent attendance as parents keep children home to help with household chores and agriculture work. USDA Food for Education and Catholic Relief Services provide lunches for primary school children in 350 schools to encourage attendance and enrollment. A Purdue University-led project will seek to alleviate malnutrition in Laos by helping the country strengthen its research capabilities. (Catholic Relief Services photo/Phoonsab Thevongsa)


WEST LAFAYETTE, Ind. – A four-year project will seek to alleviate malnutrition in the Lao People's Democratic Republic by helping to strengthen its research capabilities. The project is being supported by USAID's (the United States Agency for International Development) Long-Term Assistance and Services for Research (LASER) Partners for University Led Solutions Engine (PULSE) consortium.

The initiative will be led by Purdue University's College of Agriculture and College of Health and Human Sciences, which will team up with Catholic Relief Services and Indiana University. The team will work with the Lao Ministry of Health to bolster research capacity in various areas related to food security and human nutrition.

"Relatively few American universities are working in Laos, and we are extremely pleased to be partnering with USAID on this important initiative to strengthen research capacity there," said Gerald Shively, associate dean in Purdue's College of Agriculture and director of International Programs in Agriculture. "This is an investment in the future of Laos and in Purdue's engagement efforts in Asia."

Located between Vietnam and Thailand, Laos has a population of roughly 6.8 million. While the percentage of those suffering malnutrition has dramatically dropped since 1990, there are still significant levels of hunger — and children are particularly affected.

According to the United Nations, only 5% of children under age 5 in Laos have a minimum acceptable diet. That dietary gap led to 33% percent of children in that age group suffering from stunting (low height for their age), while more than 25% were underweight.

Shively, who is the project's principal investigator, will work with Holly Cantuba, country representative in Laos for Catholic Relief Services; Teshome Alemneh, Indiana University's associate vice president for international research and development; and Michele Forman, distinguished professor of nutrition science at Purdue. Catholic Relief Services has implemented education, disability and health projects in Laos for 25 years and brings to the project a strong working relationship with the Lao government.

Shively said the project's first year, which began in October, will involve intensive planning and work with the Ministry of Health, universities and other stakeholders in Laos. The initial goal is to learn more about local research capacity and needs and to establish a better understanding of government priorities. The remaining three years will focus on building local research capacity. As envisioned, the project will help to develop a center of excellence for scientific research and innovation to facilitate academic exchanges, research and learning.

"USAID has made a strong commitment to helping the Lao government strengthen research capacity, and there are numerous areas for attention that leverage Purdue’s expertise, ranging from improving nutritional awareness and education to enhancing food safety," Shively said. "In order to ensure the success of the project in addressing challenges, we will be working closely with the government and other partners to identify priorities for action."

The Laos project will be conducted under the umbrella of the LASER PULSE consortium. Led by Purdue, the goal of the $70 million, five-year cooperative agreement is to deliver practical, research-driven solutions to global development challenges within USAID's operating countries. The supporting consortium partners are Indiana University, the University of Notre Dame, Catholic Relief Services and Makerere University in Uganda.