The center of tornado activity is shifting. These researchers want to know why. 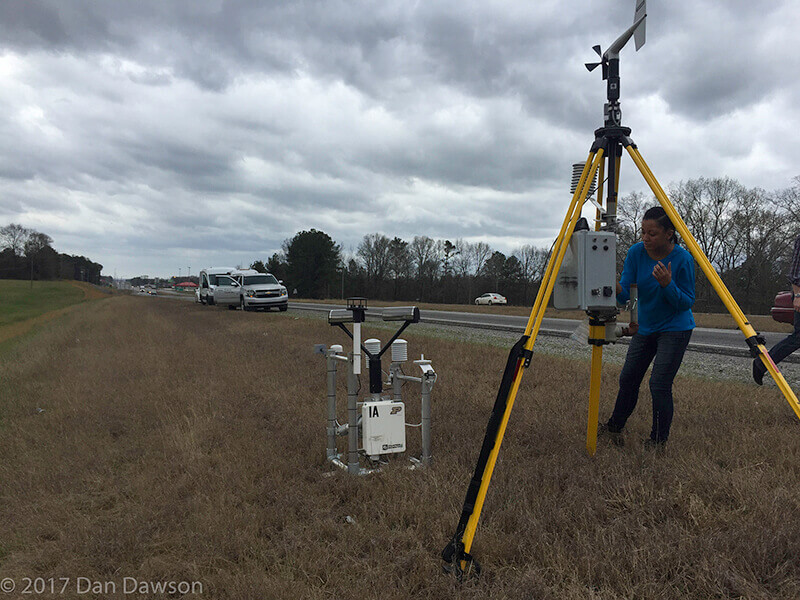 A team member sets up to track severe weather activity. VORTEX Southeast is an effort to understand how environmental factors characteristic of the southeastern U.S. affect the formation, intensity and path of tornadoes in the region. (Purdue University photo/Dan Dawson) Download image

WEST LAFAYETTE, Ind. — Tornado season, which generally spans from March to June in the United States, is upon us. There have been more than 130 reports of tornadoes across the country in the last five days, and earlier this year, 23 people were killed in a cluster of tornadoes near the border of Georgia and Alabama. Although tornado deaths have been on the decline thanks to advances in scientific understanding of the storms and better warning systems, there’s still a lot scientists don’t know.

2011 was an especially deadly year for tornadoes. After nearly 1,700 storms killed 553 Americans in a single season, Congress decided to fund research efforts to help scientists better understand them. VORTEX Southeast, a project to study how environmental characteristics of the southeastern U.S. affect the formation, intensity, structure and path of tornadoes in the region, is one such effort.

Tornado Alley, which spans from Nebraska to Texas, is widely recognized as being the epicenter of tornado activity in the U.S. However, recent studies show it could be shifting.

A 2016 study published in the Journal of Applied Meteorology and Climatology shows that from 1954 to 1983, the center of tornado activity was between southeastern Oklahoma and northeastern Texas. By 2013, it had shifted to northern Alabama.

Deaths from tornadoes in the southeastern U.S. are disproportionately common compared to elsewhere in the country. Researchers believe this might be due to storms happening before the peak of tornado season, when they typically move more quickly. Other explanations could include bad storm visibility, inadequate shelter and higher population density in southern states.

During the spring of 2016 and 2017, Purdue researchers chased storms in northern Alabama as part of the VORTEX Southeast project. In collaboration with researchers from the University of Massachusetts and the University of Oklahoma, they used mobile radars to sample storms that passed within 60 kilometers (about 37 miles) from their site. They also used instrumented probes with laser disdrometers to measure rain drop size distributions, wind, pressure, temperature and humidity.

There are several questions about tornadoes in the Southeast the researchers want to answer. How do the environmental conditions that allow tornadoes to form in the Southeast compare to those in the traditional tornado alley? How are the storms that produce tornadoes affected by terrain, especially that of the Appalachian Mountains? How can forecasting and warnings be improved?

“Most tornadoes, especially strong ones, are produced by a type of thunderstorm known as a ‘supercell,’” said Dan Dawson, an assistant professor of earth, atmospheric and planetary sciences at Purdue. “Some evidence suggests that tornadoes in the Southeast, while also often occurring in supercells, are produced more often than elsewhere from non-supercell storms. We hope to learn more about the nature of the formation processes for these tornadoes and how they differ from their supercell counterparts.”

After collecting data for two seasons, the Purdue team, comprised of Dawson, Ernest Agee, Michael Baldwin, Dan Chavas and Robin Tanamachi, is stepping back to dig through what they’ve found. And they’re starting to uncover some answers.

One paper on the topic has been published, although it’s based on historical data and not direct observations from the last two years. However, it does help answer some of the questions the researchers are trying to answer.

The study looked at how small-scale terrain variability, such as hills, affect tornadoes in Arkansas. Arkansas is a good place to try to answer such a question because it’s absent of mountains but home to a wide range of other, smaller scale topographical features. Using empirical data from 1955 to 2015, the researchers found that tornadoes are impeded by hills. The findings were published in the Journal of Applied Meteorology and Climatology.

“If hills are affecting tornadoes, are they interfering with them directly, on a physical level? Or are the storms that tornadoes form from, which occur on a slightly larger scale, not likely to form in areas with a lot of terrain variability?” asked Chavas, who led the study. “We found that this phenomenon is occurring on a really small scale, so the tornado is being directly affected by the terrain.”

The group has several papers in preparation and under review. Funding for VORTEX-SE is provided by the NOAA National Severe Storms Laboratory.