Updates for Purdue’s Apollo 11 celebration, including information about Saturday’s heat 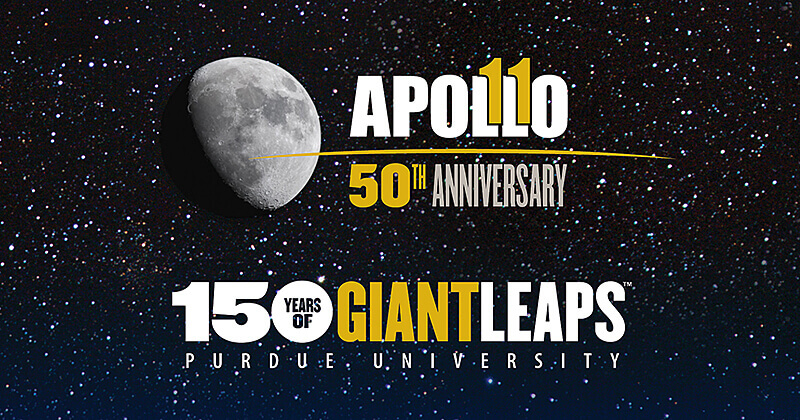 Purdue, known as the “Cradle of Astronauts,” will celebrate the 50th anniversary of the Apollo 11 moon landing with a series of events July 18-20. (Purdue University image). Download image

The F100-F flyover will pass Neil Armstrong Hall twice at approximately 4:30 p.m. Also, at 4:17 p.m. air cannons will go off to commemorate the moment that Apollo 11 landed on the moon.

These events are taking place Thursday-Saturday (July 18-20) to commemorate when Purdue alumnus Neil Armstrong became the first man to set foot on the moon July 20, 1969, and said the historic phrase, “That’s one small step for a man, one giant leap for mankind.” Armstrong’s historic moment is the theme for Purdue’s Giant Leaps Sesquicentennial Campaign. The 150th anniversary celebration of Purdue will conclude with an astronaut reunion at Homecoming on Oct. 12. Also, here is a video and a photo gallery about Armstrong’s legacy. A special Purdue video also will be air this weekend on NASA TV and online.

Because of Saturday’s projected high temperatures, water stations will be near Neil Armstrong Hall, Elliott Hall of Music and Stewart Center. Food trucks also will be selling beverages. Neil Armstrong Hall will be open throughout the day if people need to cool off.

Below is the public event list for Thursday-Saturday (July 18-20). The Northwestern Avenue and University Street parking garages are free and open to the public on weekends and after 5 p.m. on weekdays. The Grant Street garage is paid parking at all times, and a campus map is available here.

* College of Engineering is kicking off Purdue’s Apollo 11 celebration with a special space announcement at 1 p.m. in Neil Armstrong Hall’s Kurz Atrium. The event is open to the public.

* Apollo 11 flight director Gene Kranz presents “Go or No-Go: The Untold Story of the Apollo 11 Moon Landing.” The event will take place at 3 p.m. and the event is sold out. A livestream of the talk will be shared in two overflow rooms – Wetherill Laboratory of Chemistry, Room 200 and Wilmeth Active Learning Center, Hiler Theater (Room 1055). Doors will open at 2:30 p.m. No ticket is required and seating will be first come, first served.

* Representatives from the National Space Council Users Advisory Group will participate in a public panel, “Some of the Many Dimensions of Space: Exploration, Commercial and National Security,” at 7 p.m. in Stewart Center’s Fowler Hall. The event is free, but a ticket is required. The panelists are Admiral James Ellis Jr., retired four-star admiral and former head of STRATCOM; Dr. David Wolf, BSEE and four-time shuttle astronaut; Mary Lynne Dittmar, president and CEO of The Coalition for Deep Space Exploration; and Mandy Vaughn, president at VOX Space. Related news release available online.

* Purdue Apollo 11 themed merchandise is available Thursday-Saturday (July 18-20) at the Purdue Team Store in the Purdue Memorial Union and at Ross-Ade Stadium. The merchandise also will be available online at Purdueteamstore.com.

10 a.m. to 4:30 p.m., is an open house for the special exhibition “Apollo in the Archives: Selection from the Neil A. Armstrong Papers.” The archives can be accessed through Humanities, Social Sciences and Education Library in Stewart Center. The exhibition includes key Apollo 11 mission documents and artifacts from Armstrong’s personal papers. Open house activities for kids of all ages will include exhibition scavenger hunts and viewing of Apollo 11 World Tour rare film clips. Popcorn and light refreshments will be provided. More information about the exhibition is available here.

* 1-3 p.m. Neil Armstrong Hall, Kurz Atrium. The Spirit of Apollo 11 Innovation Showcase will honor the notion of “doing something that's never been done before,” by showcasing the student startup teams who recently completed Purdue Foundry Firestarter alongside other great aerospace innovators like David A. Spencer, associate professor in the School of Aeronautics and Astronautics and director of the Space Flight Projects Laboratory. Some examples of recent graduates’ ideas include flying cars, soybean windshield wiper fluid, digital airline food service and consumer physical tracking in retail spaces. There will be free food and giveaways, and more information is available online.

* 9 a.m. to noon, “Apollo in the Archives: Selection from the Neil A. Armstrong Papers” can be accessed through Humanities, Social Sciences and Education Library in Stewart Center.

* Noon to 1 p.m. Lobby of Loeb Playhouse in Stewart Center. Space author meet and greet. Featuring George Leopold, author of “Calculated Risk: The Supersonic Life and Times of Gus Grissom"; John Norberg, co-author of “Spacewalker"; Susan Gunderson, co-author of “Becoming a Spacewalker"; and Tim Harmon, “No Second Chance.” Books will be available on site for purchase. Cash or check preferred for book purchases.

* Noon to 4 p.m. North side of Memorial Mall. Food station. Round Barn Creamery will be providing a special Apollo 50 anniversary ice cream for purchase. The Daily Bite food truck also will be available until 2 p.m.

* Noon to 4 p.m. Kurz Atrium in Neil Armstrong Hall and at the Purdue Mall fountain, K-12 STEM activities. Become a lunar scientist and journey to the moon. Look up close at lunar samples collected by Apollo astronauts, make your own impact craters on the surface of the moon, and explore the Apollo 11 command module in augmented reality. You can also test your knowledge of the Earth-moon system by creating scale models and learn about the history and future of lunar science and exploration. How did Neil Armstrong, Buzz Aldrin and Michael Collins get to the moon 50 years ago? Learn about the incredible technology that enabled humans to reach for the stars and children can build their own rockets. K-12 students can learn about the different roles that communication plays in exploration and discovery with three hands-on activities that will sharpen their own communication skills. Students will also get a chance to work with a science communication expert to record and star in their own STEM COM video. Make sure to visit the moon rock and Mars meteorite display inside Neil Armstrong Hall. Department of Earth, Atmospheric and Planetary Sciences; the School of Aeronautics and Astronautics; and the Brian Lamb School of Communication.

* 3:30-4:30 p.m. Neil Armstrong Hall of Engineering. Lunar Module Landing Celebration. The celebration will feature a multimedia tribute and a flyover by an F-100.

* 50th anniversary tours on mobile applications – In honor of the 50th anniversary of the lunar landing the university has produced an Apollo 11 virtual tour feature within the Purdue campus tour app. The app is free to download for iOS from Apple’s App Store, or for Android from the Google Play Store.

Note to Journalists: No video or audio recordings permitted at the Gene Kranz talk. Photographs may be taken the first five minutes of Kranz’s presentation. Any reporters who are interested in attending the event in person should contact Amy Patterson Neubert, 765-494-9723, apatterson@purdue.edu. No public livestream will be available.