WEST LAFAYETTE, Ind. – Every person in the U.S. will experience, on average, two broken bones in their lifetime.

It is expected that more than 6.3 million bones will be broken in the U.S. this year, according to the National Institutes of Health. Average recovery time for a young, healthy adult with a broken arm is six to eight weeks.

Average recovery time for a fractured hip for someone 55 or older is much more serious. Recovery can take six months to a year. One out of three will die due to complications within one year, and for those surviving only 50 percent will regain full mobility within a year, the NIH reports.

Hip fractures are expected to climb by 160 percent to 500,000 fractures annually by 2040. Costs of treating fractured hips continues to skyrocket. Medicare alone paid $31 billion in hip fracture treatment in 2015. 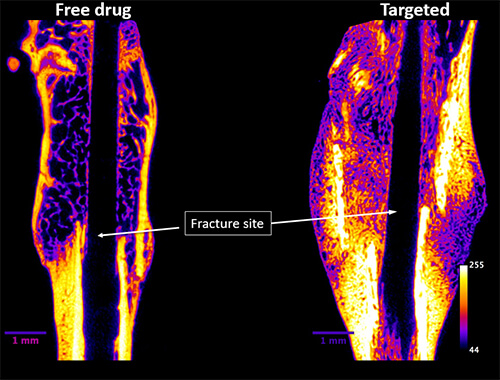 A new injectable bone healing drug could change the treatment of breaks, fractures and weak bones. The drug has been shown to reduce fracture healing time by 50 percent and reduce side effects. Costs and recovery times are expected to reduce at about the same rate with the novel drug.

“Most of us can relate to the discomfort and problems that arise from a bone fracture. If you are expected to have a cast on for 12 weeks, we want to cut that down to six weeks,” said Stewart Low, a visiting scholar in Purdue’s Department of Chemistry who helped develop the technology. “If you have to have your jaw wired shut for two months, our goal is to reduce the time to one month. If you are told that your fracture has a 30 percent chance it won’t heal, our goal is to reduce that to 15 percent.”

The Orthopaedic Research Society awarded Novosteo Inc., the startup developing the new bone treatment, with a first-place award for its work in bone repair during the society’s 2019 annual meeting, held Feb. 2-5 in Austin, Texas.

Click here to view a video about the Novosteo technology.

“There is a lot of interest in this drug from orthopedic surgeons because they currently have very few options for treatment of difficult-to-heal bone fractures such as those that can occur in elderly populations,” Stewart Low said. “Our motivation is to shorten the time people have to suffer through bone fractures. We are very excited to move these discoveries into the clinic.”

The injectable drug goes directly to site of the fracture and attaches itself to the bone without the need for invasive surgery to treat fracture directly on the bone.

“The ability of the fracture homing drug to attach itself specifically to the site of a bone fracture is the primary attribute that distinguishes this technology from all other fracture treatments,” Philip Low said. “The only clinically approved bone fracture healing drug available now must be applied topically during surgery, where the drug is ‘painted’ directly onto the broken bone. Our drug does not require this invasive procedure, but can be injected subcutaneously anywhere on the body even several days after the injury.”

Novosteo is already looking at using the injectable targeted drug for other future uses including dental implants, head and facial fractures, hip and knee replacements and complicated hard-to-heal nonunion or complex fractures.

The technology aligns with Purdue's Giant Leaps celebration, recognizing the university’s global advancements made in health, space, artificial intelligence and sustainability as part of Purdue’s 150th anniversary. Those are the four themes of the yearlong celebration’s Ideas Festival, designed to showcase Purdue as an intellectual center solving real-world issues.

Novosteo was founded to reduce the morbidity, mortality and loss of productivity associated with bone fractures. Based on discoveries of agents that accelerate bone regeneration and breakthroughs in methods to target these agents selectively to fracture surfaces, Novosteo has designed a series of fracture-targeted drugs that concentrate a drug's healing power specifically at the fracture site, thereby greatly accelerating and improving the healing process. The mission of Novosteo is to reduce the debilitating and often life-threatening effects of bone fractures.

About National Institutes of Health

As part of the U.S. Department of Health and Human Sciences, NIH is the largest biomedical research agency in the world. Research reported in this news release was supported by the National Institute of Dental and Craniofacial Research of the N under Award Number R44DE028713. The content is solely the responsibility of the authors and does not necessarily represent the official views of the National Institutes of Health.