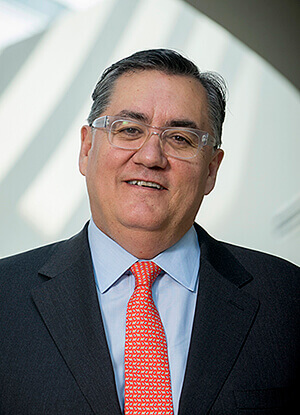 WHAT: The United States is in a new arms race with Russia and China; the Pentagon just released (Feb. 12) its report "Harnessing AI to Advance our Security and Prosperity." Earlier this week (Feb. 11), President Donald Trump signed an executive order, "Maintaining American Leadership in Artificial Intelligence," which calls for a variety of actions in the federal government to make AI research and education a priority.

EXPERT: Tomás Díaz de la Rubia, vice president for Purdue University’s Discovery Park, is an expert in emerging technologies, including AI and quantum information systems. A recent editorial (Feb. 11) in the magazine National Defense explained the need for research in AI for national defense. He was also a speaker at a May 2018 White House summit, "Artificial Intelligence for American Industry."

QUOTE from de la Rubia: "We live today again in a world of great power competition. Those groups and nations that innovate most effectively and dominate the AI technology landscape will not only control commercial markets but will also hold a very significant advantage in future warfare and defense. In many respects, the threat of AI-based weapons is perhaps as existential a threat to the future national security of the United States and its allies as nuclear weapons were at the end of World War II."

More information: In addition to overseeing the multidisciplinary research at Purdue's Discovery Park (which includes the Institute for Global Security and Defense Innovation), Tomás Díaz de la Rubia is a member of the National Academies of Sciences, Engineering and Medicine’s Intelligence Community Studies Board, which discusses science and technology issues of importance to the nation's intelligence community. He formerly was the chief research officer and deputy laboratory director for science and technology at the Lawrence Livermore National Laboratory in California.