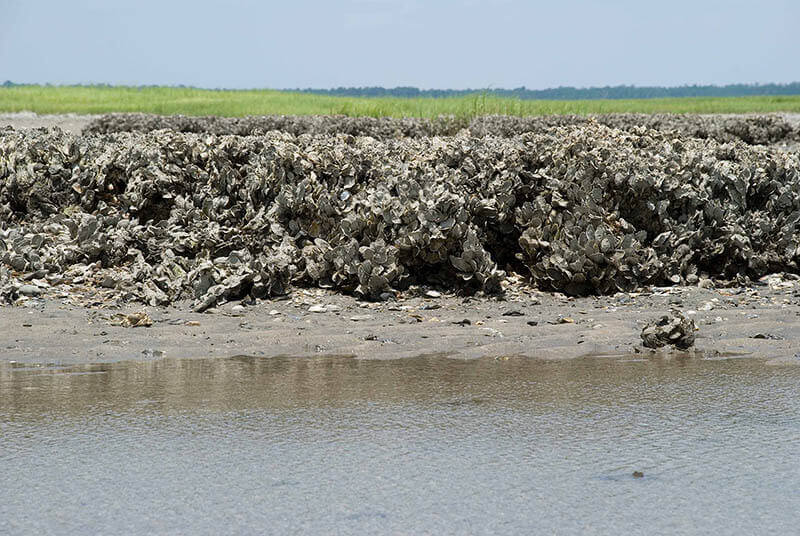 At a reef in South Carolina, the top animals are living and bonded to the remaining shells and cement of prior generations.

WEST LAFAYETTE, Ind. — Oysters build extensive reef communities by cementing to one another early in their lives. Scientists have known they secrete an adhesive for this purpose, but new research shows the glue they make as babies and juveniles are entirely different substances.

When microscopic oyster larvae decide where they want to live forever, they stick out a tiny foot and attach to a surface. Within minutes to hours, they start laying down an adhesive. In terms of chemistry, this is an organic, hydrated material.

“It’s basically a premade goop that they have ready to go,” said Jonathan Wilker, a professor of chemistry and materials engineering at Purdue University. “When they find a place they want to stay, that is where they shoot it onto.”

Within 48 hours of putting their foot down, baby oysters start transitioning from larvae to juveniles. This progression is marked by the secretion of a new adhesive, which comes from between the oyster’s shells, whereas the initial goop came from the foot.

“The larval adhesive is still there, but as the oysters grow out, you start to see this separate adhesive,” Wilker said.

The findings, which were published in the journal ACS Applied Materials & Interfaces, describe the first look at oysters throughout their entire life cycle.

After the first two days, oysters continued to grow and secrete the second-stage glue, which is a composite of organic and inorganic substances. It’s actually 85 percent calcium carbonate (chalk), which is what oyster shells are made of. This is the glue that binds oysters together for life.

By analyzing oyster adhesion throughout their various life stages, Wilker’s team hopes to provide insights for reef restoration and the design of new adhesives. His lab continues to work toward creating underwater adhesives.