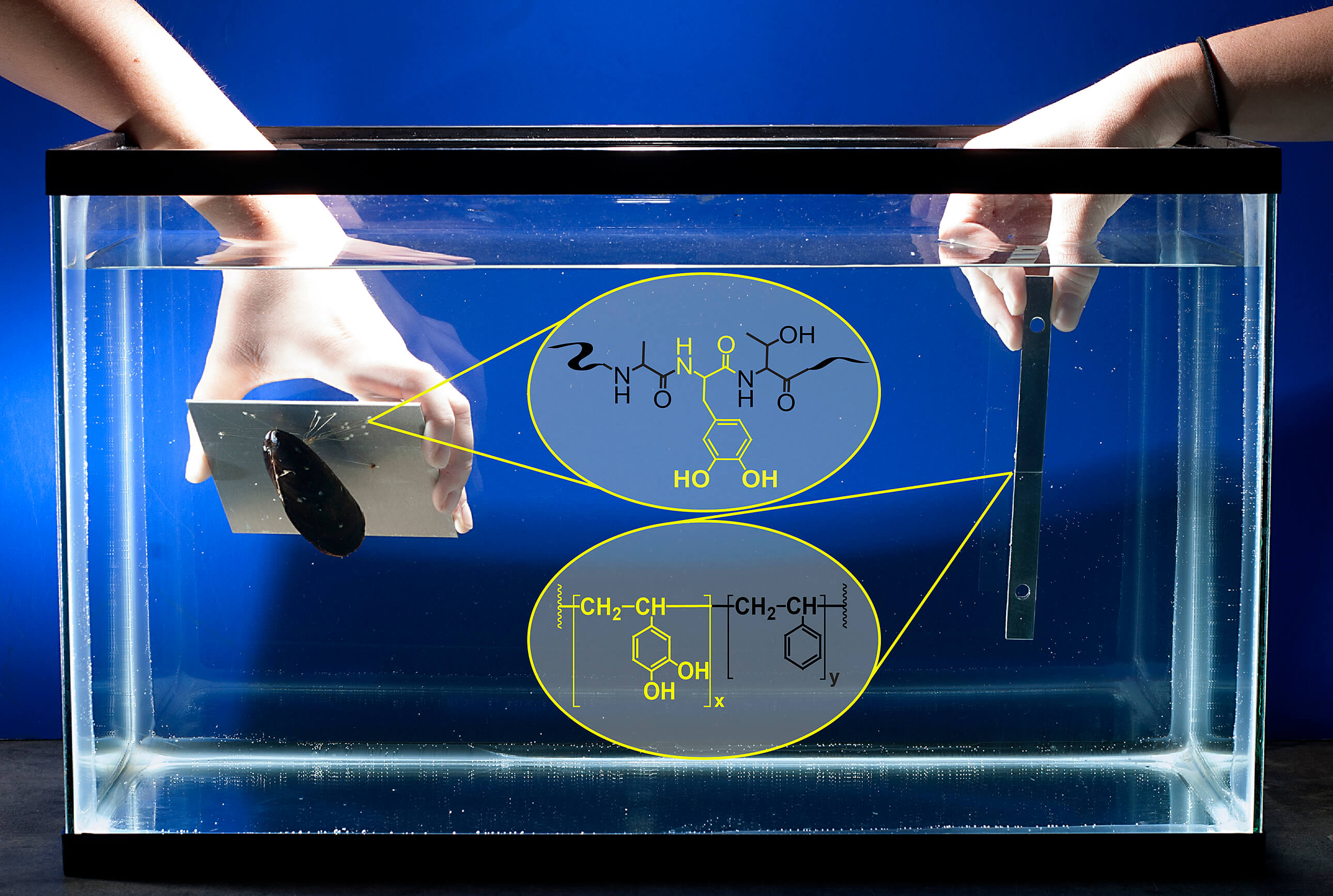 An adhesive that works under water and is modeled after those created by shellfish for sticking to surfaces has been shown to be stronger than many commercial glues. At left, a live mussel uses its natural adhesive when sticking to an aluminum sheet. At right, two pieces of aluminum are bonded together with the new biomimetic polymer modeled after the animal’s adhesive. Also, chemical structures of the mussel protein and the synthetic polymer are shown. (Purdue University photo/Jonathan Wilker)

WEST LAFAYETTE, Ind. – An adhesive that works under water and is modeled after those created by shellfish to stick to surfaces is stronger than many commercial glues created for the purpose.

“Our current adhesives are terrible at wet bonding, yet marine biology solved this problem eons ago,” said Jonathan Wilker, a professor of chemistry and materials engineering at Purdue University. “Mussels, barnacles, and oysters attach to rocks with apparent ease. In order to develop new materials able to bind within harsh environments, we made a biomimetic polymer that is modeled after the adhesive proteins of mussels.”

New findings showed that the bio-based glue performed better than 10 commercial adhesives when used to bond polished aluminum. When compared with the five strongest commercial glues included in the study, the new adhesive performed better when bonding wood, Teflon and polished aluminum. It was the only adhesive of those tested that worked with wood and far out-performed the other adhesives when used to join Teflon.

Findings are detailed in a research paper published online in February and in the March 1 print issue of the journal ACS Applied Materials and Interfaces.

Mussels extend hair-like fibers that attach to surfaces using plaques of adhesive. Proteins in the glue contain the amino acid DOPA, which harbors the chemistry needed to provide strength and adhesion. Purdue researchers have now inserted this chemistry of mussel proteins into a biomimetic polymer called poly(catechol-styrene), creating an adhesive by harnessing the chemistry of compounds called catechols, which are contained in DOPA.

“We are focusing on catechols given that the animals use this type of chemistry so successfully,” Wilker said.  “Poly(catechol-styrene) is looking to be, possibly, one of the strongest underwater adhesives found to date.”

While most adhesives interact with water instead of sticking to surfaces, the catechol groups may have a special talent for “drilling down” through surface waters in order to bind onto surfaces, he said.

The series of underwater bond tests were performed in tanks of artificial seawater. A YouTube video is available at https://youtu.be/rhblikR3SBU.

“These findings are helping to reveal which aspects of mussel adhesion are most important when managing attachment within their wet and salty environment,” Wilker said. “All that is needed for high strength bonding underwater appears to be a catechol-containing polymer.”

Surprisingly, the new adhesive also proved to be about 17 times stronger than the natural adhesive produced by mussels.

“In biomimetics, where you try to make synthetic versions of natural materials and compounds, you almost never can achieve performance as good as the natural system,” Wilker said.

One explanation might be that the animals have evolved to produce adhesives that are only as strong as they need to be for their specific biological requirements. The natural glues might be designed to give way when the animals are hunted by predators, breaking off when pulled from a surface instead of causing injury to internal tissues.

The research paper was authored by former doctoral students Michael A. North and Chelsey A. Del Grosso, who have graduated, and Wilker.

Future research will include work to test the adhesive under real-world conditions.

“We have shown that this adhesive system works quite well within controlled laboratory conditions. In the future we want to move on to more practical applications in the real world,” Wilker said.

The research was funded by the Office of Naval Research.

Note to Journalists: A copy of the research paper is available from Emil Venere, Purdue News Service, at 765-494-4709, venere@purdue.edu, and at http://pubs.acs.org/doi/abs/10.1021/acsami.7b00270. A YouTube video is available at https://youtu.be/rhblikR3SBU. Other multimedia materials are available on Google Drive at https://goo.gl/3szOnW.  The materials were prepared by Erin Easterling, digital producer for the Purdue College of Engineering, 765-496-3388, easterling@purdue.edu

When it comes to underwater adhesion, shellfish are the true experts. Mussels, barnacles, and oysters attach to rocks with apparent ease. Yet our man-made glues often fail when trying to stick in wet environments. Results described herein focus on a copolymer mimic of mussel adhesive proteins, poly(catechol-styrene). Underwater bonding was examined as a function of parameters including polymer molecular weight and composition. In doing so, several surprising results emerged. Poly(catechol-styrene) may be the strongest underwater adhesive found to date. Bonding even exceeded that of the reference biological system, live mussels. Adhesion was also found to be stronger under salt water than deionized water. Such unexpected findings may contradict an earlier proposal in which charged amino acids were suggested to be key for mussel adhesive function. Taken together, these discoveries are helping us to both understand biological adhesion as well as develop new materials with properties not accessed previously.