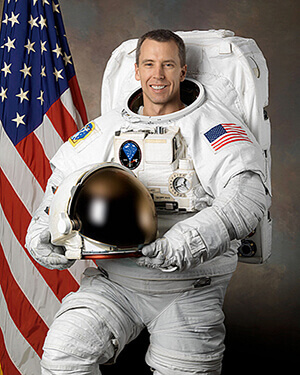 Feustel, a Purdue College of Science graduate (BS ’89, MS ’91) currently stationed aboard the ISS, will receive an honorary Doctor of Science degree via a live link to the ISS during the Friday evening (May 11), ceremony in Purdue’s Elliott Hall of Music. In order to accommodate the timing of available communication with the International Space Station, the Friday night (Division II) commencement ceremony will begin 10 minutes early at 7:20 p.m.

Graduates must arrive at the Armory for check-in by 5:45. Graduates arriving after that time may not be able to participate in Commencement. The procession to Elliott Hall of Music will begin at 6:50.
Ticketed guests must arrive at Elliott Hall of Music by 6:45 p.m. to ensure they are seated before the procession begins. The doors will open for ticketed guests at 5:50 p.m.
During the ceremony, Feustel will also give remarks, which are scheduled to begin at 7:56 p.m.

Ordinarily, a Purdue dean places the ceremonial hood on honorary degree recipients, but for obvious logistical reasons, an exception has been made in this case. Fellow Boilermaker and NASA astronaut Scott Tingle, who is also stationed on the ISS, will stand in and place the hood on Feustel.

NASA will air a portion of the commencement ceremony, including remarks by President Mitch Daniels and the honorary degree conferral, live on NASA TV in a broadcast beginning at approximately 7:35 p.m. at www.nasa.gov/live. All of Purdue’s six commencement ceremonies will be livestreamed in their entirety at http://www.kaltura.com/tiny/3d86e.

“Purdue’s tradition has always required that honorary degree recipients be present at commencement but, given the mission Drew has undertaken on behalf of science and his fellow citizens, our Trustees felt an exception in this case is more than warranted,” said Purdue President Mitch Daniels. “Plus, it will give our graduates an exceptionally fun and unique way to remember their special day.”

Feustel earned a bachelor’s degree in solid earth sciences in the Department of Earth, Atmospheric, and Planetary Sciences in the College of Science and a master’s degree in geophysics from Purdue. He is a veteran of three NASA spaceflights and is currently assigned to Expedition 55/56 aboard the ISS where he and his crewmates are working on about 250 science investigations in fields such as biology, Earth science, human research, physical sciences and technology development.

By the ceremony on May 11, he will have spent a total of 80 days in space, including 51 days in space on this, his third mission, and will have conducted seven spacewalks totaling 48 hours and 28 minutes of spacewalking time. His eighth spacewalk is planned for May 16. He is scheduled to return to Earth in October.

Before joining NASA in 2000, he was a geophysicist for the Engineering Seismology Group in Ontario, Canada, and an exploration geophysicist for Exxon Mobil Exploration Co. His first spaceflight was the STS-125 final mission to the Hubble Space Telescope in 2009, followed by Space Shuttle Endeavor’s final mission to the International Space Station on STS-134, where he served as the lead spacewalker in 2011.

“Drew is an outstanding geoscientist, giving him a unique perspective in viewing Earth from space,” said Patrick J. Wolfe, the Frederick L. Hovde Dean of Science and Miller Family Professor of Statistics. “His exceptional contributions to science and to our nation are an inspiration to future generations of scientists, and to Boilermakers everywhere. We couldn’t be prouder of his achievements, and to claim him as one of our own.”

Note to Journalists: Media interested in covering the event should send requests on company letterhead to Jim Bush, jsbush@purdue.edu, or Tim Doty, doty2@purdue.edu, by Tuesday (May 8). More information is available here.