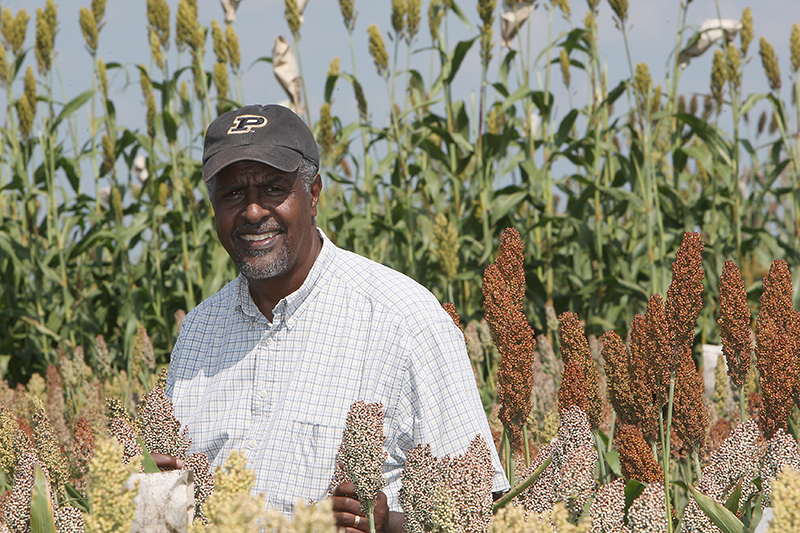 WEST LAFAYETTE, Ind. – Purdue Research Foundation and Purdue University officials on Wednesday, August 23, announced the launch of “Purdue World,” a global project to accelerate its social entrepreneurship programs that can contribute to the welfare and advancement of human societies throughout the world.

“Our focus of Purdue World is to involve students, faculty, alumni and partners across disciplines to help improve the lives of people. As we embarked on this venture, we discovered that Purdue is already doing these things in a very big way, and the creation of Purdue World helps us enhance what is already taking place,” said Ron Ellis, Purdue Foundry general manager of social entrepreneurship and commercialization. “It’s important to keep in mind that entrepreneurship does not need to be profit driven, and Purdue wants to focus on the positive contribution its research can make on people’s lives everywhere.”

A strong example of Purdue’s contribution is demonstrated in the work of Gebisa Ejeta, 2009 World Food Prize Winner and distinguished professor in the Purdue College of Agriculture. Ejeta developed Africa's first hybrid variety of sorghum tolerant to drought. He also discovered the chemical basis of the relationship between the deadly parasitic weed striga and sorghum, and was able to produce sorghum varieties resistant to both drought and striga. Grain sorghum is the fifth most important cereal crop in the world. With its superior drought tolerance and broad adaptation, sorghum is grown worldwide, providing an important food resource for over 500 million people in developing countries. Watch a video interview of Ejeta here.

“At Purdue, we are encouraged to undertake research addressing societal challenges such as food insecurity, both at home and abroad,” said Ejeta, who also is the executive director of the Purdue Center for Global Food Security.

The university also recognizes the importance of social engagement.

“Purdue has a long history of global engagement – outstanding faculty, staff, and students who are working together to improve the quality of life for people around the world,” said Jay Akridge, Purdue interim provost and the former Glenn W. Sample Dean of Agriculture. “The creation of Purdue World will help us expand and deepen our work in social entrepreneurship, and contribute even more to our global society.” 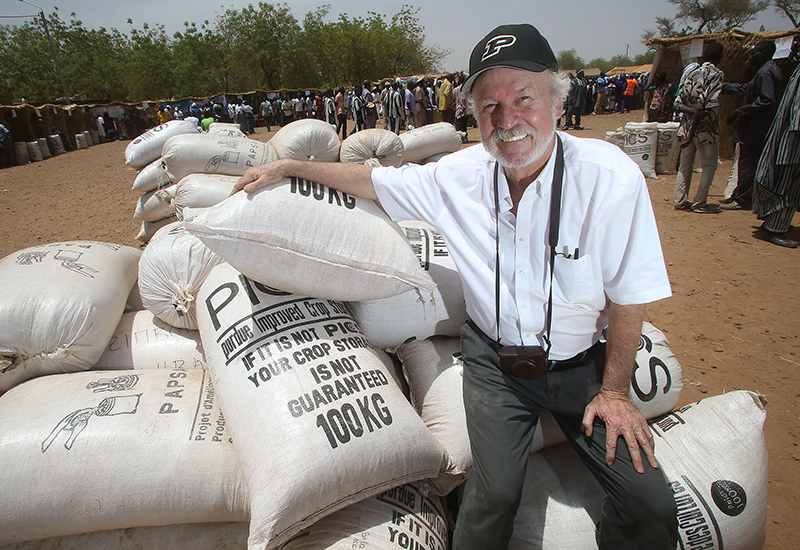 Distinguished professor Larry Murdock with Purdue Improved Crop Storage, or PICS, bags that contain grain used to feed farmers and their families in Burkina Faso, one of the poorest countries in the world. (Purdue University photo) Download image

“We have established programs to support our commercialization and entrepreneurial activities, but we want to increase our advancement of technologies and ideas that have a strong social component,” said Dan Hasler, Purdue chief entrepreneur officer. “We can do this by identifying and supporting innovations that can have a significant impact on people’s lives and create successful, sustainable enterprises – despite the often less exciting financial revenues.”

Several initiatives Purdue is doing to expedite social media innovations to the public include:

• The World Health Organization estimates that in 2015 there were 214 million new cases of malaria, resulting in 438,000 deaths. The majority of cases (65 percent) occur in children under 15 years old. Resistance is now common against most classes of antimalarial drugs. Philip Low, the Ralph C. Corley Distinguished Professor of Chemistry and director of the Purdue Center for Drug Discovery, is developing a new class of therapy that prevents escape of malaria parasite from the red blood cell. By preventing the escape, the malaria parasite cannot spread and dies in a few days. Results have been promising in early clinical studies.

PICS Global is an example of a new Purdue social startup.  Purdue Improved Crop Storage (PICS) bags offer chemical-free, low-cost crop storage that preserve food longer and safely and prevent insect-caused post-harvest losses for farmers in developing countries. The technology received funding from the Bill & Melinda Gates Foundation. More than 10 million bags have been used across the world. PICS Global a social startup with a mission to distribute this technology worldwide. Watch a video about PICS here.

“The PICS project began in the late 1980s after visiting Cameroon, Africa where I became aware of the tremendous post-harvest crop losses that farmers experience,” Murdock said. “The bags we developed to help farmers better preserve their crops will not make a lot of money, but they serve and help millions of people in undeveloped countries and that is the main focus of the work we do.”

Other Purdue startups based on social entrepreneurship include:

Maji Safi International LLC provides a low-cost, low-maintenance slow sand water filter technology to provide better clean and safe drinking water to schools and communities in developing countries around the world. The company is providing its technology in Tanzania with plans to expand to other underdeveloped countries. Watch a video about Maji Safi International here.

SPEAK MODalities developed technology that helps communication and language development for children and families affected by severe, nonverbal autism and developmental disabilities. More than 30,000 youngsters in six countries have been helped by the technology. Watch a video about SPEAK MODalities here.

“We are excited about the potential of Purdue World to make a difference, and anticipate that it will grow and expand at a rapid pace,” Ellis said. “But, we can’t do it alone. We’re seeking help through contributions to the Purdue World Impact Fund. This fund will provide startup capital to qualified new startups to support test market. Donations can be directed to specific areas of interest. In addition, we seek volunteers to serve as mentors mentor to help startups start and grow their business.”