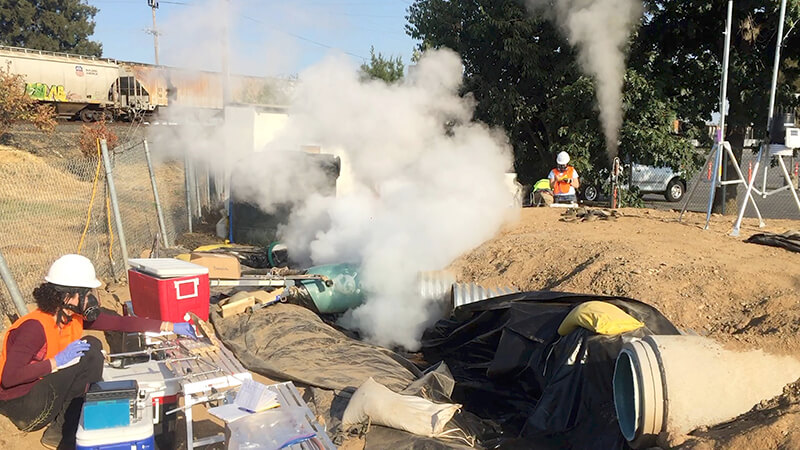 WEST LAFAYETTE, Ind. — New research is calling for immediate safeguards and the study of a widely used method for repairing sewer-, storm-water and drinking-water pipes to understand the potential health and environmental concerns for workers and the public.

The procedure, called cured-in-place pipe repair, or CIPP, was invented in the 1970s. It involves inserting a resin-impregnated fabric tube into a damaged pipe and curing it in place with hot water or pressurized steam, sometimes with ultraviolet light. The result is a new plastic pipe manufactured inside the damaged one. The process can emit chemicals into the air, sometimes in visible plumes, and can expose workers and the public to a mixture of compounds that can pose potential health hazards, said Andrew Whelton, an assistant professor in Purdue University’s Lyles School of Civil Engineering and the Environmental and Ecological Engineering program.

He led a team of researchers who conducted a testing study at seven steam-cured CIPP installations in Indiana and California. The researchers captured the emitted materials and measured their concentration, including styrene, acetone, phenol, phthalates and other volatile (VOC) and semi-volatile organic compounds (SVOC).

Results from their air testing study are detailed in a paper appearing on July 26 in Environmental Science & Technology Letters. The study files can freely be downloaded and are open-access, and the paper is available at http://pubs.acs.org/doi/10.1021/acs.estlett.7b00237.

Findings show that the chemical plume, commonly thought of as harmless steam, was actually a complex mixture of organic vapor, water vapor, particulates of condensable vapor  and partially cured resin, and liquid droplets of water and organic chemicals. A YouTube video is available at https://youtu.be/rBMOoa2XcJI.

“CIPP is the most popular water-pipe rehabilitation technology in the United States,” Whelton said. “Short- and long-term health impacts caused by chemical mixture exposures should be immediately investigated. Workers are a vulnerable population, and understanding exposures and health impacts to the general public is also needed.”

The researchers have briefed the National Institute for Occupational Health and Safety (NIOSH) about their findings. NIOSH is part of the Centers for Disease Control and Prevention and has occupational safety and health experts who can investigate workplace hazards. 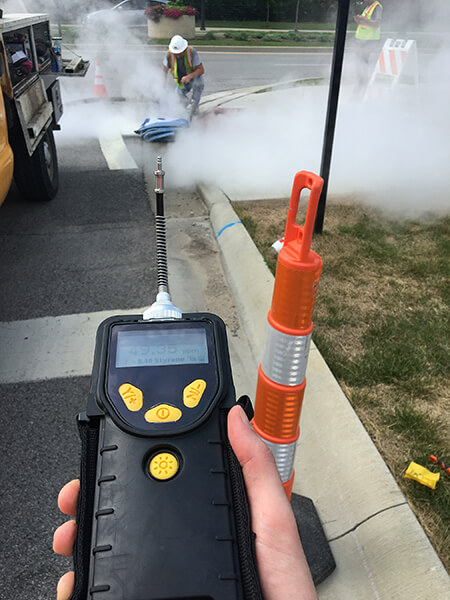 A waxy substance was found in the air, and materials engineers determined it was partially cured plastic, styrene monomer, acetone, and unidentified chemicals.

No respiratory protection was used by CIPP workers, and a review of online videos, images and construction contracts indicates respiratory safety equipment use was not typical, he said.

“This suggests that there are operational conditions that may decrease the potential for hazardous health effects,” Shannahan stated. “Since exposures can be highly variable in chemical composition, concentration, and exposure duration our findings demonstrate the need for further investigation.”

At the same time, existing testing methods are not capable of documenting this multi-phase chemical exposure, Whelton said.

In 2017, Whelton completed a one-and-a-half-day CIPP construction inspector course for consulting and municipal engineers and contractors as part of a different research project working with state transportation agencies.

“CIPP workers, the public, water utilities, and engineers think steam is emitted,” he said. “What we found was not steam. Even when the chemical plume was not visible, our instruments detected that we were being chemically exposed.”

The new research also contains results from the team’s Freedom of Information Act requests to cities and utilites. This information is contained in the supporting-information section of the research paper. Forty-nine public reports of chemical air contamination associated with CIPP activites were found. Complaints filed by homeowners and businesses who, anecdotally, have described strong and lingering chemical odors and illness symptoms, also were described.

Additional research is needed, particularly because the procedure has not been well studied for health and environmental risks, said Howarter.

Whelton said, “In the documents we reviewed, contractors, utilities, and engineering companies have told people who complain about illness symptoms that their exposures are not a health risk. It’s unclear what data are used for these declarations.”

Utilities and municipalities sometimes cite worker chemical exposure standards established by the NIOSH as acceptable for the general public.

“That comparison is wrong and invalid,” Whelton said. “Worker safety exposure standards should not be cited as acceptable exposures for the general public. For example, children have less of an ability to handle a chemical exposure than healthy adults, and worker exposure standards do not account for the multi-phase exposure. CIPP workers can be exposed to more than one chemical at a time, in addition to droplets, vapor and particulates.”

Because of the air testing results obtained at CIPP installations on the Purdue campus – two of the seven test sites studied – Purdue required the faculty and students to better protect themselves from inhaling the chemicals emitted. The researchers were required to wear full-facemask carbon filter respirators during their testing in California.

“Workers should always wear appropriately thick chemically resistant gloves while handling uncured resin tubes,” Whelton said. “No one should handle these materials with their bare hands.”

He said health officials must be alerted when people complain about odors near CIPP sites and illness so they can investigate.

“Health officials we have spoken with were unaware of illness and odor complaints from CIPP activities,” Whelton said. “Local and state health departments should be involved in all public chemical exposure and illness complaints. They are trained on medical assessments.”

Often, the public instead speaks with CIPP contractors and engineers about their illness complaints, which Whelton said must change.

“Engineers should act immediately because it is their professional responsibility to hold paramount the safety, health, and welfare of the public according to their code of ethics,” he said. “We have seen evidence that companies and utilities do not understand what materials are created and emitted by CIPP processes or the consequences of exposure. Our new study indicates workers, the public, and the environment needs to be better protected from harm.”

The researchers are working to develop safeguards, including a new type of handheld analytical device that would quickly indicate whether the air at a worksite is safe. A patent application has been filed through the Purdue Research Foundation’s Office of Technology Commercialization.

The research was primarily funded by a RAPID response grant from the National Science Foundation. Additional support was provided by public donations and from Purdue University.

The study follows a discovery three years ago when researchers reported that chemicals released by CIPP activities into waterways have been linked to fish kills, contaminated drinking water supplies, and negative impacts to wastewater treatment plants. A previous research paper, available at http://pubs.acs.org/doi/abs/10.1021/es5018637,  demonstrated that chemicals released into water by CIPP sites can be toxic, and the CIPP waste dissolved freshwater test organisms within 24 hours at room temperature.

Donations to continue to this research can be made at http://Giving.Purdue.edu/WaterPipeSafety.

Note to Journalists: A copy of the research paper is available the paper is available at http://pubs.acs.org/doi/10.1021/acs.estlett.7b00237 or from Emil Venere at Purdue University, 765-494-4709, venere@purdue.edu. A YouTube video is available at https://youtu.be/rBMOoa2XcJI.  Other multimedia materials are available on Google Drive at https://goo.gl/3KxELV. The materials were prepared by Erin Easterling, digital producer for the Purdue College of Engineering, 765-496-3388, easterling@purdue.edu