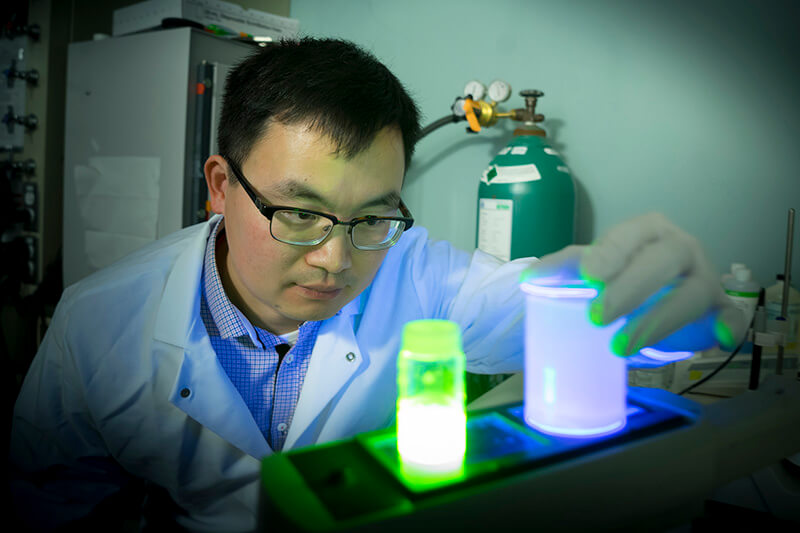 Meng Deng, founder of Adipo Therapeutics and assistant professor in Purdue’s College of Engineering and College of Agriculture, compares two samples in the development of a nanotherapeutic platform that could induce conversion of bad fat to good fat. The company is commercializing the innovation in an effort to provide a safe and effective way to treat obesity and diabetes. Adipo licenses Purdue intellectual property that is protected with a patent from the U.S. Patent and Trademark Office. Purdue University ranked 12th in the world in granted U.S. patents in 2016. (Purdue Research Foundation / Vince Walter image) Download image

WEST LAFAYETTE, Ind. – Purdue University ranked 12th in the world among universities granted U.S. utility patents in 2016, according to a new report released by the National Academy of Inventors (NAI) and the Intellectual Property Owners Association (IPO).

This ranking in patent activity is up from the previous year's spot of 15th. In 2016, Purdue had 105 U.S. utility patents issued.

“This four-year continual increase in patent ranking really reflects our researchers, staff and students’ commitment to improving lives through research and collaborations with private and public entities,” said Suresh Garimella, executive vice president for research and partnerships. “As a major international research institution one of our goals is to ensure a continued focus on moving life-changing innovations to the marketplace and making a difference. We are deeply excited to be recognized in this capacity. ”

The patents issued to Purdue represent innovations from nearly all of the university's core research areas including engineering, agriculture, science, computer science, technology, biomedicine, pharmaceuticals, health sciences, IT and veterinary medicine. Across campus, Purdue has more than 400 research laboratories and 139 research centers and institutes including Purdue's Discovery Park, its hub for interdisciplinary research, and the commercialization activities that take place in the Discovery Park-based Burton D. Morgan Center for Entrepreneurship.

“Each year our team works diligently with Purdue innovators to protect Purdue’s intellectual property and move the technologies to market,” said Brooke Beier, executive director for the Office of Technology Commercialization. “We are thrilled to see the increase in our patent ranking as it reflects the growing number of innovations being developed by the Purdue ecosystem and the potential for these innovations to positively affect the lives of millions around the world.”

The patent activity also is noted in the researchers at Purdue who are members of the National Academy of Inventors. These fellows are:

* Charles A. Bouman, the Showalter Professor of Electrical and Computer Engineering and Biomedical Engineering.

* Philip S. Low, the Ralph C. Corley Distinguished Professor of Chemistry and director of the Purdue Center for Drug Discovery.

The National Academy of Inventors and Intellectual Property Owners Association have published the report annually since 2013. The rankings are compiled by calculating the number of utility patents granted by the U.S. Patent and Trademark Office, which lists a university as the first assignee on the printed patent. The full report of the Top 100 Worldwide Universities Granted Patents in 2016 is available at http://www.academyofinventors.com/pdf/top-100-universities-2016.pdf.

About the National Academy of Inventors

The National Academy of Inventors® is a 501(c)(3) nonprofit member organization comprising U.S. and international universities, and governmental and nonprofit research institutes, with over 3,000 individual inventor members and fellows spanning more than 200 institutions, and growing rapidly. It was founded in 2010 to recognize and encourage inventors with patents issued from the U.S. Patent and Trademark Office, enhance the visibility of academic technology and innovation, encourage the disclosure of intellectual property, educate and mentor innovative students, and translate the inventions of its members to benefit society. The NAI publishes the multidisciplinary journal, Technology and Innovation, Journal of the National Academy of Inventors. www.academyofinventors.org

About the Intellectual Property Owners Association

The Intellectual Property Owners Association, established in 1972, is a trade association for owners of patents, trademarks, copyrights and trade secrets. IPO is the only association in the U.S. that serves all intellectual property owners in all industries and all fields of technology. IPO advocates for effective and affordable IP ownership rights and provides a wide array of services to members, including supporting member interests relating to legislative and international issues; analyzing current IP issues; information and educational services; and disseminating information to the general public on the importance of intellectual property rights. www.ipo.org

Founded in 1869 in West Lafayette, Indiana, Purdue University serves its state as well as the nation and the world. Purdue is a major research institution supported by top-ranking disciplines in pharmacy, business, engineering and agriculture. More than 39,000 students are enrolled here. All 50 states and 130 countries are represented in its student population.