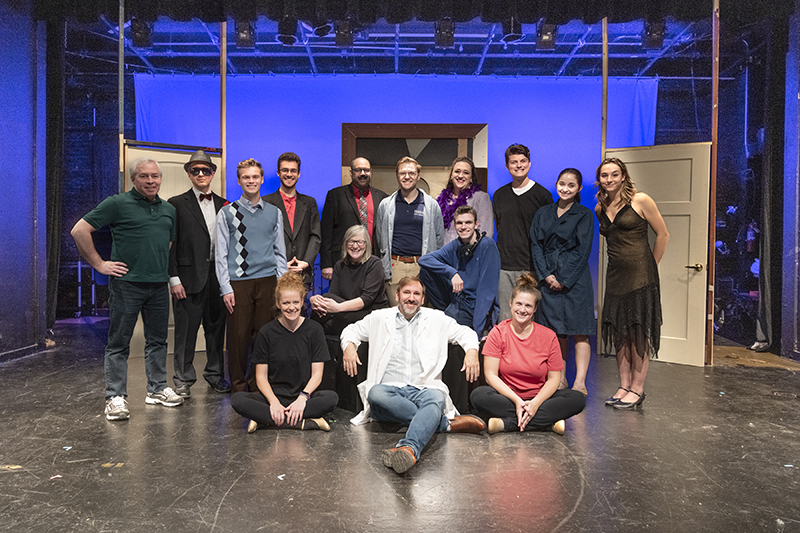 When Allison Russell takes the stage at Lafayette’s Civic Theatre, she’s looking not only to make art, but to show others that art can bring people — and communities — together. 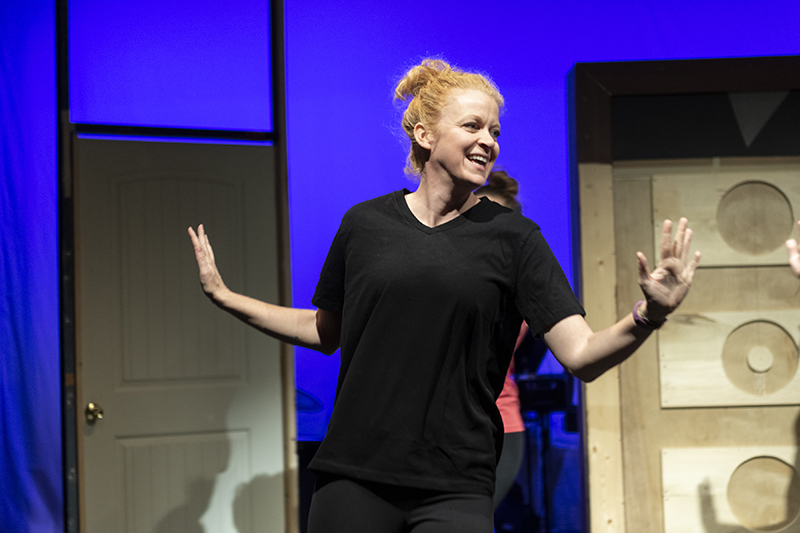 Russell, program manager for IMPACT at Purdue, is one of several people with a Purdue connection involved with Lafayette Civic Theatre’s production of “Lucky Stiff.” Opening night for the show is Nov. 10, and you can find Russell in the ensemble, channeling a myriad of characters throughout the production, which runs through Nov. 19.

More than a dozen Purdue faculty, staff and students involved with “Lucky Stiff,” which Russell says gives her the opportunity to see the results of her day-to-day work at Purdue firsthand.

“I rarely get to engage with students first-hand, but I know the work that I do directly affects them,” Russell says. “With this show, I’ve had the opportunity to spend time with students and get to know them. When they tell me about their day in their classes or their instructors, I’m reminded that the work that I am doing is having a direct impact on their university experience. I think that really illustrates the impact community theater can have on us.”

“Lucky Stiff,” a musical murder mystery farce, is directed by Brian Kocher, assistant director of Campus Living and Advocacy within University Residences. Kocher says this is his first time  directing a show — and it has always been a goal throughout his involvement in community theater. 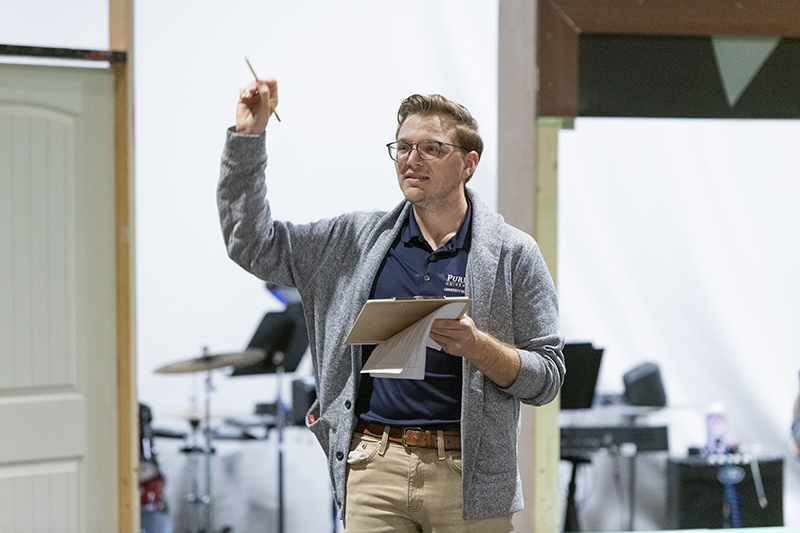 “I came to Purdue in 2016 and became involved with Civic in 2018, and it really brought me outside of my Purdue bubble,” Kocher says. “When you find things that make you want to get involved in your community, it also makes you want to stay and invest in it.”

But it’s not just about faculty and staff connecting with students outside the classroom. Students are not only seeing a different side of Purdue faculty and staff — but they’re making their mark on a community that not everyone calls home.

Jack Loub, a senior studying industrial engineering and theatre from Carmel, Indiana plays Harry Witherspoon, one of the lead characters in the musical. For Loub, working on “Lucky Stiff” has demonstrated how the Purdue community bleeds into Greater Lafayette and vice versa. Loub, for example, has been working with one of his professors to perfect his British dialect for the show.

“That’s not something you can find in every community,” Loub says. “It’s been fun to see how much overlap there is, but also how many people that are throughout our communities that we haven’t met yet. There are professors, staff and students that I would have never had the opportunity to work with if it wasn’t for this show. It has been a joy to get to know everyone on a deeper level and hear their stories.” 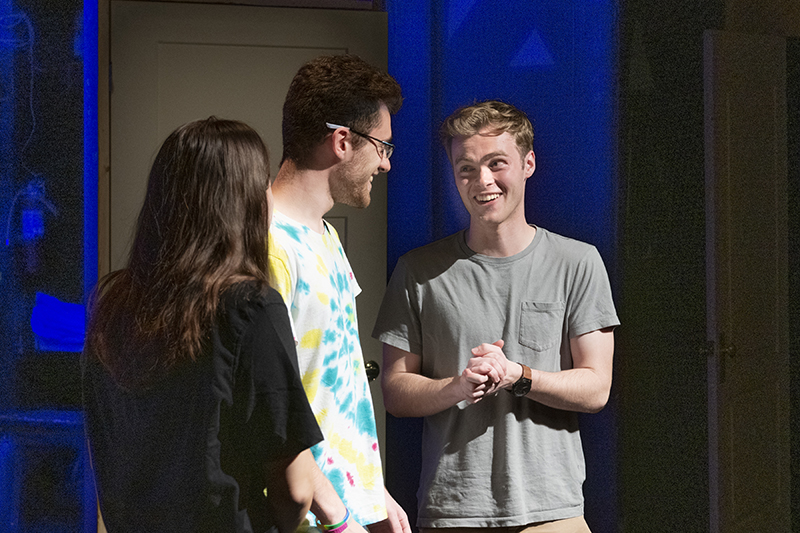 Loub has been active with theater groups on campus, including Purdue Theatre, Purdue Performance Collaborative and Alpha Si Omega, but this is his first show with Lafayette Civic Theatre. He says the experience has helped him develop an even deeper appreciation for community theater — along with helping him realize that exploring opportunities outside campus life can be enriching both academically and personally.

“I’ve been really grateful for every opportunity that has come my way as a Purdue student,” Loub says. “But it’s easy to forget that there are opportunities outside of campus, too. Those opportunities can help you make even more connections.”

Russell agrees, adding that being involved with local theater over the years stretches her creativity and continues to challenge her.

“This bleeds into my work, helping me feel less afraid of learning new skills and reminding me that life should always have an element of fun,” she said.

Lisa Tally, music director for “Lucky Stiff” and a senior editor for Purdue Marketing and Communications, is no stranger to community theater. Tally has played an instrument for more than 20 musicals, including 10 for Lafayette Civic Theatre. The pianist for this production, Tally says the variety of music, and performers, has made this show especially enjoyable. 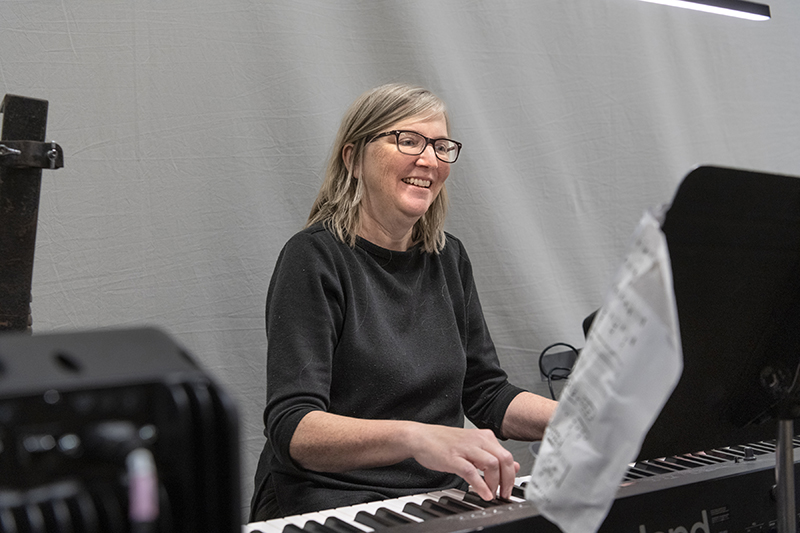 “There’s a wonderful sense of shared community with this group,” Tally says. “It’s amazing to combine the energy, talent and creativity of these performers and crew members and see what comes out of it.  And it’s terrific to see how Civic Theatre provides opportunity to Purdue people and how Purdue people support Civic Theatre.”

Russell’s niece and nephew, Lucy and Mackey Russell, were observing wide-eyed from the audience during a recent rehearsal while their grandma finalized props for the show. As Russell listened to directions from Kocher to smooth out some of the finishing touches before opening night, Russell made sure to acknowledge her smallest fans in the audience.

“We talk a lot about how it takes time and effort to get ready for performances, games, oranything you want to go well,” Russell says.  “It takes a lot of people contributing to make the final product. It’s special to have them be able to see the behind the scenes of that — with the musicians, tech, backstage, actors and director all working through sticky areas together.”

For his first time directing, Kocher says, the cast has “made his job easy.” Even with a group that includes first-timers and veteran performers, he says, it has been a joy to lead a team that works so seamlessly together.

“There’s not much more you can ask for,” Kocher says. “Having the opportunity to watch a group of strangers become friends right in front of me is something I will cherish.”

And when it comes to sharing the stage with friends? Russell says that’s hard to beat.

“There’s always this sense of sadness when a show ends, because you’ve spent so many hours together for weeks and weeks,” Russell says. “But knowing that some of us work and learn on the same campus helps us realize we can and will stay connected. I think we have all enjoyed being able to take a step back from reality each evening for a bit to have fun and be silly for awhile. We could all use more of that in our lives.”

More information about Lafayette Civic Theatre’s production of “Lucky Stiff,” along with ticket information can be found here.

Members of the Purdue community in the cast